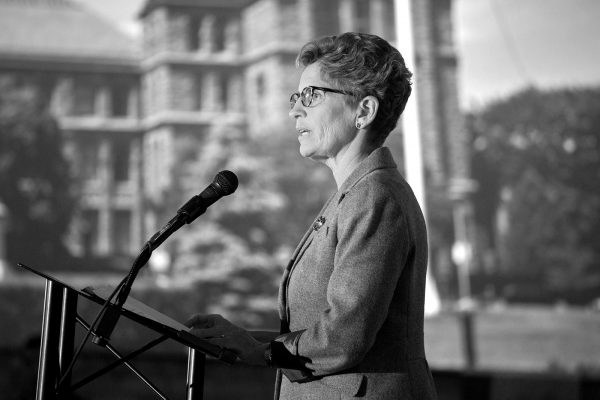 Since the news of the Liberals’ reversal on road tolls for the Gardiner and the Don Valley Parkway began to leak last Thursday evening, Premier Kathleen Wynne has rightly been the subject of much scathing punditry, and I’ll add my two bits here:

What she did, in a way that breaks from her mostly civil approach to politics, was to play Mayor John Tory for a fool. Whatever else you might think about Tory’s policies — and there’s plenty to criticize — he’s been a respectful and accommodating dance partner for Wynne. She could have done better.

But you’ve seen this film before. Last week’s U-turn reminds me of that moment in the spring of 2010 when Dalton McGuinty double-crossed David Miller and withdrew a $4 billion tranche of promised funding for Transit City.

It’s easy to say that all this is just politics. But you didn’t need to be a polling genius to anticipate the electoral risks for Wynne in backing tolls, so it’s not clear why the premier didn’t offer Tory options in the first instance, including the now transparently political pledge – increasing the gas tax transfer to municipalities from $321 million to $642 million — she served up on Friday in Richmond Hill.

The operative words in Wynne’s press release are, “beginning in 2019,” which is to say, after the election the Liberals will lose resoundingly. Ignore all the calculations about how much Toronto’s going to get a few years out. The city is going to get nada, because Tory leader Patrick Brown will win handily on pocket-book issues, of which this new gas tax will be merely one.

All of this puts the fiscal ball squarely back in Toronto city council’s court, and marks, in a very important way, an unavoidable turning point moment for Tory. It is now quite clear that important anticipated sources of capital support for major infrastructure are drying up, and this is happening at a time when several of these projects are seeing dramatic cost escalations.

As has been well documented here and elsewhere, big ticket projects like the Scarborough subway extension, the Gardiner rebuild (now over a $1 billion more expensive than first projected due to a disappearing federal contribution), what’s left of Smart Track and other infrastructure schemes are over-shooting earlier estimates, and in all cases this is happening before ground has been broken.

For much of last year, City manager Peter Wallace was shopping around a, well, graphical graphic (see page 10 of the report) itemizing the $29 billion of unmet capital needs, including about $20 billion for approved transit expansion initiatives. The $200 million from the highway tolls was earmarked to underwrite those outlays; while it was hardly a king’s ransom, the total isn’t chump change, either.

Wynne’s betrayal puts the question Wallace has posed to city council in the starkest possible terms: what he’s been saying since last spring is that council needs to either increase and diversify its revenues or begin triaging these expensive city-building infrastructure projects.

With a public consultation on this long-term financial strategy underway, the options facing the city, and the mayor, are obviously a whole lot narrower today than they were last Thursday. Wallace has bruited the possibility of other revenue sources that would require provincial approval (e.g. a sales tax), and it’s impossible now to see how those would pass muster with Queen’s Park if the road tolls did not (Tory and many on council have already nixed most of these).

While the City will likely continue to receive federal funding for capital projects from Justin Trudeau’s new infrastructure bank scheme, Tory and council increasingly find themselves confronting the reality that municipal politicians in this town work as hard as possible to avoid, which is telling residents that if they want all these benefits, council is going to have to impose the taxes allowed under the City of Toronto Act: surcharges on alcohol, entertainment, tobacco; a parking levy, the dreaded vehicle registration tax, and cordon pricing for the downtown core.

Those options are dutifully explored in this KPMG study, which examines economic and social impacts, as well as case studies from other jurisdictions, but mostly demurs on the question of what the revenue potentials may be for each.

With the second half of his term now ticking down, Tory’s evolving response to this mess may well determine his future as mayor.

Does he turn up the heat on Wynne by sidling up to Brown & Co. or noisily calling her out, as Mayor Mel Lastman did back in 1998, when his erstwhile ally Mike Harris stiffed the City for a promised $200 million grant? Does he actually show courage and leadership by pushing council to approve unpopular revenue tools in the name of investing in the City’s long-term quality of life? Is he going to ask staff to revisit the decision, taken late last year, to keep Toronto Hydro in public hands? Will council force Tory to re-open previous decisions about the Gardiner, SmartTrack or the Scarborough subway, citing a critical shortfall in identified capital funding? Or will Tory, fearing a challenge from some right-wing phantom candidate, retreat into the sort of feel-good bromides that produce lofty strategies (e.g., the anti-poverty plan) that turn out to be little more that policy Potemkin villages? Lots of questions.

There’s little doubt that his team has got to be in the midst of figuring out a significant tactical pivot. After all, if you stepped back from the particular policy moves, Tory in the past several months laid the foundation for the tolls by offering Toronto residents a kind of fiscal quid pro quo: in exchange for heavy-handed budget cuts on the operating side, more outsourcing of public services and a hawkish stance on property taxes, he’d support road pricing and a few other measures, all on the perhaps naive assumption that the premier and her Liberals had his back.

Wynne opted to stab Tory in the back instead of protecting it. Tory so far in his mayoralty has managed to avoid most of intergovernmental acrimony that has surfaced continually since amalgamation a generation ago. As happened with Miller seven years ago, Tory will inevitably emerge from this encounter as a more cynical and mistrustful leader, bitten by realities he’d hoped to smooth over with good manners and respectful rhetoric. If I had to bet on what comes next, I’d predict he’s far more likely to take his anger out on the Liberals than ask Toronto taxpayers to foot the bill for his misfortune.