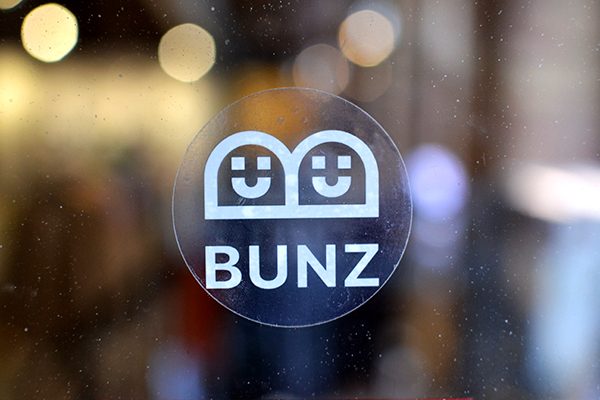 What happens when fare collectors start to become wise to over-turnstile Bunz trade activity occurring at Ossington subway station? The station’s central location made it a popular site for trades but eventually, it became too busy, with instances of trades began getting mixed up; for example, the wrong pair of shoes being traded for the wrong gift card, owned by the wrong Bunz! That’s the joke cracked by Eli Klein, one of the key forces behind the ubiquitous phenomenon that is Bunz Trading Zone, when describing what sparked the idea to create designated “trading zones” in public spaces around the city.

Through data gathered by the app, it is estimated that Bunz users are completing up to 700 trades per day, which means a minimum of 1400 people meeting in public spaces to trade and interact. It became clear that designated public spaces in accessible locations needed to be formalized within the Bunz network, and generated an opportunity for the Bunz community to interact with the local business community in order to foster the platform’s development and improve the quality of community interactions. Klein sees the trading zones as not only important to improving the safety of trades, but as vital to building the community network and fostering interaction between Bunz. He envisions the spaces as encouraging a prolonged interaction between Bunz, maybe over a cup of coffee, in the hopes of strengthening social ties between strangers. He believes that the right environment can generate this, and redefine the context of the relationship between traders.

The popularization of platforms such as Bunz has enabled the rise of an alternative consumerist economy, based on trade, exchange, and interpersonal relationships, rather than traditional capitalist means of acquiring goods and services. Taking this concept to the extreme is Toronto’s Really Really Free Market, which operates once a month out of Campbell Avenue Park. While the concept of the Really Really Free Market did not originate in Toronto, the local chapter has been running for over four years. Powered by volunteers with an aim of creating a “community-space for sharing,” the market rejects not only the traditional buy-sell model but bartering and trading, creating a currency-free space with no boundaries to entry.

As explained by the event’s organizers, the market’s target demographic is people who can normally afford to buy goods but instead, providing them with an alternative mechanism for acquisition, all while reducing carbon emissions and contributing to the circular economy. This being said, the market encourages participation from all members of the community, regardless of socio-economic status. Since the project’s inception, the market has received a tremendous amount of public support, attracting visitors from all around the city. Participation in the market’s events has created friendships between those who partake regularly, forming a community network.

The establishment of this network has brought Campbell Avenue Park into the foreground of the community, with events such as community dinners hosted after the market has wrapped up. One of the market’s organizers, Suzan, described how she once badly injured her hand in the doorway of the building only to have someone spontaneously drop off a bag of ice packs within the hour! Apparently these coincidental instances are a frequent occurrence at the market, with items serendipitously appearing when they are needed, within the day.

Toronto’s public spaces have lent themselves generously to an emerging community-based sharing economy. Whether this is through partnerships with local businesses or parks providing their spaces free of charge, the utilization of these public spaces for activity within an alternative economy has created a valuable new lens through which to view urban space and community building.

The Spacing Store is pleased to announce our launch as an official Bunz trading zone at our 401 Richmond St. W. storefront.