On October 2, 2013 – exactly, as it happens, four years ago today – a certain Detective Constable Khoshbooi, of the Toronto Police Service, swore an information to obtain search warrant, a 474-page affadavit that goes on to lay out, in mind-numbing detail, the minutiae of an investigation focused on Rob Ford’s alleged dealer Sandro Lisi.

Those of us covering the late former mayor ended up regularly receiving PDF versions of these filings – known by their shorthand, ITO – from surprisingly accommodating Crowns involved in the elaborate cat-and-mouse game that connected Ford to a house in Etobicoke, drug dealers, and other suspect activities.

Everyone remembers — orders — Ford’s transgressions differently. But I think it’s fair to say that the revelations about his crack use linger most vividly for most people. “Crack-smoking mayor” will always be part of his legacy.

However, the cavalier behaviour that troubled me most of all — but tended to receive the least attention — involved Ford’s chronic drinking and driving, confirmation of which was contained in the mechanical prose in that ITO.

On page 302, the undercover cops trailing Ford and Lisi explained how, during a covert operation carried out in August of 2013, they’d seen the two men disappear into the bushes in a park near Lawrence and Royal York. 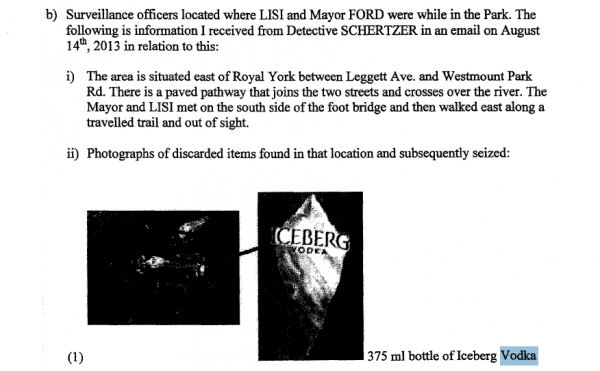 “Surveillance officers were able to locate the area in Weston Wood Park where LISI and FORD met, a vodka and juice bottle were seized from this spot,” according to the ITO’s noir-ish prose. Mayor Ford, it stated, “was observed boarding his Escalade” and “left to run out of the area.” The cops, however, tailed Lisi.

The document also includes photos of the retrieved vodka bottles. The mayor and his sidekick appeared to enjoy Iceberg.

This wasn’t the only such occasion, and there were also frequent photos on social media of Ford standing in a check-out line in various LCBOs, bottle in hand, waiting to pay. He was once photographed reading documents while driving his great big SUV, and that story – which may or may not have involved alcohol – came on top of others where he is on his phone or flipping the bird at someone while at the wheel. Ford, it can be said, drove like a man who didn’t give a shit.

In this city, the mayor’s primary task is to take responsibility for the public realm. And it is interesting to me that while Ford professed to love his constituents and love the city, he also had a grave, and likely pathological, disregard for the safety of those ordinary Torontonians who happened to find themselves in that extensive public space known as the road network.

The fact that Ford never injured or killed anyone while he was driving under the influence can only be described as blind luck. His fate, and the city’s, did not come to include horrific incidents like Marco Muzzo’s t-bone collision with a mini-van that ripped the heart out of an extended family.

Was it because Ford could hold his liquor? Perhaps he was buying all that booze for friends. Maybe, in those bushes in Etobicoke, Lisi gulped back the Iceberg while Ford sipped the OJ.

Most likely, it was just freakish luck. More relevant is this point: there are hundreds or thousands of people living in Toronto who happened to share a road with Ford after one of those binges, but somehow stayed out of harm’s way.

If Ford had run over someone – an incident that would have set in motion a tortuous process of recrimination — Mayor John Tory almost certainly wouldn’t be proposing that the stadium in Centennial Park be re-named in his honour.

We would know Ford in the way that people will always know Marco Muzzo: as the guy who killed or maimed someone because he felt like he was above the law.

To my mind, the fact that Ford never did cause a DWI tragedy is entirely beside the point. What’s more, it astonishes me that Tory opted to reach for a cheap political gesture instead of considering more closely the gravity of the way Ford chose to recklessly endanger those whom he professed to represent.

It’s also worth noting the irony that the mayor’s idea has surfaced at precisely the moment when many people are asking tough but important questions about which historical figures get to have their names and images commemorated for time immemorial in public spaces. In the southern U.S., some cities have been pulling down the statues of notorious figures associated with the Confederacy, many of them erected during periods of rising racist sentiment in the early 20th century.

Here in Canada, the Trudeau government in June moved to rename the Langevin Block, home of the prime minister’s office, as an acknowledgment of Hector Langevin’s advocacy of residential schools.

So in light of both the local and broader context, I’d say it’s entirely appropriate to ask what John Tory was thinking. Or if he was thinking.

Yes, Ford was movingly dedicated to his high school football players. Yes, he had a certain gruff charm that endeared him to many people from a wide range of backgrounds. But his addictions were not merely tragic character flaws. They were public acts. His entitled and irresponsible driving could have destroyed lives.

Ford was way offside. And with this terrible idea, so is his successor.