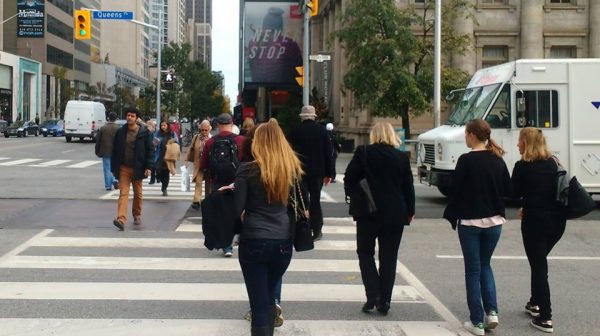 The spectre of “distracted walking” apparently haunts our streets. The scare has been raised again through a private member’s bill proposal by Ontario Liberal MPP Yvan Baker, which would impose fines on people crossing the street holding a cellphone, or using some other “electronic entertainment system” (presumably including iPods and such), although not, weirdly, on people already talking on the phone when they start crossing.

Lloyd Alter, Matt Elliott and many others have already pointed out how these kinds of laws are a red herring that misdirects attention towards the victims and away from the factors that create danger (driver inattention, bad infrastructure), and how these laws are not supported by the actual statistics.

However, I’d also like to bring to the debate the way that these laws make no sense in terms of the rules of the road.

Let’s imagine a pedestrian who is, foolishly, crossing the road while texting. There are two possible scenarios:

A) The pedestrian is crossing without the right of way (e.g. the light is red or there are cars coming in a mid-block crossing).

In that case, the pedestrian is already breaking the law. There are laws and bylaws in place that forbid this dangerous behaviour, and the pedestrian can be charged under them. There’s no need for an additional law.

Which means the law mainly applies when:

In this case, the pedestrian has the right to cross under any and all circumstances, and it’s up to drivers not to hit them. If there is a collision, it is clearly the driver’s responsibility. It doesn’t matter what the pedestrian was or was not doing.

Of course the pedestrian should pay attention, because there are some aggressive or irresponsible drivers who might endanger them, and it’s smart to do everything possible to avoid getting hit. But it’s not up to the pedestrian, it’s up to the driver to avoid a collision.

That law also protects people who could watch out but aren’t, whether it’s because they are texting or for any other reason. It may be irritating to some drivers that some pedestrians aren’t showing fear, but that’s irrelevant. On Newstalk 1010, host Jerry Agar asked me if pedestrians should cross the streets blindfolded. Not by choice, of course — but in an Ontario that conforms to the Accessibility for Ontarians with Disabilities Act, which says that people with a disability should be able to navigate our streets safely, that is precisely the test — you should be able to safely walk across the street blindfolded when you have the right of way.

“Distracted walking” laws like this one create the impression that pedestrians somehow share responsibility with drivers if they are hit while crossing with the right of way. They do not — the responsibility lies solely with the driver, and the laws needs to reflect that fact.