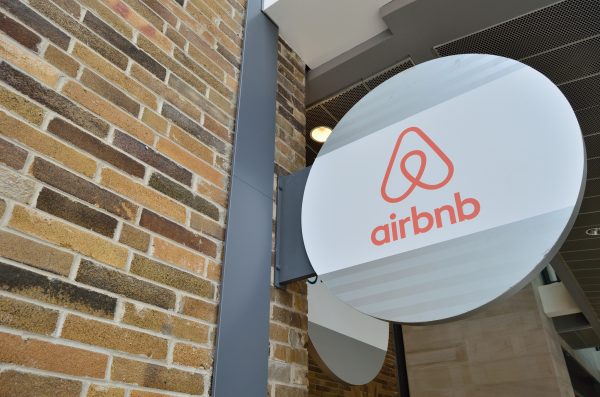 As housing prices continue to soar in major cities across the world, Airbnb’s profits are following suit. This is not a coincidence. In fact, my own research into the rise of digital short-term rental platforms suggests their implications for cities like Toronto are far larger than the local politics of neighbourhood disturbances and disruption of condos might suggest.

Whether you are a middle-class homeowner seeking a flexible means of paying your expensive mortgage, or a renter struggling with more and more of income going to your landlord, the ‘Airbnb problem’ boils down to a common condition: decades of housing policy have turned our homes into investments rather than places to live.

In fact, this narrative is explicitly acknowledged in Airbnb’s public policy communiques. According to the company’s story, while contemporary capitalism is forcing more of the middle class into circumstances of housing insecurity, Airbnb is “democratizing” capitalism by simultaneously making tourist accommodations more affordable and putting that revenue into the pockets of middle class locals. While this claim is justified by the platform through slick infographics which signal at transparency, in reality the company answers few questions of value to those concerned with the platform’s interactions with the housing market.

For researchers asking these questions, a key task has been distinguishing between listings that might constitute “homesharing” from those that could be considered full-time hotels.

On the one hand, it is true that short-term rental platforms might provide a means for owners and renters to confront their economic uncertainty through the part-time practice of “homesharing.”

On the other, it is clear that the platform is also used as a tool for speculative investors and entrepreneurs to access a global pool of rental demand, opening up their space internationally to the highest bidder. In fact, this happens to be the dominant use of the platform. In Toronto, almost 60% of the profits made by Airbnb from June 2016 to May 2017 went to this class of commercial hosts, who on average kept their unit off the market for approximately 250 days of the year. And where Toronto’s shrinking rental vacancy rate now hovers around 1%, these listings accounted for 0.85% of all rental listings across the city. 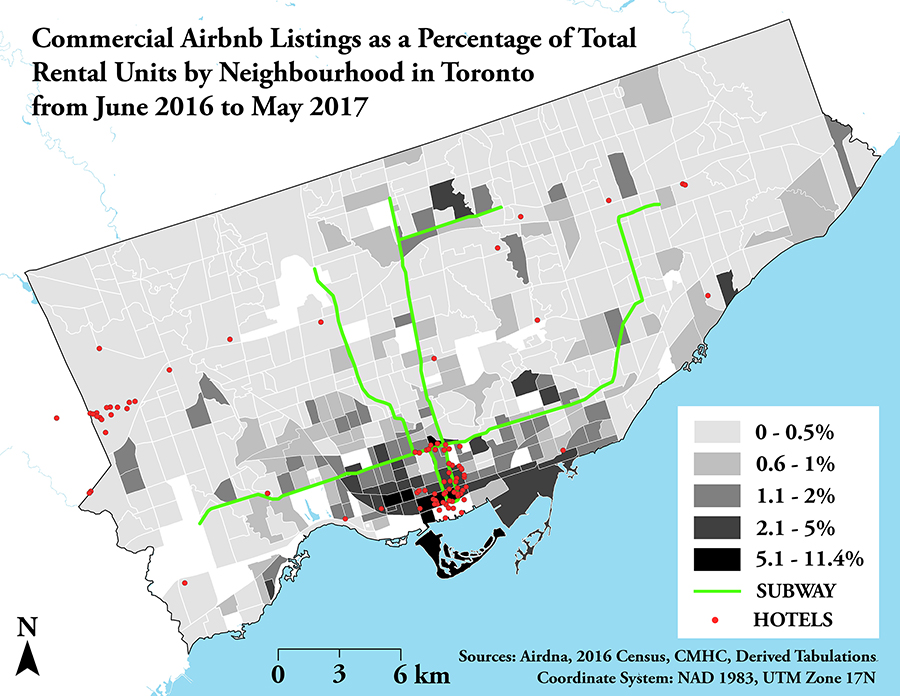 The Airbnb listings are also operating in a very concentrated part of the city. Approximately 70% of these commercial listings were located in only 10 neighbourhoods in downtown Toronto, accounting for upwards of 5% of the rental stock in around Trinity-Bellwoods and the Waterfront Communities [see MAP 1].

Based on these findings, it is clear that without Airbnb, this city’s unhealthy vacancy rate could be significantly addressed. Even at a citywide scale, the number of full-time Airbnb listings clearly represents a significant cannibalization of existing long-term rental capacity. And as innovative research by professor David Wachsmuth and his Urban Politics and Governance lab at McGill is showing, the share of commercial hosting has been increasing year over year in cities across Canada.

A key ideological debate at the heart of Toronto’s housing question is the extent to which the government has the right to force a homeowner’s hand in renting their property on the traditional market. Successive governments, primarily at the provincial and federal levels, are responsible for this conundrum in a number of ways.

First, private homeownership has been incentivized as a substitute for the gradual rolling back of the welfare state. In these times of austerity, many individual’s security in old age is now dependant on their ability to squeeze as much value out of their property (and tenants) as possible. In the context of an inflating housing market, this system is sowing novel political divisions between renters and homeowners.

Second, for almost three decades, governments have mostly failed to build, or incentivize developers to build, new purpose-built rental stock. In Toronto, high rise condominiums, many of them luxury units, accounted for 86% of all new housing stock built in the last ten years. Purpose built rental units only accounted for 1%. This means that all new rentals are now only supplied to the market at the behest of homeowners. As a consequence, many simply sit empty.

In the absence of short-term rental regulation, as well as incentives to make private units available to the traditional rental market, it currently makes financial sense for landlords to consider the short-term rental market instead. This trend is also accelerated by the recent expansion of various intermediary hosting services which will do the work for hosts, from house-cleaning, to managing bookings, etc. 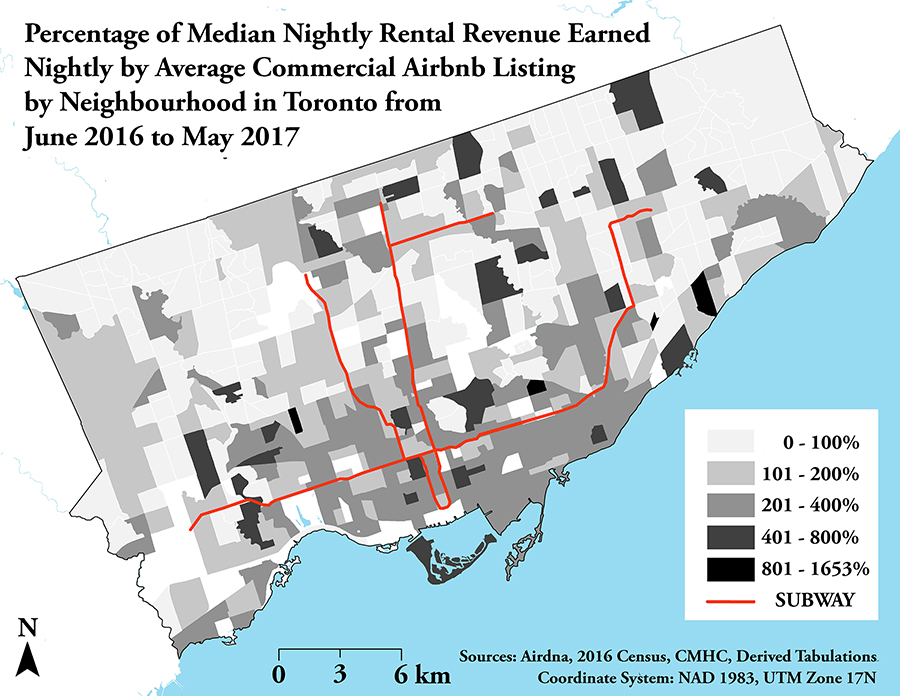 In Toronto’s most impacted neighbourhoods, the average full-time host only needs to rent their unit for half the year to earn what a traditional landlord makes on the long-term market (see MAP 2). Consequently, these landlords can avoid both the responsibilities of the Residential Tenancies Act, and the regulations required of the hotel industry while simultaneously de-intensifying the use of their unit and keeping it liquid to flip on the real estate market.

I love to travel and generally balk at the idea of spending my money in contrived tourist districts. Like many, I prefer to be where the locals are and this is a predilection Airbnb has successfully exploited. However, insofar as the middle- and working-class locals, who are the very source of this `authenticity,’ continue to be displaced from inner cities, the Airbnb project must be called into question.

Where investors are given free reign to list their units on the global rental market, the housing infrastructure of inner-city neighborhoods is vulnerable to being restructured into increasingly contrived tourism destinations, devoid of locals, rather than places to live.

So, what’s next for Toronto? City Council almost unanimously approved a comprehensive suite of regulations for the short-term rental industry in December 2017. However, what appears to be strict regulation on paper will only be as good as its enforcement in practice.

These regulations are currently being appealed to the Ontario Municipal Board for possible re-evaluation. Meanwhile, Parkdale is rapidly gentrifying and investors continue to park their capital in condos across the city while Airbnb capitalizes on Toronto’s soaring unaffordability. As such, this debate will continue to be important regardless of the outcome.

In my mind, Airbnb’s narrative of “democratization” raises important questions around access. Who has the right to access the city and to cultivate a sense of place there? Insofar as authenticity stands for quality of place — produced by people in common — the Airbnb-ification of Toronto’s most fashionable, and profitable, communities exacerbates the enclosure of those communities from those who made them fashionable and profitable in the first place.

This issue raises foundational political questions. Money buys power in our democracy, tipping the scales of power in favour of those with the capital to amplify their voices. This analogy also holds for urban space. As cities become playgrounds for the highest bidders on the world market, servicing the investments of a shrinking share of society, fewer locals will be able to compete. I think their contributions to our urban spaces would be sorely missed.