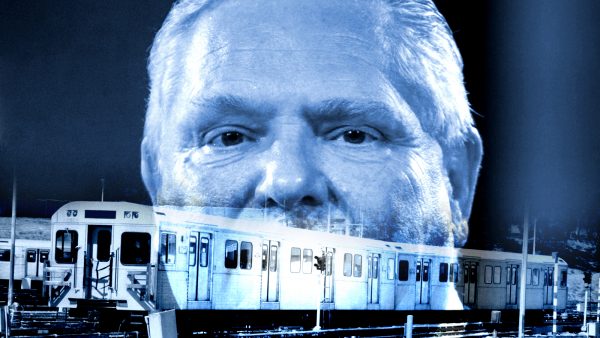 Because we here in Spacing’s bustling newsroom like to provide informative and constructive analysis to politicians of all stripes, we felt it would be helpful to cost out the new premier’s plan to extend subway service to Pickering.

I will assume, for the purposes of Spacing’s initial feasibility study, that the Ford Extension™ will run from Scarborough Town Centre to Pickering Town Centre, which, truth be told, is really the only place for a subway to go in that part of the 905. According to Google maps, the distance between the two regional mall/mobility hubs is about 17.1 km, assuming the crow flies over Highway 401.

The route is traversed by no fewer than three of the GTA’s river/ravine systems – Highland Creek, the Rouge River and Duffins Creek, and would obviously have to dip under the 401 at some point. In short, it will have to run in an extraordinarily deep tunnel, just like the Scarborough Subway Extension does.

Speaking of which, the going rate for a kilometer of subway is about $580 million, which is based, of course, on the amount we’ll be spending in virtual perpetuity for the 6.2 km Scarborough line. Taxpayers have been repeatedly assured — by Mayor John Tory and others — that this monumentally wasteful boondoggle will cost $3.5 billion (although no one really believes that figure). The number would be higher if there were stations, but let’s not get into that.

If we round up to $600 million, that means a mostly stop-free straight-shot subway between STC and Pickering would cost about $10 billion, but that’s in 2014 dollars, which is when the extension funding was secured. In 2021 dollars, or whenever Doug Ford needs to remind voters in the east end of the GTA that he’s brung home the electoral bacon, the number will be, well… Don’t even bother.

It’s hardly worth mentioning, but I shall do it anyway, that GO currently offers express bus service from STC to Pickering Town Centre. It runs every 20 minutes. The cost is probably a gazillionth of what the subway will require, but the good people of Pickering deserve a subway, and so they shall have one.

Another point scarcely worth noting is that the outlay for the Ford Express™ would be about twice the amount the premier-designate claims he’ll cut from the province’s $150 billion+ budget. Anyway, I’ll leave it you to do the math.

Perhaps in the way that Donald Trump has emboldened racists and thugs, Ford will encourage more ridiculous transportation ideas to emerge from their richly-deserved hiding places. How else to account for the Toronto Region Board of Trade’s pitch to deck the busiest sections of Highway 401 – a proposal (see page 14) that caused John McGrath, my colleague at TVO’s The Agenda, to express a desire to end it all.

Packaged as one of three “bold” ideas to address bottlenecks and cargo movement around Pearson, the TRBOT document claims that, based on an elevated section of a highway in Texas, we could add six tolled lanes in the air above the 401 for somewhere between C$4 billion and $10 billion for 20 to 50 km.

The report is more than a little misleading. The Texas project – one in Austin, based on another in Dallas – envisions a three-level highway mainly through a relatively short stretch running through the downtown, with tolls at the lower levels. TRBOT neglects to mention that the I-35 through Austin is merely a six-lane highway with plenty of land on either side, whereas the 401 around Pearson is anywhere from 12 to 16 lanes across, with not much right of way left over at the edges. Decking it poses a far more formidable engineering and logistical feat, resulting in a gigantic object that would likely cost at least twice as much as what the State of Texas intends to ram through downtown Austin.

The blindingly obvious question is this: does Ontario really need to be taking its transportation planning cues from a jurisdiction that barely does land use planning, operates not a single kilometre of subway and venerates its highways?

To be honest, I shouldn’t even waste pixels writing about such matters, except to point out that previous schemes to add layers to various highways around the city have inevitably floundered because they make no sense, financially or structurally.

Senator Jerry Grafstein, for a while, shilled for a crazy private scheme to run a tolled tunnel under the Gardiner/Lakeshore corridor. And in the early days of the Toronto Waterfront Revitalization Corp., there was a more developed public plan to bury the Gardiner in a tunnel through the central core. Inevitably, these ideas died a deserving death because the sheer space and cost required to shift fast-moving vehicles up or down a level is so onerous as to render the whole scheme unworkable.

Then, four or five decades after it is completed, the damn thing begins to crumble like so much stale feta, just like the Gardiner did, except there will be a lot more salt-soaked rubble raining down on a far busier stretch of road.

Why TRBOT reached for this particular solution is totally beyond me, unless the organization — which in the recent past offered cogent and important advocacy on transportation planning — has been seized with an overwhelming desire to be ridiculed. Sure, it’s a bold idea. Mostly, though, it’s a bad idea.

Here’s a better idea: more transit! In recent weeks, I had to travel regularly down to the Distillery District for a project: the St Clair West streetcar in its right of way to the subway; the subway to King; a wonderfully speedy streetcar ride east along the freshly de-congested King, then jogging south on the new Cherry Street loop now serving the West Donlands. All excellently synchronized, in new vehicles with multi-door access, and transfers smoothed by Presto cards. For the first time in my life, I felt like transit in Toronto had become positively European in its seamlessness.

Oh yes, and at no point along this journey could I detect evidence that the sky had (as so many naysayers boldly predicted) fallen.

My wish is that when politicians, planners, advocacy groups and citizens talk about moving about in a city encumbered with world-beating congestion, they’ll focus on cost-effective solutions that have been thoroughly tried and tested in all those places in the world that no longer have world-beating congestion. My fear is that we will, instead, waste the next four years debating dumb ideas that burn through vast reserves of civic energy before finally exploding on the launching pad.