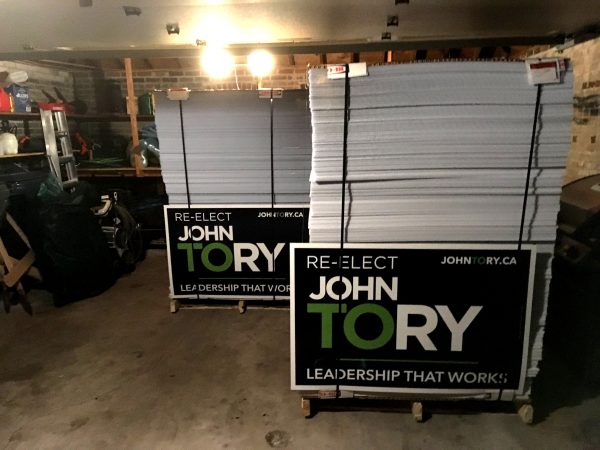 During his years out of office – between the end of his stint as the leader of Ontario’s Progressive Conservatives and his victory in the 2014 mayoral election – John Tory spoke often, and with what seemed like conviction, about the city’s wobbly fiscal foundation. On his radio show, through Civic Action and in numerous interviews, he opined regularly about the importance of establishing new revenue tools, like a sales tax, to fund transit and other city-building projects.

But during his four years in office, the activist version of John Tory was eclipsed by the one running for re-election today, a politician who has made a virtue of keeping property tax hikes at or below the rate of inflation (a table stakes move in Toronto politics) and boasts about “killing” a proposed storm-water surcharge on large paved properties to finance increasingly necessary flood-mitigation measures.

At the Toronto Region Board of Trade debate tonight, he will assure a business audience that these stances exemplify leadership. But to my eye, they reveal the way he’s cynically washed his hands of one of the core responsibilities of the mayoralty, which is ensuring the fiscal sustainability of the services the city provides to residents. What’s more, afraid of being castigated for unpopular budget cuts, he has, instead, pushed to approve wildly expensive projects on a wing and a prayer.

Lest anyone read the foregoing commentary as mere lefty spin, take a look at the consequences of a once unpopular fiscal choice — former mayor David Miller’s push, in 2008, to get council to adopt a municipal land transfer tax (MLTT) to diversify the city’s revenues.

The current mayor voted for each and every one of these budgets, and has never so much as sleep-talked about the prospect of repealing the MLTT.

Here’s what all that revenue actually bought for Torontonians:

In 2015, the MLTT paid for the Toronto Fire Service ($432 million) or Parks, Forestry and Recreation ($438 million) or the public health and library divisions together. Pick which one you would have preferred to eliminate in its absence.

In 2016, the MLTT covered the cost of either fire services ($434 million), parks and recreation ($450 million) or the combined budgets of public health and the public library system ($436 million), as well as all outlays for planning ($95 million).

In 2017, the MLTT paid for the combination of parks and recreation and libraries ($656 million), or public health plus children’s services ($728 million), or the city’s entire fire and paramedic expenditures ($651 million).

And in this year’s budget, that dreaded tax — which the real estate industry erroneously claimed would kill the market back when it was passed — paid for planning, parks & recreation and libraries combined; planning, fire and paramedic services combined; or every single long-term care bed and subsidized daycare space in Toronto.

Now consider what Tory has brought in in terms of the city’s revenue picture. During his four years in office, the aggregate increases in property taxes amounted to just $580 million – a sum that doesn’t quite cover the interest the City paid on its accumulated debt in 2018 alone.

You do the math.

(Clarification: In late 2016, Tory pitched a road toll scheme for the Gardiner and the Don Valley Parkway, with estimated revenues of $200 million per year earmarked for an infrastructure capital fund. The plan, derided by some as simply a way of paying for the $1.5 billion Gardiner re-build, required provincial approval,. But Liberal premier Kathleen Wynne pivoted from a yes to a no after her 905 caucus members balked. Officials in the Tory’s office say that in the aftermath, Queen’s Park pledged to gradually increase gas taxes starting in 2019, with a potential windfall to the City of $170 million per year. But given Doug Ford’s pledge to cut gas taxes, it seems highly unlikely that Toronto will see much in the way of new funding.)

My point is that to a degree that most Torontonians don’t realize or won’t acknowledge, this single additional tax, though controversial when adopted, has allowed the City and Council to perform some of the most basic functions residents expect from the municipality.

Not only did the sky not fall when the MLTT came into effect; it’s fair to say that without these additional revenues, Toronto residents today would be living in a city that does scarcely more than the bare minimum in terms of service delivery.

Yes, municipal officials would keep the traffic lights (mostly) working and the sewers from crumbling. But we’d have long ago forfeited those amenities that make Toronto livable, equitable, peaceful and safe.

So pick your poison. I know what I’d choose.

Miller, it must be said, had not only the courage of his convictions; he also knew the math, and could see where the city’s unsustainable financial condition would lead. To my eye, the hallmark of civic leadership is anticipating future crises and finding ways to avert them, even if that means absorbing cheap shots and criticism from those who have always griped about the cost of local government.

I assume Tory understands these numbers, and he has surely read the long-term fiscal forecasts city staff produces each year. Given the foregoing, his intransigent disinclination to make difficult but necessary choices is simply breathtaking. Indeed, I’d argue that the late Rob Ford was far more honest in his approach. He genuinely believed the city should do a lot less than it does, and tried to bring about that result with a program of aggressive budget cutting.

Tory, of course, wants to have it both ways: he craves to be seen to be a progressive city-builder who promotes hugely ambitious projects like Rail Deck Park, Smart Track and the Scarborough subway extension, as well as (cosmetic) equity gestures, like free transit for kids or the city’s anti-poverty strategy.

But when it comes to paying the piper, Tory won’t spend so much as a cent of his political capital — of which he still has plenty — and instead pledges to pay with money the city doesn’t now have and may never, in fact, receive.

Recall, as well, that two budget cycles ago, former city manager Peter Wallace, a bureaucrat with reams of experience, sternly warned council and the mayor about the looming structural deficit ahead.

Citing $29 billion in unfunded projects in the city’s long-term capital budget and the pressing need for additional operating revenues, he likened Toronto’s problems to the risks facing a smoker who has yet to be diagnosed with lung cancer. “As a public servant,” he told a University of Toronto audience, “I take risks with great seriousness; I advise that risks should be mitigated, managed, and minimal. And right now, we are very heavy smokers in the City of Toronto.”

Tory irresponsibly ignored Wallace’s advice, and did so at a time when the political likelihood of gaining acceptance for new revenues was high. If he wins this fall’s election, he’ll almost certainly have to contend with downloading from the Doug Ford government at Queen’s Park, as well as yanked funding to signature projects (my bet is that the Tories will ice SmartTrack, redolent as it is of Liberal influence).

What’s more, I’d say it’s highly likely that Ford, with his obsession for meddling into the city’s business, will gladly veto any attempt by Toronto council to pass new taxes or levies, even those currently allowed under the City of Toronto Act.

Tory’s moment, in other words, has probably passed. While I suppose there’s a chance he may try to introduce more revenue tools in his second and presumably last term, I’m not holding my breath. The mayor is not going to become a bold leader at this late stage in the game.

So to the business leaders who will be present at tonight’s debate, I’d like to pose two basic questions: Do you really believe Tory has made the tough but necessary choices that will fortify the city’s balance sheet and mitigate the fiscal risks it will soon face? And would you run your companies this way?

An honest answer to both would be no, and that, ultimately, is the harsh verdict that must be rendered on John Tory’s record in office.