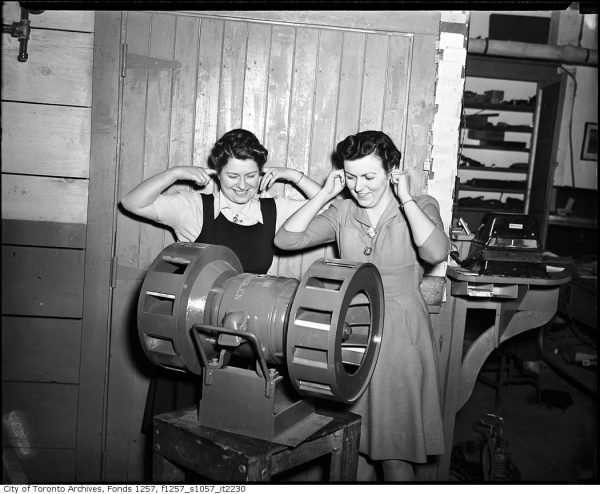 Sitting on my second floor balcony – a laneway and a row of houses separating me from Dufferin Street – I often find myself yearning for the sound of silence. In the summer, I daydream about sitting cross-legged on a wooden dock at dusk, relaxing to the sound of my breath and the ebb and flow of the lake lapping against the rocky shore. As the leaves begin to change from green to orange, I picture myself in the forest on a hike, stands of maples stretching as far as I can see. The only sound is the wind rustling through the leaves overhead and the crackling of twigs beneath my shoes….

Until the obnoxious roar of a motorcycle jerks me back to reality.

While some may joke that my longing for quiet is a result of getting older, I think it might also be a symptom of an increasingly noisy urban environment.

Where, in a city, do people go to find quiet? While a trip to a cottage or a provincial park is one way to escape, both are time-consuming and too costly for many Torontonians.

Toronto’s parks and ravines are the obvious local option. With my recent online purchase of decibel meter, I’ve been traversing city parks in search of quietest spots. The small, inexpensive handheld device measures sound within seconds – point, click and decibel reading appears on the screen. It allows me to conduct guerilla style urban research.

On a recent trip to High Park, for example, the noise standing at the edge of Grenadier Pond registered on average 20 decibels lower than at the nearby intersection of Keele and Bloor.

Yet, the majority of our time outdoors is not spent strolling along the Humber, the Don, or the Scarborough Bluffs Trails. Rather, it’s spent shuffling from home to the bus stop or subway station to run errands at a grocery store or get to or from work.

The question is, if most of our time spent outside are on streets, should they be quieter?

TPH’s 2017 study on the health impacts of environmental noise found that 60% of Toronto’s noise pollution can be attributed to traffic. Noise induced hearing loss aside, the research documents other non-auditory health impacts, including adverse cardiovascular effects, cognitive impairment, sleep disturbance and mental health issues. The research also found that the poorest neighbourhoods are the loudest ones, raising environmental equity concerns.

As the study’s title cleverly asks: How loud is too loud?

That’s a topic I think about often, especially sitting on my balcony or as I write this in a local coffee shop, struggling to hear my own thoughts as Metric’s catchy “Gimme Sympathy” blares through the speakers overhead (my decibel reader is flashing 77 dBA).

A-weighted decibels, or dBA, is the unit of measurement used to express the relative loudness of sound perceived by humans. To illustrate the spectrum, a quiet library will typically measure approximately 40 dBA, while a jet flying overhead — think the annual Canadian International Air Show during the CNE — could reach 110 dBA.

Toronto Public Health suggests the threshold of prolonged exposure to urban noise before potentially experiencing health impacts is 58 dBA, yet the average daily noise levels in the City registered 62.9 dBA with recordings at individual location ranging from 50.4 to 78.3 dBA.

In my own research, the only outdoor spaces that recorded levels lower than 58 dBA were the interior of parks and low-rise residential streets. By comparison, decibel levels reached 100 dBA in the 500 section of the SkyDome during a Blue Jays game and 78 dBA standing on the sidewalk at the intersection of Bay and Front just after 5:00 p.m.

I fully recognize that a certain level of street noise is to be expected, and on occasion elevated noise levels are warranted. Housing would not be built without cement trucks; roads not repaired without jackhammers. It’s hard to argue with elevated noise levels for events such as Pride or the Santa Claus Parade – they are what make city life exciting, but some level of regulation is needed.

TPH’s study is being used to inform updates to the City of Toronto’s noise bylaw, which restricts construction (the largest culprit of noise-related complaints received by 311) from 7:00 a.m. to 7:00 p.m. during the week, and from 9:00 a.m. to 7:00 p.m on Saturdays.

The bylaw defines noise as unwanted sound and specifically limits noise in quiet zones, which are defined as properties used as hospitals, senior’s residences and residential areas. Acknowledging Toronto’s vertical growth outside of traditional residential streets, the bylaw was updated ten years ago to protect all residential areas, not just those living in “low rise” neighbourhoods.

This definitional extension is especially important since most, if not all, of Toronto’s population growth is happening outside of what has been termed by Gil Meslin as “yellowbelt” (i.e., the land use colour and associated Neighbourhoods policies in the Official Plan).

The location of the city’s new residential population is mainly in high-rise condo towers typically built on or near busy commercial corridors which are wider, have higher speed limits, and are lined with retail, restaurants and bars. By design, all those urban elements makes these towers noisier.

A person standing at the corner of any major intersection is likely to experience noise levels at least 20 dBA higher than in the interior of a low-rise neighborhood. So stepping out for a quiet evening stroll often isn’t possible if your home is located at King and Spadina.

Since 16-metre-wide streets lined with single detached houses will always be quieter than a 27-metre-wide arterial lined with 30-storey mixed use buildings, it’s arguably futile to hold all residential streets to the same noise standards. But if we could mitigate prolonged exposure to excessive noise by providing people living on main streets with alternatives, it would go a long way to improve livability.

Programs such as Open Streets, which closed 5.5 kilometers of Yonge and Bloor to motorized vehicles on two Sundays a year, is an honest start. My noise readings at intersections along those streets during the event registered approximately 20 decibels lower than on a regular Sunday when cars are permitted.

Similar programs in New York, Chicago, San Francisco, and Mexico City are part of what many planners call an urban renaissance. While the intention is to turn utilitarian rights-of-ways into social spaces and offer an opportunity to experience public space in a different way, noise levels are inevitably reduced in the process.

Without wading into a debate about car-free downtowns, planning more than two Open Street days a year seems like a good place to start. Noise could be used as an indicator to determine the success of initiatives such as the King Street Pilot or be incorporated into Jan Gehl’s Public Space Public Life surveys that many municipalities (including Toronto) have been undertaking to understand how to improve the quality of public spaces. Other initiatives could include limiting truck traffic to certain times of day and reducing speed limits on arterial streets. These moves would not only improve safety, but also help to provide a more peaceful urban experience for pedestrians and cyclists alike.