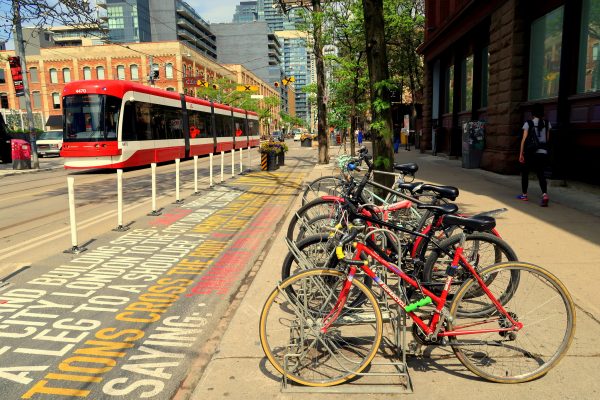 This is probably a pointless plea, but can we stop talking about congestion?

Our conversations about transportation in Canadian urban regions these days all centre on “congestion.” The cost! The frustration! The pollution! All bad things, I agree.

But I don’t think congestion is our biggest problem or even the problem it presents itself to be. It frames the city and its issues in ways that may even be counterproductive.

This focus on congestion is especially worrisome when it comes to transit. Transit projects are often justified because they will “reduce” or “solve” congestion.

In registering its support for a multimodal hub at Pearson Airport, the Toronto Region Board of Trade listed the reduction of congestion first among anticipated outcomes of the project.

Problem A with this thinking is that transit will not do that. Or, at least, not as much you might hope.

Some consider it the “Fundamental Law of Highway Congestion”: a reduction of traffic congestion by transit or any other measure will eventually be reversed when drivers discover the road has improved.

At best, transit will help you avoid congestion, if you take transit and if that transit is in its own right-of-way. Plus, transit needs to provide sufficient capacity for its ridership or it will experience overcrowding – another form of congestion.

Problem B is that solving congestion is not the point of transit. When we focus on congestion, we forget what transit really accomplishes. Even transit advocates change the way they talk and think about transit.

Transit advocates sometimes call for congestion pricing as an answer to poor transit service. The hope is that the funds raised by congestion pricing will flow to transit agencies for improved systems and service. A further hope is that the cost will deter some drivers and we will have fewer cars on the road, or at least the roads subject to pricing.

(Some places have dirtier air than others, but a car is a car no matter what road it’s on, and there’s only one environment. Reduce the need to drive. Tax all drivers in an urban area. Charge for parking always and everywhere.)

I’m not against congestion pricing in theory, but it’s no silver bullet. And there’s lots of evidence that it’s not essential nor even the most effective way to shift people from driving to transit or active transportation. (See, for example, Seattle and Vancouver, cities that made huge improvements without congestion charges.) While the cost of mobility has some impact on mode choice, it is speed, frequency, reliability, safety, and network and landscape design that have the biggest impact.

My purpose here is not to debate congestion charges, but to question our obsession with congestion, and how it then frames our thoughts about mobility.

City life is interdependent. Everyone regularly has to go somewhere else to meet their daily needs. Mobility is thus essential to the well-being of a city’s residents and economy.

Modes of mass transportation are, first and foremost, efficient. Their efficiency becomes beneficial and often essential when the movement of people and goods is at the scale of a big city.

Its efficiency is also necessary in urban space, which is more compact than suburban or rural landscapes (its compactness is also part of a city’s efficiency). Urban space is also used by a high volume and diversity of users. They use its space simultaneously, but differently. They move by different modes and in different directions.

It is useful at this point to remember how often the same space is used every day by thousands, even hundreds of thousands of people. Urban space must be designed to accommodate this temporary usage and fluid motion.

Mass transportation is necessary to accommodate the geometric limits of city space and its diversity of uses for distances beyond comfortable pedestrian travel. Pedestrian travel includes those escorting children, pushing strollers, using a mobility aid of any kind (wheelchairs, walkers, crutches, white canes, etc.), or carrying goods. This diversity of pedestrians means that “comfortable” distances will vary by person and with the weather. We have to assume that we need mass transit even for what seem like short, walkable distances.

Mass transit is environmentally efficient. One bus has the equivalent CO2 emissions of as many as 10 cars. The operation of electric buses has zero emissions.

Most importantly, mass transit enables economic participation and citizen well-being. This is what we mean when we say things like transit is “the lifeblood” of a city: because it does the most, in the most efficient way, to move people and goods around in a city, and the city cannot survive without it. The circulation of people and goods is necessary to distribute and consume resources in an urban economy. Improved circulation creates opportunities and the ability to access them.

Economic inequality in cities is a bigger problem than congestion, and it’s a problem that transit can genuinely and sustainably help address.

Congestion is a problem we want to make better, but urban roadways in a busy city will always have some. Above all, “solving” congestion is not the most important aspect of transit. Good transit planning isn’t a “fix”; it is an investment in the lives of a city’s residents and in the wealth of the city as a whole. It is always worth the effort to provide good transit governance, funding, planning and service. Without them, a city will not thrive.