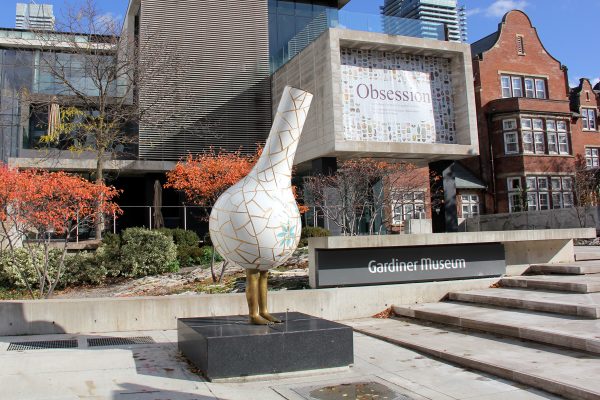 A new piece of public art has been added to Toronto’s public art landscape, one that seeks to comfort, cajole, and seduce. This new piece is Shary Boyle’s ceramic sculpture Cracked Wheat, which greets passersby in front of the Gardiner Museum. Boyle has worked in a variety of mediums, including sculpture, performance art, overhead projection, painting, and drawing. Her art is often fanciful and probing, creating creatures and images that are both oddly familiar and remarkably alien. This pairing of the familiar, fanciful, and cosmological in Boyle’s oeuvre disrupts both metaphysical and political boundaries.

In her new piece, Boyle creates a historical palimpsest using a variety of ancient and modern traditions from around the world. In the artist’s statement, Boyle deconstructs the different methods and artistic traditions at work in Cracked Wheat. While the gold cracks serve as an homage to the 16th century Japanese tradition of Kintsugi — the art of repairing broken pottery with lacquer mixed with powdered gold — the Canadian Wheat pattern offers a nod to a mass-produced tableware design popular in 1960s Canada. The polished bronze of the sculpture’s legs refer to the 18th century tradition of ormolu and the flask — the body of the work — was inspired by early Renaissance alchemical drawings.

I had the chance to interview Boyle about Cracked Wheat and her playful, subversive style.

Sarah Ratzlaff: It almost feels like public art is in stark contrast to ceramics because ceramics are so often placed in domestic settings, whereas public art is very exposed. I was wondering how this change of setting influenced your conception of the work and its creation.

Shary Boyle: Because the Gardiner is a ceramics museum, I think they had a requirement that the piece consist of about 80% ceramic cladding. Ceramics are not typically an outdoor material in Canada, particularly because of our extreme climate. Extreme temperatures cause expansion and contraction in the materials, which causes them to crack. So this was an amazing material challenge that the Gardiner proposed to the artists. Materially, I actually reference colloquial tableware in the piece itself, and the history of a Canadian vernacular of affordable tableware.

SR: Did you make that decision because it was going to be a work of public art?

SB: Yes, I did. With public art you really want to consider the institution you are responding to. The Gardiner has a really fantastic international collection of ceramics from all around the world. However, they don’t have any vernacular ceramics, and that would just be how you speak about everyday, common ceramics that you find in the home. Instead, the Gardiner either has objects of great historic significance or great ritualistic significance, really high-end, expensive, exquisite collectable objects, something for a certain class of monarchy. I wanted to talk about ceramics in general in a very local way, in the same way that most people have a day-to-day relationship with them. I wanted to make something approachable…something a little more common. I wanted to give it a humanistic feeling. 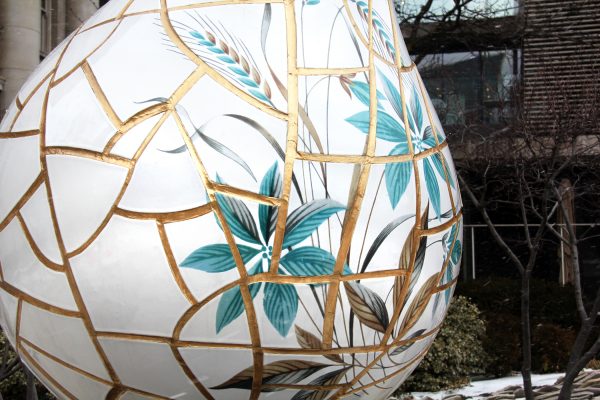 SR: While you have this local aspect to the work, you also take from this huge variety of traditions from all over the world. So in some sense it’s the local and global all interwoven in this one piece.

SB: Yes. I also wanted to use this decal wheat symbol, which was another common decorative tradition in Canada during a certain time. Canada was primarily settled through agriculture, and agriculture and wheat are frequently associated with the Canadiana. But we often forget that wheat is one of the main food sources in the world internationally, so I wanted to also reference wheat as this basic, universal thing. Canada was first settled by Europeans and then people from all over the world, and I wanted to make something inclusive and approachable that many people would associate with Canada.

The crackedness of the piece is also really important to me — the fact that the piece isn’t whole but that it’s been broken. It has a lot of politics in that for me. As an artist I am unable to use a symbol of Canada without referencing the colonial impact and the breakage, and this idea of the nation being deconstructed, our kind of idea and ideals being deconstructed.

SR: I found the shards really interesting as well. You mention the piece itself as being history on legs, because you have so many different layers of traditions in the work. I think you can look at the shards as symbolizing history in one of two ways: one in a positive sense and the other in a negative sense. On the one hand, history is constructed and therefore vulnerable to rupture, and that’s a positive thing because other histories can come to the fore. But you can also look at the breakage as the broken history of people who have been subjugated.

Along that line of thought, I was wondering if you feel that ceramics as a medium has a certain power to express history or historical narratives.

SB: I think so, because it is an organic material that is still connected to minerals and soil, and that is just very obviously symbolic of the earth, right? Ceramic is the first synthetic material that humans ever invented, and with the use of heat it was created in a sort of alchemical way. So ceramics are ancient. It’s one of the very first substances that humans made art and functional ware from, so of course it has a lineage in every culture. 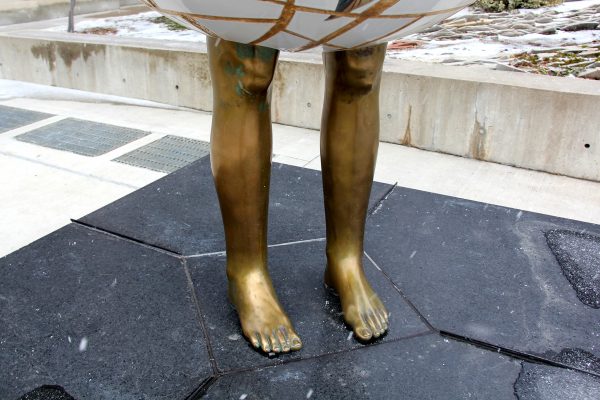 SR: It’s interesting that you mention the alchemical, because in other interviews you’ve also brought up alchemy in relation to ceramics. I think this is an incredibly poignant word because you are in a sense quite literally engaged in alchemy — you take one substance and turn it into something that looks radically different. Could talk about the role the alchemical plays in your work?

SB: There is a reference to certain alchemical drawings in Cracked Wheat in that early alchemical drawings in the Renaissance would often feature images of a flask with arms or legs or a body emerging from it, almost referring to the body as a vessel, as well as transformation. In fact, the person who is credited for cracking the recipe for porcelain in Europe was an alchemist, and also kind of a con artist. So alchemy is always part of the story in my mind, especially when I think of porcelain, which is the first kind of clay I used when I worked in ceramics. I’m of European descent so working with that kind of material is appropriate, because it is the kind of clay and material I was initially interested in and it’s what I encountered in my working class home.

SR: Another striking motif is the act of combining together different species and entities, like in your sculptures Loony Tunes and The Dandy Widow, for example.

SB: There is a bit of that. The zoological thing isn’t that interesting to me specifically, it’s maybe just about not observing proper boundaries. Not being interested in the discretion between two different arenas that people usually consider separate. Whether it is life and death, or childhood and age, or animal and human, or plant and animal, or night and day, or space and earth, or water and land — those are all sort of things that people categorize and make distinct. I just don’t feel that the boundaries between them are that strict for me. There is also kind of a politic in that because ignoring those distinctions is kind of an equalizer. My work has often been described as dark or creepy or grotesque or frightening or unsettling….

SR: But on the other side of that there is a real playfulness in your pieces

SB: Yeah, especially with this piece for the Gardiner I was very interested in making something that was funny and tender and kind of approachable for the completely uninitiated. I feel like the streets are so hard and cold, and Toronto is even known as a city that is not that friendly. Ceramics are also often seen as very stuffy and boring for people — people may not be that interested in exploring what the history of ceramics has to offer. Using humour can really be a way to seduce people into stopping and reconsidering subjects that might be more complicated. If you give people something fierce and hard then people might just avoid it. There are many ways that you can seduce as an artist. Humour is one way, beauty is another, sexuality too. And then you can plant the seed of other deeper ideas through that.

SR: I have a theory that whenever life and death are paired together it is inevitably presented in a way that is playful, like, for example, in magical realism. The topics do not become less horrific or upsetting in this form of presentation, but they are still somehow playful.

SB: I wonder if playful too is just another word for saying celebratory or joyous, because playful is like celebrating life. That’s what children do, right? They are so alive because they are just playing; there is no goal or purpose for what they are doing. They aren’t being productive in society, they are just activated with energy and that playing is for it’s very own sake. When you are thinking about death it makes you aware of the brevity of life and the preciousness of life and the extraordinariness of life, so it doesn’t surprise me that playful humour and electric energy would be associated with death, because it’s just the other side of the coin.

Sarah Ratzlaff is a recent graduate from the University of Toronto with an interest in the philosophy of art and public spaces. Follow her on twitter @ratzlaff_sarah or email her at ratzlaffsarah@gmail.com