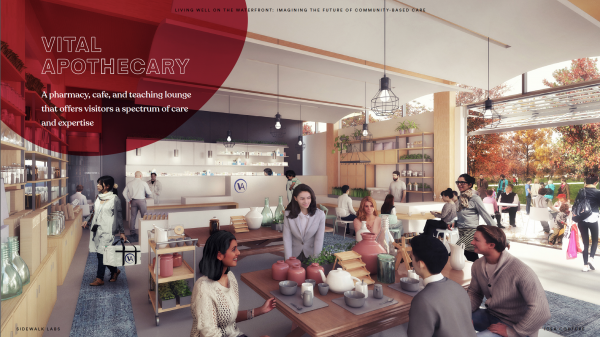 With the new Waterfront Toronto (WT) directors now officially on the job, the re-constituted board should ask itself why Sidewalk Labs — ostensibly a smart city developer focused on the eastern lakefront — is so very interested in health care.

This question has been on my mind since October, 2017, when the Alphabet/Google start-up first unveiled its ambitious proposal for Quayside and, eventually, the Port Lands. The vision included several glancing references to community health centres, an idea that seemed oddly out of place.

Almost two-and-a-half years later, the planning for this barely-covered strand of Sidewalk’s goals has quietly but steadily expanded, despite an almost complete absence of discussion, in the media or in WT’s Digital Strategy Advisory Panel, about how healthcare fits into a tech-oriented plan for developing Toronto’s waterfront and its infrastructure.

Back in January, the company released a 50-page scoping document, entitled “Living Well on the Waterfront,” prepared by Idea Couture, a global design consultancy, and overseen by Sidewalk’s health and human services lead Alexis Wise.

The subject of Sidewalk’s health care plans then made a brief appearance at a March consultation session, looking at the proposed civic data trust that will manage and make available the data generated by Sidewalk’s projects.

As well, Google’s lobbyists (Summa Strategies) have met twice with Ontario health officials since last year’s election. In Ottawa, Siddika Mithani, president of the Public Health Agency of Canada, attended one Ocobter, 2018, meeting (alongside numerous other senior officials) with Sidewalk’s in-house lobbyists. The purpose, according to the registry: “privacy-related matters, specifically the collection, use, and disclosure of personal information by private-sector organizations under the Personal Information Protection and Electronic Documents Act (PIPEDA).”

Let me say, first of all, that anyone who aspires to plan and build an extensive new neighbourhood should definitely be thinking about providing community health services, especially if a portion of the housing is going to be set aside for low-income families, who tend to be least likely to have a family physician. It’s just good planning practice.

Yet if one reads Sidewalk’s Care Collective document carefully, it’s pretty clear that all the locational references to Quayside have little to do with the development plan per se; they could apply to almost any place in the city. Indeed, the language in the report makes little attempt to anchor its proposals in the geography of that part of Toronto:

The dearth of serious public discussion about Sidewalk’s health care thinking is particularly troubling because of the mess that another Alphabet/Google subsidiary caused in the last few years after partnering in 2015 with the U.K.’s National Health Service to deliver a disease monitoring application dubbed “Streams.”

In 2015, a U.K. artificial intelligence start-up called DeepMind signed a deal with the NHS to give health care providers looking after patients suffering from acute kidney disease with a smart phone app that could instantly gather tests, patient records and vital signs in emergencies, and then send alerts if there’s evidence of sudden deterioration. (Patients are presumably wearing devices that wirelessly transmit vital signs.)  “To make all of this possible,” the company says, “Streams integrates different types of data and test results from a range of existing IT systems used by the hospital.”

Sounds good, but the company, which is developing a wide range of AI applications, came under fire following a series of leaks for failing to properly protect private patient information, allegations that led to an audit by the NHS and then a blizzard of knock-on controversy about whether the audit went far enough. The upshot: Google absorbed DeepMind, despite initial promises to firewall patient data so it didn’t end up with…Google.

None of this has been referenced in any of Sidewalk’s documents or presentations, needless to say, although the Care Collective report makes numerous specific references to online patient records (“a consolidated view of each person’s physical, mental, and spiritual being”), sharing agreements, dashboards, wearable devices, and prescription/appointment apps. The back-end, it adds, would anonymize and aggregate community health data to assist with planning and resource allocation.

“Should these ideas be developed,” the document further notes, “a wide variety of questions related to data governance, inclusive design, and coordination with the Ontario Health System would need to be addressed. This will undoubtedly require iterative co-creation with community members and service providers.” The system, it stresses, would work on an “opt-in” basis.

DeepMind, it should be noted, has research centres in Edmonton and Montreal, with links to AI/machine learning experts in both cities, as well as the University of Toronto. Beyond the kidney application, the company’s vision is to use AI and machine learning in other health fields, such as eye diseases. As an academic endeavour, this seems like a worthy goal, but AI algorithms require access to extremely large tranches of data so they can learn how to detect hidden patterns and thus generate the predictions that make this technology so compelling to many sectors, including health care.

For AI researchers, in fact, the existence of large quantities of continuously updated electronic patient records (including test results and imaging), such as those that have gradually come into use in some Ontario hospitals in recent years, represent a very attractive data pool.

How do all these dots connect? Who knows.

Certainly, Sidewalk has offered only the most cursory information about its intentions in this area, and these plans are buried in feel-good representations of health/wellness-oriented community spaces that will likely only ever exist as pleasing architectural renderings.

As we move towards the release later this year of Sidewalk’s proposed master development and innovation plan, it’s tempting to say that Waterfront Toronto officials and the DSAP members very much need to dig in to what’s behind this aspect of the company’s pitch.

But I’m not certain that kind of scrutiny is sufficient. After all, almost all the other aspects of Sidewalk’s plans involve mainly municipal and some provincial matters: architecture, infrastructure, energy, public space, and so on. The health plans, however, fall squarely within provincial and even federal jurisdiction, and it’s not at all obvious to me why a tripartite land development agency should be assessing plans that involve healthcare, patient records, privacy and health resource planning.

The new WT directors are provincial appointees. They should be calling in Ontario’s ministry of health and long-term care before this Trojan horse gets any further inside the gates.