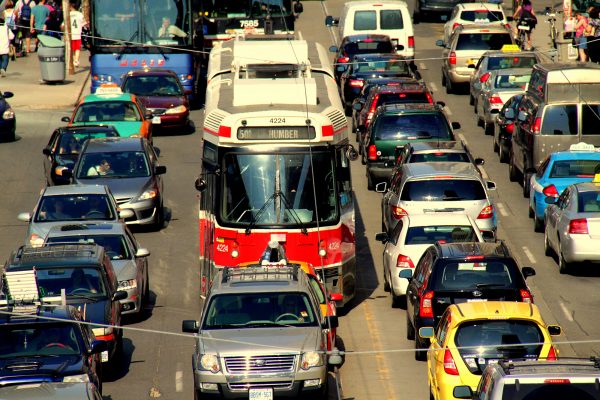 Editor: With congestion grinding cities down and road pricing hitting political buffers, is there a better route to a solution? Spacing is pleased to introduce our newest urban issues correspondent, Nicholas Sanderson. Nick is an independent policy and communications consultant from the UK, currently working out of Toronto, specializing in transport and environment issues. Follow him on Twitter @Nicholas_I_S This is a crosspost from a post he made on his Medium site.

Congestion has been in the news again. The Washington Post presents Arity’s findings, that Americans spend almost three-times more time commuting by car than they get in vacation. More time each year spent travelling to work than they get off. Congestion is a pain. The great inefficiency of automobility.

A partial solution to the congestion problem favoured by economists is road pricing. We have ready-made examples at work in London, Stockholm and Singapore. But road pricing is politically challenging such that the cities that have it are still a minority. Why?

Simply put, it’s a challenge for cities founded on democratic governance. When Ken Livingstone sought to bring one to London, it was billed as his great gamble: a decongested nirvana or international embarrassment and electoral defeat. But even when it was first considered in 2000, over half (52 per cent) of journeys in London were by public transport, walking or cycling. The majority of travelling Londoners were already set to benefit. And Livingstone must have taken confidence from this.

Cities have also held referendums to decide. In Manchester, road-pricing proposals fell foul of plebiscite. While in Stockholm citizens supported a charge. Crucially however, before putting the scheme to a popular vote, Stockholm trialled a congestion charge for six months. Popular opinion changed dramatically and when the referendum arrived, citizens voted in favour. But even reaching a trial can be a challenge.

More recently, in New York and Toronto, proposals were called off by higher political office. Getting a form of rationing through our democratic institutions — particularly fragmented city governance — has proved problematic.

Indeed, one extreme view is that a solution cannot be delivered democratically (at least in America). Speaking to The Economist in 2003, Anthony Downs, author of Stuck in Traffic said, “this is a problem without a solution — at least a solution the American people will accept … Learn to enjoy being stuck in traffic as another leisure activity, because congestion is here to stay.”

Downs’ position is strengthened when we consider that trust in our political institutions has declined. According to polls highlighted by the OECD, trust in government sits at an average 43%. Between 2007 and 2015, trust in political parties decreased by an average two percentage points; while trust in parliaments decreased five percentage points between 2008 and 2014 in OECD/EU countries. Why are these stats an issue?

But with time running out to curb carbon emissions, urban populations rising, and congestion with it, is there a way for democrats (with a small ‘d’) to deliver road pricing?

I would argue there is. And it requires a bit of trust in people. People that members of the public see a bit of themselves in: no ulterior motive, no investments to shore up, no expenses to syphon off, no political career to progress.

The wish list: long-form public deliberation, from a representative group, informed by experts with the right structure to incentivize proper engagement. I don’t claim to have the perfect recipe. But at least we have examples to learn from: the Irish Constitutional Convention, Melbourne’s Peoples Panel, multiple participatory budgeting initiatives at a local level and Scotland’s 2015 Community Empowerment Act, to name a few.

In the transport world, my previous employer Sustrans have a long history of community co-design on street and neighbourhood level schemes. Leaders of the cycling and walking-friendly transformation of one London borough saw it as critical to their success.

There are abundant examples to learn from in order to get it right.

As Claudia Chwalisz argues, “by engaging a broad cross-section of the population — rather than the loudest voices — and giving the time and resources to consider the problem from all angles, public bodies encourage a consensual approach to decision-making and gain the legitimacy to act on hard choices.”

This isn’t an alternative to political leadership, but an accessory to it — giving decisions more transparency and legitimacy. Features sorely needed on such controversial topics as road pricing. Ultimate decision making should, of course, rest with elected representatives. But opening up the development process to the public could help gain the legitimacy needed to act.

Across the world, proposals to deal with the thorny issue of congestion so far have a low success rate. It’s one of the dilemma’s that might just benefit from being one of the issues we put a citizen’s assembly to work on. Long-form deliberation is gaining traction around the world because when it comes to difficult policy-decisions, we’re more likely to trust people like us. And trusting people might be a way to rebuild trust in our political institutions and put forward a workable solution.