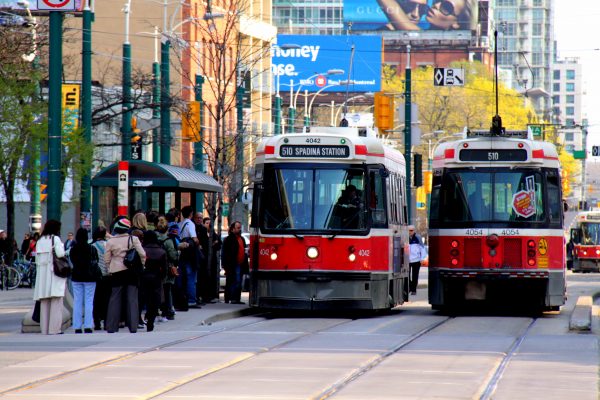 Whether or not you like Ontario Premier Doug Ford’s transit plan for the GTA, none of it is going to help us anytime soon. Its nearly $29 billion in new capital projects, which are mostly underground, some maybe elevated, won’t be realized for at least a decade.

Meantime, we’re stuck dealing with subway overcrowding, transit lines at or over capacity, buses and streetcars jammed in mixed traffic throughout the city. Obviously, this is not a good scenario, for reasons from economy to environment to livability.

To keep our city moving, we need near-term solutions for transit while we wait for Ontario’s megaprojects to materialize. They should be quick to deploy, and relatively inexpensive, given that the City of Toronto’s budget is strained making up the shortfall from recent Provincial cuts and undelivered gas tax revenue earmarked for TTC maintenance. (Not to mention that we don’t yet know how much Toronto will be on the hook to pay for its contribution to Ford’s transit plan.)

At the Ryerson City Building Institute, we believe a big opportunity lies in improving and innovating Toronto’s existing surface transit. Our street-level transit grid has the potential for heavier lifting to move riders all over the city…if we make some serious tweaks.

On July 30, we’re hosting a free morning event “Hacking Surface Transit in Toronto,” to explore feasible options with a panel of experts. To start the conversation, here are some ideas.

It’s not like Toronto hasn’t been working to improve its surface transit routes: the St. Clair streetcar right-of-way and the recent King Street Transit Pilot are great examples of innovating existing streetcar routes to ease congestion and boost ridership. The St. Clair project cost a total of $106 million and significantly reduced travel times and boosted ridership, but suffered from scope creep which increased costs and completion times – providing lessons for future application.

The super-quick King Pilot project transformed a segment of a busy downtown streetcar route into a reliable corridor freed from mixed traffic, an absolute bargain of a hack at an estimated $1.2 million/km compared to the $500 to $800 million/km cost to build underground transit.

Is there the option to extend King Street’s transit priority along the entirety of its route, which carries over 80,000 riders per day – two thirds more people than the Sheppard subway?

Concerns raised over such a proposal question whether the parallel network of streets beyond Bathurst and Jarvis can absorb east-west vehicle volumes redirected from King. But if we can’t get people comfortably out of cars and onto frequent and reliable transit (not to mention bicycles), we’ll lock people into car dependency – notably condo dwellers along densely developed King and in Liberty Village – and exacerbate our transportation problems.

With Toronto’s downtown residential population expected to double in the coming decades, and currently experiencing the region’s greatest employment growth, the time is now to get serious about mode shift in North America’s fourth largest metropolis.

A broader proposal: could we scale the King Street model across the city, hacking other busy Toronto streetcar routes into rapid transit?

Since Toronto’s budget is likely not in a position to fund LRT routes, we might look to Bus Rapid Transit (BRT). Many of the city’s suburban bus lines and previous Transit City proposed LRTs are on arterials (for example, Jane Street and Malvern Avenue) that are suitable for mid-lane BRTs.

There is a long list of busway advantages and benefits. BRTs are at least 50% less costly than LRTs to create, and take half the time to build. They can be efficiently converted into LRTs by adding rail infrastructure, if capacity so dictates. They contribute positively to the revitalization of neighbourhoods through raising the potential for transit-oriented development and affordable housing, and in the case of certain routes, provide rapid transit to underserved priority neighbourhoods.

Now that the TTC is trialing a new electric fleet, we have an opportunity for emissions-free BRT. EV technology is growing in leaps and bounds; while today’s electric buses can act as mobile storage batteries charged overnight with surplus baseload electricity, future tech will reduce dependence on the grid altogether with self-powered solar vehicles.

Obviously, nothing comes for free. So how do we pay for these innovations? Toronto’s budget is already overstretched; new sources of revenue are required. Toronto, Metrolinx and the Province have studied and debated revenue tools for transit investment for a decade with no progress (save for John Tory’s proposed road tolls proposal, shot down by the Province in an election year).

Personally, I advocate for the “pay what you burn, not what you earn” climate-oriented taxation approach – for instance, reinstating the vehicle registration tax that was cut by Rob Ford but is permissible under the City of Toronto Act – and there are other innovative mechanisms outside the go-to revenue toolbox to consider.

Ride-hailing and private transportation services like Lyft and Uber have added close to 70,000 ride-hailing vehicles to Toronto’s roads, contributing to congestion, wear and tear on our infrastructure, and pollution. A new report by the Ryerson Urban Analytics Institute demonstrates vehicle-for-hire activity has resulted in outcomes not in line with many of the City’s planning goals, and are responsible for a significant increase in congestion.

Toronto residents bear the brunt of costs incurred by transportation-related companies, who use our streets and public realm as their marketplace. Amazon and other online retailers are also clogging roads with deliveries, and overwhelming municipal waste streams with packaging – environmental and economic externalities paid for by the city and taxpayer.

Other cities are starting to levy congestion charges onto the growing problem of online deliveries. Toronto should consider these advances as well as a “city levy” on companies for each ride in a single-passenger hired vehicle. (It could be argued taxis already pay for their licenses.) These charges could be put towards more transit and cycling infrastructure, and disrupt the perverse feedback loop in which more people opt for ride hailing as streetcars and buses are ensnarled in mixed traffic.

Another discussion on the table is capturing value from development, proposed by Sidewalk Labs to partially finance the Waterfront LRT (which was omitted from Ford’s transit plan), and is reminiscent of what Mayor John Tory proposed for Smartrack.

We’ll probe these questions and many more ideas in “Hacking Surface Transit in Toronto”, on July 30, part of our Urban Innovation Café series. Be sure to register for this free event and join us.