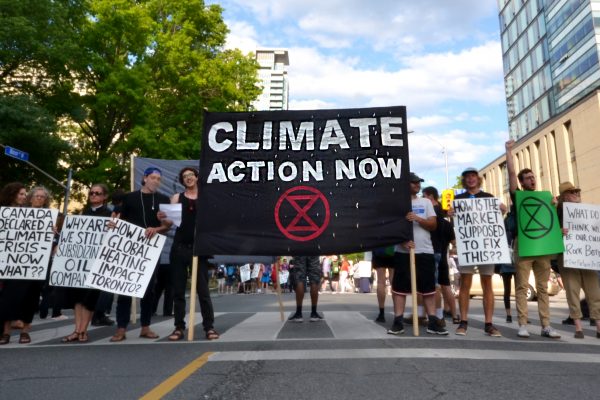 “Unanimously” is the operative word in the previous sentence: the politicians who voted “yes” spanned the ideological spectrum, from neo-cons like Stephen Holyday and Michael Ford on the right, to eco-activist NDPers, like Layton and Gord Perks, on the left. The consensus extended from downtowners to suburbanites, from councillors who represent primarily affluent and mostly white neighbourhoods to those whose constituents tend to be low-income or racialized.

In short, they managed to set aside partisan, socio-economic, and geographic differences to make common cause about a key issue — a rare good news story! I’d say there’s a critical learning for all of us — including pols from other parts of Canada, and those at the federal level in particular — in that rare gesture.

The potential for such a move federally has, in fact, been bruited quietly during this election, in case you missed it. One of the Green Party’s platform planks is the establishment of an all-party cabinet committee with a mandate to address climate change. Leader Elizabeth May asked Prime Minister Justin Trudeau whether he endorsed the idea during the English leaders’ debate but he blew her off.

Over the past few days, however, NDP leader Jagmeet Singh has been touting a more general version of this construct: a coalition government in the event of a minority Liberal win, with cabinet members drawn from the NDP and the Greens. Singh has also stated he’d exclude the Conservatives and presumably the Bloc Quebecois. The Liberals, somewhat surprisingly, have not ruled out this scenario.

Here’s a question, then: does a hung and unstable parliament representing a polarized electorate offer up an opportunity for all five parties to truly do politics differently, and to embrace May’s power-sharing idea (let’s call it for what it is)?

It seems to me she’s challenging Canadians and the other parties to consider the possibility that our traditionally adversarial parliamentary system could evolve into a hybrid that contains elements of both the classic Westminster model as well as the more consensus-driven one that exists in every municipal council in Canada.

But are the federal parties capable of devising a process for carving out those parts of the country’s business that pertain to climate change, and then deal with them the way municipal councils operate, which is to say in the round, and without the division and discipline of party politics? Could they do politics-as-usual in one policy realm but practice a different sort in another?

May’s idea, of course, is highly utopian, but the challenge of confronting climate change clearly demands a new form of politics, as many people have noted.

Let’s look at the political geography of Canada for a moment: federally, the parties all agree that climate change exists and is a problem that we must tackle — somehow. Yes, the parties’ various solutions ran the gamut in terms of effectiveness. Still, given the proliferation of active climate deniers on the American right, this single fact feels like a bit of a victory, or at least a decent place to begin.

The second point is to note, in passing, the Liberals’ broken promise to reform Canada’s federal election process. I was always skeptical about this pledge, and it seems to me there’s not necessarily a crisp connection between electoral reform and more responsive government. Maybe what’s necessary now, in our representative democracy, is for elected officials and the federal government to find better ways of making decisions within the existing electoral framework.

Third, there’s no doubt in my mind that if Canada is to adopt a sustainable climate strategy at the federal level, it must be seen as legitimate right across the country. That social license, for good or ill, currently does not exist.

Canada has no choice but to transition to cleaner forms of energy, which means Ottawa must address itself fully to the special cases of Alberta, Saskatchewan and parts of Atlantic Canada. After all, for a national climate plan to be politically and socially sustainable, and to deliver real gains in terms of emissions, it must confront the economic anxieties of the millions of Canadians who live in those regions and depend, directly or indirectly, on fossil fuels for their livelihoods.

Needless to say, the advantage of a cross-party decision-making mechanism is that it offers an opportunity to bridge regional divides and engage those whose lives and livelihoods stand to be most impacted by climate mitigation policies. There’s no guarantee of success or agreement, obviously, but status-quo decision-making doesn’t seem to be functioning all that well, either.

All of this looks like really hard political work. Indeed, it’s impossible to imagine a scenario where a multi-party cabinet committee established in the wake of the October 21 election would get anywhere but stuck.

Yet the history of diplomacy and geopolitics offers clues about what’s possible between adversaries. Begin with small policy wins that all parties can agree to, and build slowly from there. The parties must agree to let this thing do its work without political interference, especially from the prime minister’s office. And the MPs tasked with overseeing such a cabinet committee need to forge a consensus about how they should communicate such reforms to Canadians. In fact, the comms piece may be the toughest problem to crack. After all, it requires politicians who compete for power to carve out a space where they negotiate consensual solutions and leave aside the point-scoring.

Far fetched? Probably, but consider the fact that Canadians generally have demonstrated an interesting capacity to allow controversial policy choices to stand once they’ve been debated or addressed by the courts. Free trade, the GST, pension reform, abortion, the death penalty, LGBTQ rights — these are all generally settled matters that survive, mostly in tact, despite changes in government.

On the environment in particular, the federal auditor general’s office includes the Commissioner of the Environment and Sustainable Development. This is oversight body that traces its origins back to Brian Mulroney and his Tory government’s response to the 1987 Bruntland Report (Our Common Future) and was formally established by Jean Chrétien’s Liberals in 1995.

The Commission is an auditor-general-like watchdog that monitors and evaluates the government’s environmental record, and then reports its findings to Parliament, not the party in power. It doesn’t create policy. But the Commission’s survival over 24 years offers a clue about how to insulate environmental issues from the shifting sands of partisan politics.

In other words, while a multi-party cabinet committee with a defined mission seems like a long shot right now, there are well-established aspects of federal political culture that reveal at least a glimmer of hope for success.

But to deliver results, such a solution would require that both the Liberals and Conservatives set aside their abundant arrogance and combativeness for at least some of the time and experiment with a new way of making decisions on behalf of Canadians.

The party bosses would also do well to reflect closely on the structural governance conditions that allowed the likes of Stephen Holyday and Gord Perks to agree on a substantive policy matter. Politics, as the saying goes, is the art of the possible. In the midst of this miserable election campaign, Elizabeth May has offered us all an opportunity to revisit the deep wisdom of an old adage.