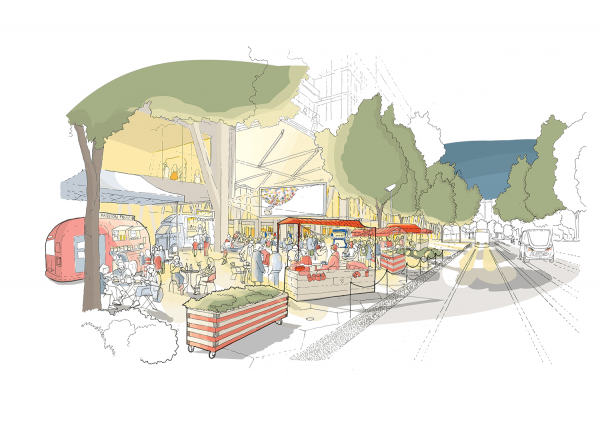 From the moment last June when Waterfront Toronto chair Steve Diamond upstaged the much-hyped launch of Sidewalk Toronto’s Master Innovation and Development Plan with an unmistakably icy power move, there was no doubt the agency’s near-term goal was to re-assert control over a chaotic process that had inflicted enormous reputational damage on a once respected public institution.

At the time, Diamond informed Dan Doctoroff & Co. that they would have until Halloween to walk back the elements of the MIDP that could be filed under, “giving away the store.” So yesterday’s board meeting, the results of which had been dutifully leaked earlier in the week, was mostly an exercise in knocking tin cans – the so-called “threshold issues” – off a brick wall.

The LRT as a pre-condition for a deal. Gone.

To his credit, Diamond, a highly regarded planning lawyer-turned-developer, declined to crow about the outcome of the negotiations. But there’s no question that Sidewalk Labs, and by extension Alphabet/Google, blinked first in this stare down. And they did so because SWL by this point had far more to lose than Toronto did, as Diamond clearly recognized. Two years into a globally-scrutinized, brand-shredding exercise that will surely become a business school case study in how not to endear yourself to a host city, Sidewalk had to accede to WT’s terms because, well, it had no other option.

The bulk of the board’s decision, in other words, focused on what won’t be happening, at least not any time soon. The terms of the agreement make it clear that the public sector, not Sidewalk, will determine the approvals timetable, the legislative and regulatory framework, and the procurement process. The actual development proposal for the 12-acre Quayside site has yet to be approved – Sidewalk must flesh out its plan and submit it for approval to WT’s board by next March, at which point the agency will provide a thumb’s up or a thumb’s down.

For a New York-Silicon Valley hybrid that landed here two years ago with an abundance of swagger and cash, the climb down is a thing to behold, and no doubt, for Sidewalk, an object lesson about the mosh-pit that is true public engagement.

While the media coverage about this latest juncture in the Sidewalk melodrama has focused, appropriately enough, on the re-scaling of the firm’s ambitions, it’s also worth noting what Toronto got (or will get) from this showdown.

One big gain: the creation of a public agency that will house data gathered in Quayside and, presumably, in other smart city neighbourhoods of the future. Rejecting a highly problematic scheme pitched by the Toronto Region Board of Trade to graft this critical responsibility onto the Toronto Public Library, the board’s recommendation marks the first step towards establishing an institution dedicated to ethically administering all the raw data culled from urban environments.

A second has to do with the proposed evaluation process for smart city systems. “Digital proposals,” according to the document released yesterday that laid out the terms of the new understanding, “may be required to go through a public meeting process and approvals by government.”

During the press conference following the board meeting and in a follow-up interview, Diamond elaborated, saying that developers (Sidewalk or anyone else) who want to include new digital technologies in their projects should have to submit their plans to an open process that involves public consultations and assessments by city staff, as is the case with any development application. “I think it makes it democratically accountable,” he said.

In other words, smart city technologies will need to pass muster with the public, and not just bureaucrats or privacy watchdogs, if they are to become part of this city’s urban fabric.

From where I sit, this detail, which didn’t get much airplay, represents a potentially giant legacy of the showdown of the past two years.

Once you peel away the jazzy built form ideas and Sidewalk’s various technology schemes, the question of appropriate governance has hung heavily over the company’s plan from day one, and in fact constitutes the core of many of the critics’ objections.

Neither SWL nor WT expected a governance debate back in October, 2017, but a debate is what they got. Among the take-aways was that governance can’t be an after-thought or something to be outsourced. Governance, rather, is all about securing the social license to operate

In my view, the wisdom of institutionalizing a governance framework that formalizes public engagement as well as technical or regulatory scrutiny can not be overstated. The corporate proponents of these powerful technologies must be able to persuade the public that they are indeed necessary, come with suitable safeguards, satisfy regulatory requirements, offer value for money and, ultimately, improve city life. Moreover, the onus is on the developers of these systems to explain their technologies and publicly justify their deployment. Finally, both vendors and municipal officials need to hear from members of the public about what’s acceptable and what’s not. The information has to flow in both directions.

It is not yet clear whether existing municipal approvals bylaws or provincial planning laws provide for this kind of scrutiny. Downtown councillor Joe Cressy, the mayor’s designate on the WT board, says council in January will be receiving a staff report on smart city governance that will put meat on the bones of these principles. Diamond, for his part, says WT will assess whether the various planning bylaws and statutes allow for such consultation processes; if they don’t, Diamond says WT will recommend that the Ontario government amend its planning laws accordingly.

I’d also argue that the fact of public and regulatory scrutiny is necessary but not sufficient. Sidewalk is hardly the only smart city firm looking for municipal customers to either trial or deploy emerging technologies. If our planning approvals framework evolves to include the routine vetting of these complex systems, we should also remember that evaluation processes and policies should also consider whether urban problems might also be solved in ways that don’t necessarily involve new technologies. To riff on the old chestnut, if your only tool is a sensor, then every problem will look like a data set.

The key point, however, is that the public consultation processes envisioned by the WT deal shouldn’t merely be about going through the motions, which is what Sidewalk did with its consultations. Rather, good governance of smart city technologies will depend on critically engaging ordinary residents who, after all, represent both the users and ostensible beneficiaries of these systems.

As we’ve seen, the discussions may be uncomfortable. But the outcomes will be better.