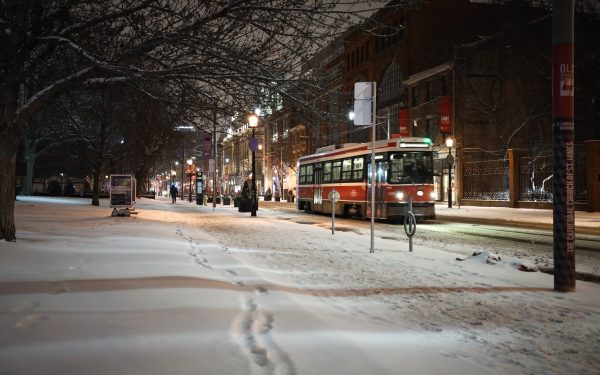 Increasingly, as the TTC finds itself in a public relations nightmare, I have found myself wondering why an agency that is so instrumental in the city’s daily life has become an implacable bureaucracy without a face or, more importantly, a voice.

I’m not talking about the scolding and ubiquitous ad campaign that seeks to discourage people from copping free rides. Nor am I referring to the perfunctory stand-ups that Rick Leary, the TTC’s chief executive officer, does for CP24 or Global when a subway car derails, as happened for the second time in a month last week.

Rather, I am thinking back to Andy Byford’s stint in that job, and the way he — in collaboration with then senior communications officer Brad Ross, who has since moved to the City of Toronto — went out of their way to actively engage with the millions of people who depend on the TTC every day.

From almost the moment he took over from Gary Webster, a career TTC manager ousted by Rob Ford, Byford made himself the persona of this sprawling organization. He told us that we should expect decent service and civil treatment from TTC staff. He ordered TTC personnel to act like they are dealing with customers. And Byford didn’t hide away on the eighth floor of the TTC’s headquarters at Yonge and Davisville. He rode the subways and became a presence in the city. It made a difference.

His decision to position himself as the person at whose desk the buck stops signaled his staff and transit users – both those who have no choice as well as those who do – that accountability matters, and that it’s not just institutional or structural. Accountability is about people, and the people in charge in particular.

Leary doesn’t do public facing leadership, and in fact denies that this task is part of the job description. “I don’t have to be visible,” he told Global’s Farah Nasser when she challenged him to explain where he was during the first derailment, in late January. (He said he was at TTC HQ directing the deployment of shuttle buses.)

The TTC’s other spokesperson, chair Jaye Robinson, has also been away from the limelight, understandably, due to health reasons. So it’s fallen to the mayor to apologize for the massive disruptions that have blown a gaping hole in whatever claim to credibility the aggressive anti-fare evasion campaign may have had. The agency hasn’t even bothered offering those thousands of twice-stranded commuters so much as a free ride to compensate them for their inconvenience.

A brief aside here about recent TTC history and this matter of executive style.

In the early 1990s, the TTC chief general manager was Al Leach, a Tory good ol’ boy more interested in ingratiating himself with the powerbrokers at Metro than running the system properly. The mounting neglect and repair backlog culminated in the deadly 1995 Russell Hill subway collision. Leach, by then, had decamped for electoral politics, managing to get himself named to the Mike Harris cabinet, where he was appointed, ironically enough, as municipal affairs and housing minister.

Leach’s successor, David Gunn, a lanky Maritimer with extensive experience running railways and subways i the United States, brought a completely different style to the job. He was visible, plain-spoken, media-savvy and made a point of publicly articulating what the TTC needed at that moment: a clear political consensus that state-of-good-repair outlays took precedence over everything else (an outlook that has endured) and the critical importance of an extensive bus rehab program.

Gunn excelled at selling these budgetary priorities, to council and in the media, but he clashed with his political overlord, then TTC chair Howard Moscoe, who didn’t care for being upstaged.

Through the 2000s, the top jobs were held by home-grown transit veterans – a GO alumnus named Rick Ducharme and then a low-profile TTC engineer, Gary Webster, who took over after run-ins between Ducharme and Moscoe over labour relations (Moscoe actively meddled in contract negotiations). Through his henchmen on the TTC board, Ford orchestrated Webster’s firing for the apparently unpardonable sin of favouring LRTs over subways.

In my experience, some civil servants like the limelight and others hate it. Byford — who left to run the MTA in New York a few years ago but recently quit — fell into the former camp, and with good reason. He had an excellent feel for the city’s political geography, spoke about customer service in a way that appeased the brothers Ford, and actually managed to improve the way the TTC treated riders.

Setting aside the dubious circumstances of his elevation to the corner office, Byford and his executive team, in my view, permanently re-wrote the rulebook about the agency’s public and customer relations functions. Quite simply, the visible, high touch CEO has become table stakes, which means the cloistered operations-guy MO doesn’t cut it. The TTC’s CEO must be out there, explaining the system, accounting for its failures, encouraging his employees and showing what responsive leadership looks like.

At a time when the internet is awash with cell phone videos of transit cops beating up riders and terrifying images of platforms jammed to the yellow warning tape, the TTC’s boss needs to find a way to be constantly out there and listening to the riding public. Let his senior vps figure out the shuttle buses.

What’s more, the case for a more accessible CEO became that much stronger late last week, and not just because of the latest derailment. The City and the province finally released the results of the negotiations about future transit projects. While the agreement spells out important operational details, like billions in future spending on SOGR, there are still worrisome ambiguities, such as whether the Ontario Line will in fact be operational before the opening of the Yonge North subway expansion up to Richmond Hill.

Leary, among others, will need to be very clear-eyed and very public about the disastrous implications of the Yonge extension coming on stream before riders have a viable alternative to the Yonge-Bloor interchange. Yet the partnership agreement and recent city documents are far less specific about the timing of the $500 million “Bloor-Yonge Capacity Enhancement” project than they are about the proposed network expansion plans that will directly affect that choke point.

What’s more, the agreement is problematically silent on the future of the Queen’s Quay East transit corridor, which remains mired in internal technical debates about how it should connect to the streetcar loop under Union Station.

Again, Leary has got to be relentlessly outspoken about advocating for the whole system. I don’t care if this isn’t his thing. The visibility, and the critical importance of meaningfully communicating with the people paying the fare, comes with the paycheque. TV news stand-ups on those days when things have literally gone off the rails is just not sufficient. The TTC’s CEO is a public figure. He needs to act like one.