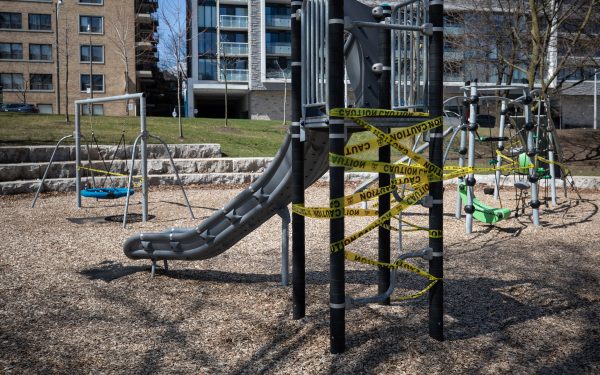 Many cities around the world have started to open up road space for non-automotive movement to give people room to get some exercise safely. As Toronto leaders continue to resist such initiatives and instead police even sitting on benches, some urbanists are chafing at the restrictions on their mobility.

They are asking: whose city is this?

I think there are valuable things to learn about cities from the new restrictions on mobility. Some of the best teachers are disabled, racialized, homeless and queer. They have been wrestling with these challenges for as long as they can remember. They can offer lessons for everyone about where to look and how to think about mobility, privilege and justice in the city.

Mobility is everything in the city. An urban way of life relies on movement. So many people and goods need to move in order for daily needs to be met.

Rural residents tend to be broadly skilled and can care for their households if a crisis cuts them off from others. Have you ever heard urbanites being cursed as useless? It’s true. In the city, we are not nearly as self-sufficient. We don’t grow things or fix things. We are reliant on others for everything: the provision of energy, food, clothing, basic services. Some urbanites sew, or grow food, or make furniture, but they are not the norm, nor is their work the foundation for the economy.

In the city, we need to move to get what we need and bring it to others. It is a collective enterprise, where people play different, often specialized, roles. The more freedom of movement you have, the more privilege and advantage you have. Freedom of movement includes speed, physical and social accessibility, safe modes of travel, and safety in place.

Many people are frustrated with the restrictions on their movement and John Tory’s unwillingness to open up more road space, which is currently hosting less than half the traffic it did in February. (Remember February?) They feel disadvantaged, and rightly so, by the lack of accommodation to safely move in the city.

But of course this is what it’s like for many communities all the time. The people possibly struggling the most with the lockdown are those who are used to unlimited access to the city, like it’s an extension of their backyard.

The city is not your backyard. Not even the parks. (Leash your dog.)

I get the frustration, but I want to change the frame of the discussion. When we think about and plan for mobility, we need to do so from the understanding that the city is a collective, interdependent space.

Disabled, racialized, homeless, and queer citizens have been wrestling with these challenges for as long as they can remember. They have lessons for everyone about where to look and how to think about mobility, privilege, and justice in the city. They are the people struggling the most with the lockdown.

Disabled activists have been screaming for years about mobility and access in the city: public transit that is inaccessible, the educational institutions, the shops, housing, often inaccessible. About the employers who “don’t think they can accommodate telecommuting” (who now, suddenly, can). They know what it means to be cut off from the places they need to be.

Black activists have been calling attention for even more years about the policing of their ordinary movement in the city. Their fear of violence from police officers and from fellow citizens who don’t want Black people to be where they are, even if where they are is their own neighbourhood, their own home.

Queer people can similarly draw a map of safe and unsafe streets to be — and similarly, a police presence can signal a lack of safety as often as the opposite. They know that just being who you are, dressing how you want, or holding hands with whomever you choose can be enough to get you harassed, arrested, or even beaten up.

And, finally, the homeless can teach everyone else a lot about who has the right to be and to go where, and how much it can depend on one’s access to clean clothes and clean water. They know how having money and access to safe spaces is a matter of life and death in the city.

It’s not a coincidence that many of the above communities overlap and intersect. The majority of people with disabilities are racialized. Indigenous and Black youth are over-represented among the homeless.

The discussion about opening streets is about a lot more than stretching your legs. It’s about who governs this city, and who the city belongs to. We need to make public space safe and truly public. Open to all.

The above communities and activists have exhaustively documented the ways in which their well-being and sense of belonging are diminished and damaged by the structural and social restrictions on their mobility. When less of the city is available to them, when their movement through it is slower or even thwarted entirely, they are actively disadvantaged. Their vulnerability to violence and deprivation is increased. It is a direct relationship.

Our goal right now should be to maintain and improve mobility for as many people as possible while still maximizing public health safety. This is possible. But it requires vision.

Instead, the City has opened up a few short stretches of road space beside the curb so that people can wait safely in line to buy groceries. It almost feels like economic activity is the only legitimate reason for having access to the space you need.

In the same announcement, the City also opened a few more spaces for parking near key shops. Again, spending money will get you space in this city. But exercising or sitting by yourself in a park? Not so much. At the heart of this discussion is a hierarchy of the conditions and identities under which you are entitled to be and move in public.

This isn’t new. The pandemic has just made mobility restrictions apply to everyone, including those who are not used to their movement being compromised by anything or anyone. The hierarchy has been flattened a bit, but the wealthy, homeowners, drivers, white people still come out on top.

What an impoverished idea of public life. That limited thinking is part of what led City leaders to be utterly unprepared for the public celebration of the Raptors’ championship celebration. They certainly did not expect the volume of people who showed up. I was struck at the time by how poorly some understood who actually constituted the city. They are similarly unprepared for the desire of people to have safe access to public space and public life during a pandemic.

I want to live in a city that encourages and makes space for that life and energy — not just downtown, but everywhere. A city of beautiful, interesting and safe spaces that people want to be in and move through. The closure of High Park during the blooming of the cherry trees is so sad precisely because we have an inadequate number and distribution of such places.

I support those who want to redistribute space from automobiles to walkers, rollers and cyclists. I also want us to cultivate an understanding of urban space that is about more than a big backyard. To think about who has privileged access to public space and whether everyone has the right to the city. Public transit service, policing, and food delivery are just as important as road space for walking.

I always want the bigger conversation, the better thinking. The city is not an extension of your personal space, but something much richer: a collective space on connective tissue, in and through which everyone shares the wealth of the city.