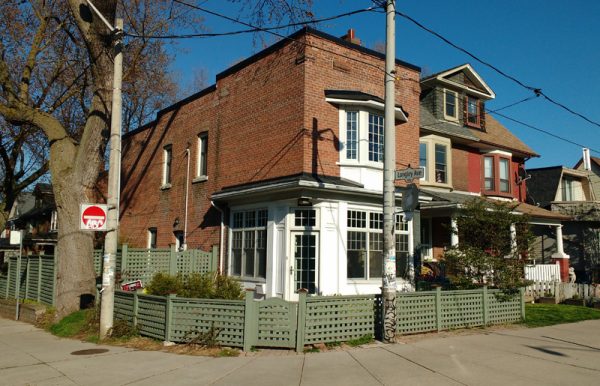 Like so many people during the current pandemic lockdown, I’ve started to get to know my neighbourhood much more closely on daily walks for exercise from my home. One of the elements of Toronto’s everyday vernacular architecture I’ve always found interesting is the former corner shops embedded within residential neighbourhoods in the older parts of Toronto. Once upon a time these were the first stop for regular goods and sometimes services, not to mention local news and gossip, for nearby residents who could walk to them daily. But with the advent of widespread car ownership and supermarkets, many of them declined and were converted to become purely housing.

The need to address climate change and congestion, and more recently the sudden reorientation towards working from and shopping near home caused by the COVID-19 pandemic, have stimulated talk about reorienting our lives more closely around the neighbourhood we live in. Even before the pandemic, Paris mayor Anne Hidalgo had begun talking about the “15-minute city” where we can live, work, play, study, and shop all within a 15-minute walk. With the added experience of the pandemic forcing us to stick to our neighbourhoods, the idea of having more of our shopping, services, and workplaces near where we live has become all the more front-of-mind.

Current zoning, however, prohibits any use other than residential on streets within residential neighbourhoods, pushing all retail, service, and office uses to main streets. Corner stores that have maintained commercial use all along are grandfathered, but I’m told that once they are converted to residential use, they can’t go back. And, as we will see below, there are a fair number of these former commercial properties hidden within neighbourhoods in the older parts of the city.

Maybe one small nudge towards Toronto as a “15-minute city” could be to designate all of these former corner shops inside neighbourhoods as automatically, as-of-right, eligible to be reconverted to commercial uses. They probably would not become corner shops again — those still wouldn’t be viable in most cases. But they could be any other kind of commercial use too, whether retail, services, or offices – a barbershop, a lawyer’s office, a coffee shop or specialty store (or a coffee shop and specialty store), a co-working space, maybe even a startup. They also have the advantage of potentially being convenient live-work spaces, with living space on the upper floor; alternatively, the upper floor could supply a much-needed residential rental unit. It’s a change that would be relatively subtle, since it would only affect a tiny fraction of the buildings in a neighbourhood.

Ideally most employees and customers would be local and be able to walk or bike to these locations. But these buildings are generally also not far from transit. Once the pandemic ends, if driving is necessary, there will usually be parking spaces available on nearby streets during the day when some locals drive to their own work. Meanwhile, keeping people in or bringing people to the neighbourhood would provide additional business for local shops and restaurants, and bring additional “eyes on the street” to the area during the day.

Any reconversions would be a slow process, especially given how desirable housing is in the older parts of the city, so this would just be a very small step. But it might give a little nudge towards better integrating mixed uses into some older neighbourhoods without too much disruption.

In the meantime, my local walks have given me the opportunity to look for and observe these former corner stores more closely. Here are some of the indicators I’ve noticed for spotting former corner stores in residential areas. I’ve stuck to those inside neighbourhoods rather than ones on minor arterials like Pape Avenue, where they are less unexpected. These examples are all within a few kilometres radius of where I live, off the Danforth.

A few corner commercial buildings are still in use, of course. Some are still corner shops. 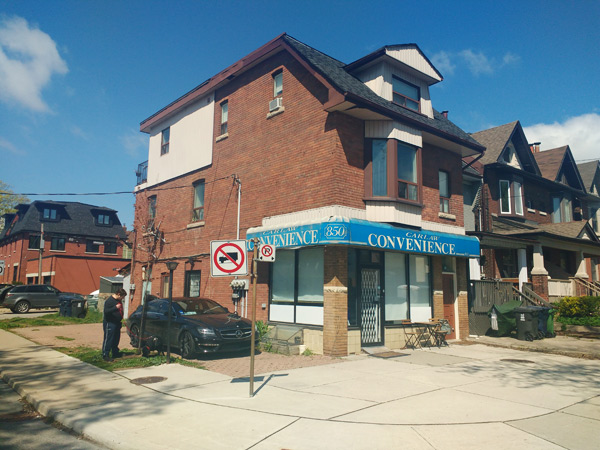 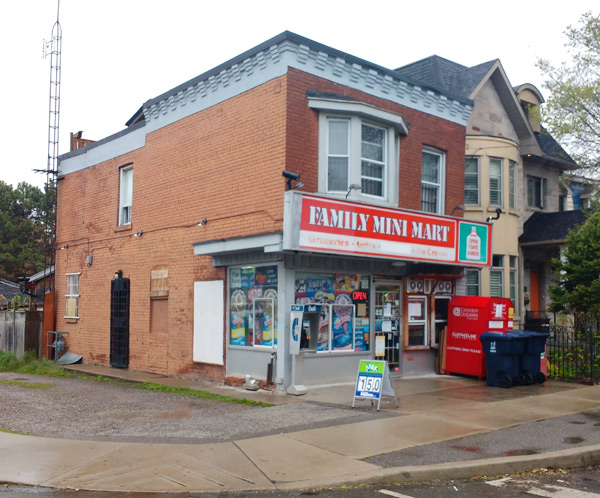 Others have innovative new uses, such as cafes, or even little offices. 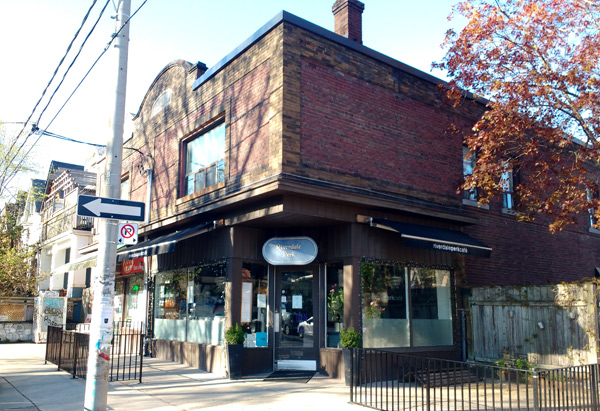 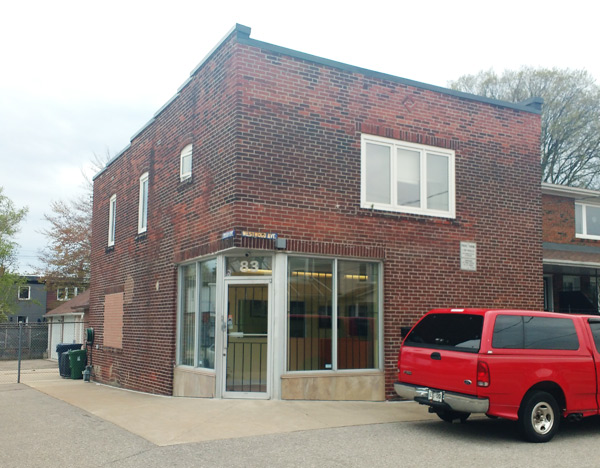 But there are many more that have been converted to residential over the years. Some have not changed much yet; others have long been absorbed into residential use and their former commercial identity is quite disguised.

One of the dead giveaways of a former corner store is the angled corner door. 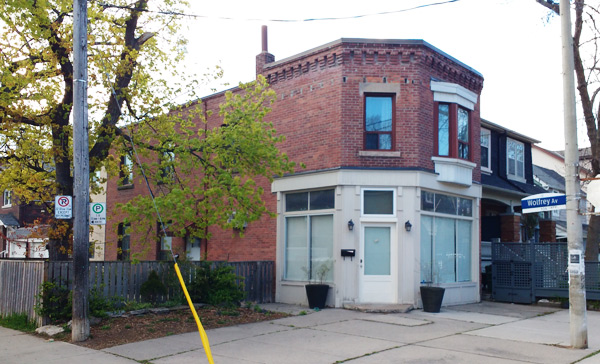 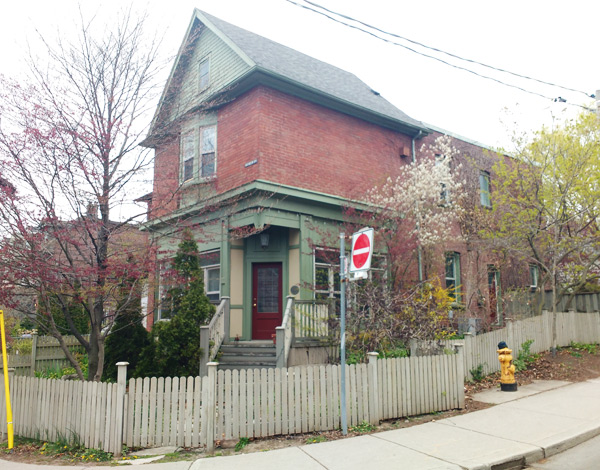 In some cases, these have even been covered over, but an angled wall on a corner building is a sign of a former store. 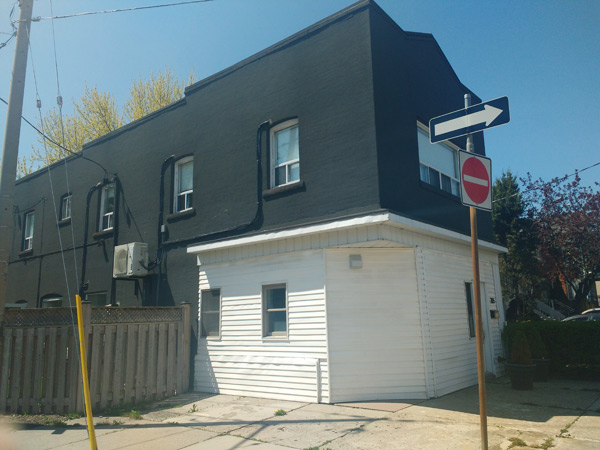 I found one case where you can still spot the former step up to the door. 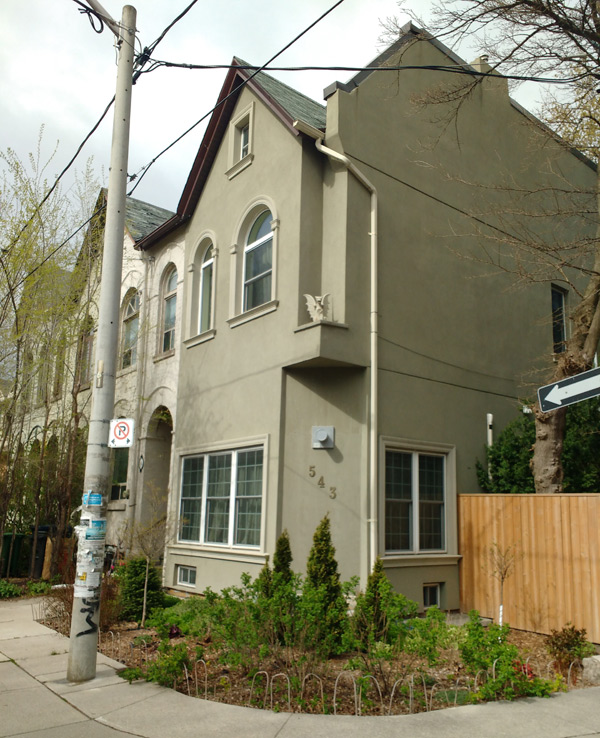 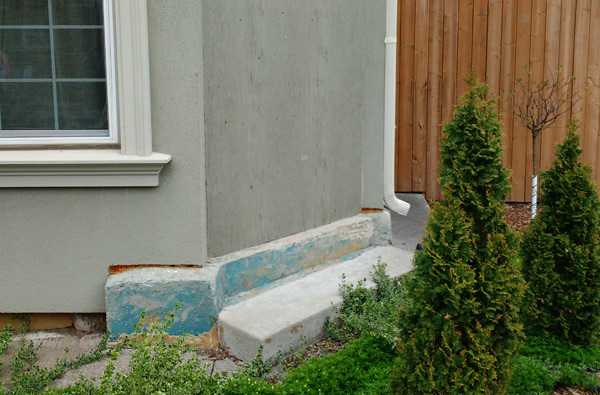 An alternative indication is a recessed door. 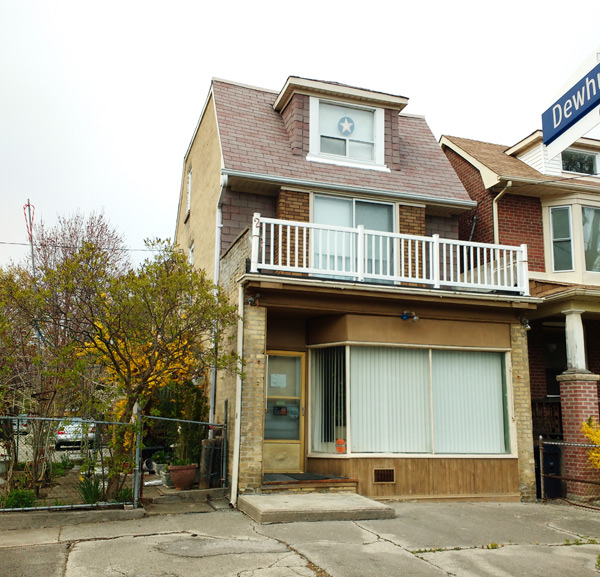 The full-width single ground-floor window, once used for displaying goods and giving a view into what the store has to offer, is also a sign.

A paved-over front yard is also a clue that a building was once used for commerce. 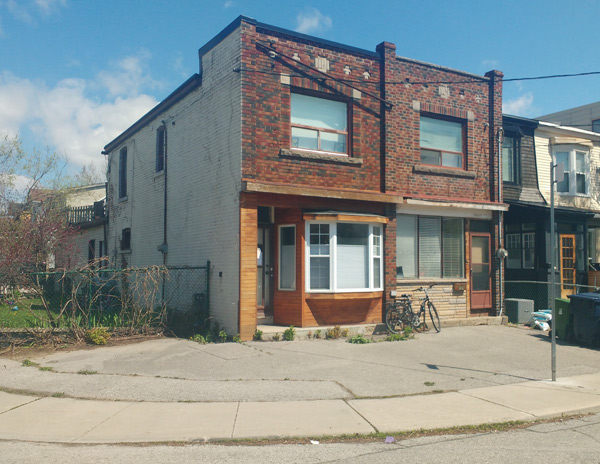 Sometimes, corner retail shops were somewhat disguised, looking like a regular house on the upper stories but with commercial elements on the ground. But, often, former corner retail shops are simpler and boxier in their build than the regular houses on the street. They have flat roofs that stand out from the peaked roofs of their residential neighbours, and doors flush to the ground with no front porch. 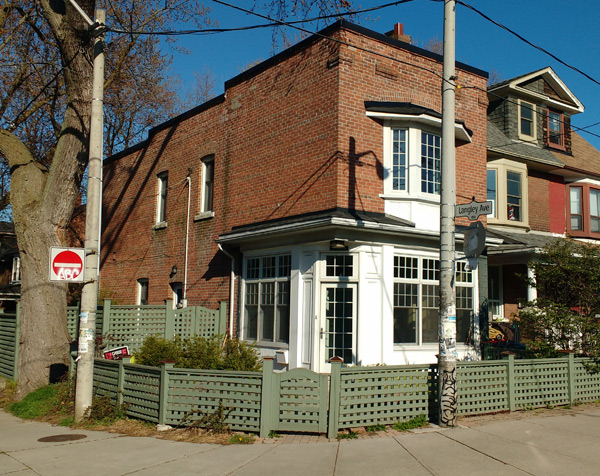 Corner commercial buildings are usually detached, but sometimes they’re part of a semi-detached pairing. In those cases, they often sport the same ornamentation as their attached twin, but the ground floor of the corner building has some commercial features. 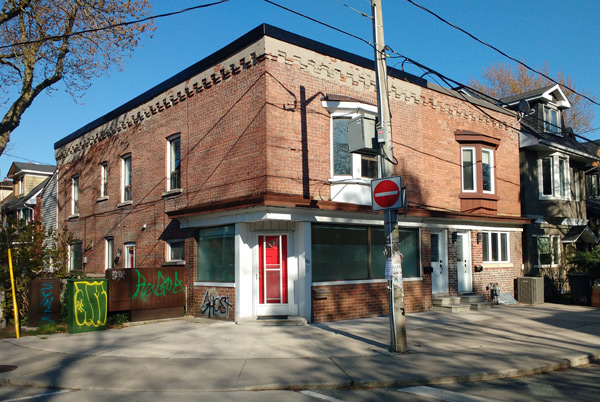 Sometimes the attached building, one in from the corner, has also been used for commercial purposes. 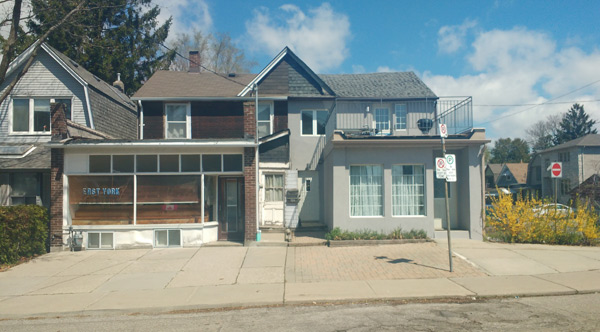 The ground-floor extension to the curb is also sometimes a feature — possibly a case where a building was originally residential and later converted to retail. But most corner commercial buildings appear to have been purpose-built. 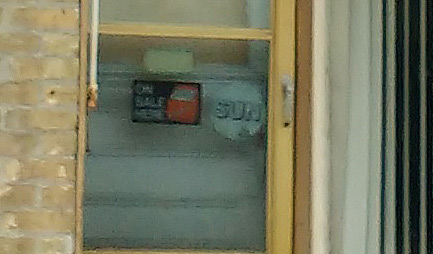 Some have been greatly changed, but the indicators discussed above suggest to me that these were once corner commercial buildings too. 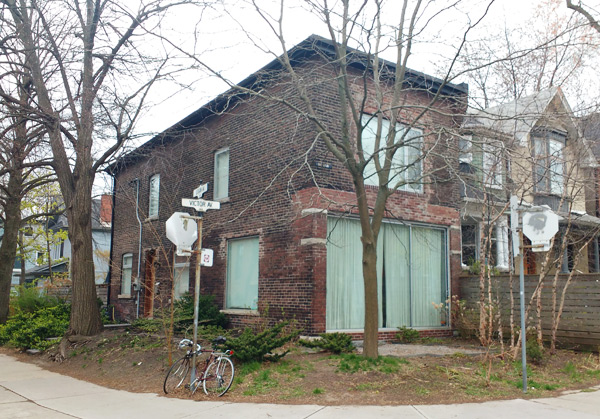 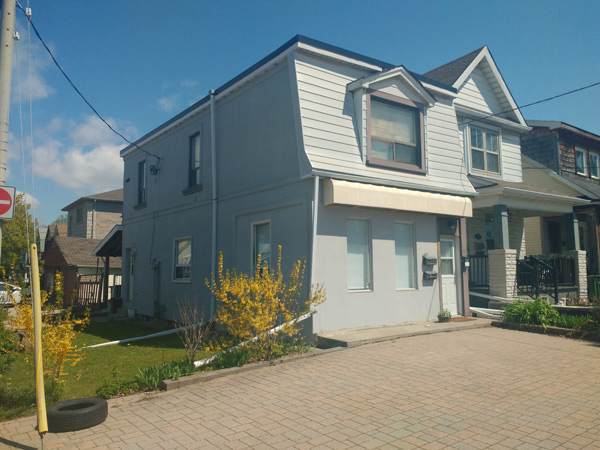 Some streets that are apparently residential but designated by the City as collectors (PDF), such as Logan Avenue and Sammon Avenue, have these former stores on practically every block. On these streets, former corner shops often appear on two of the four corners of an intersection — perhaps they once offered different services.

But there are others hidden here and there on purely local streets, too. In these cases, they usually seem to be the only one on the intersection.

If anyone has further knowledge about or experience of these in-neighbourhood former and current commercial spaces, please share it in the comments.

Addendum: more images of former and current corner stores in other parts of Toronto, photographed by Charles Marker, can be found in Fonds 485 of the City of Toronto Archives.