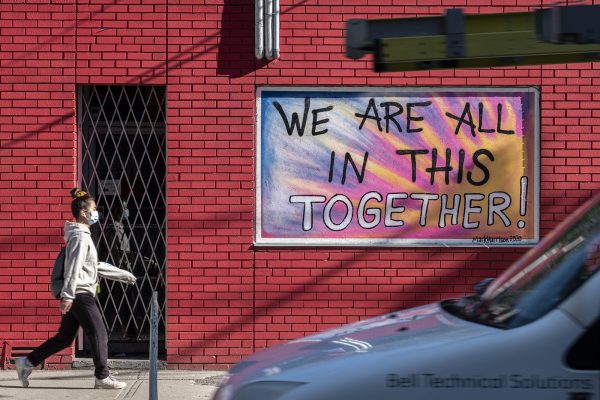 In a great display of community collaboration, five Toronto-based organizations dedicated to improving and enhancing the city’s public realm have come together to advocate for safe and viable ways for Torontonians to navigate our city on foot and by active transportation. The initiative, led by Cycle Toronto, Walk Toronto, The Bentway, Park People and Spacing, is centered around an emerging network of bike lanes, multi-use trails, parks and ActiveTO closures for recreational and commuting purposes. These “safeways” are both a critical response to the current moment and hold the key to a safe and sustainable post-Covid-19 future.

Covid-19 has shone a light on what is working and what is not, and has raised the ante. As the weather turns and restrictions begin to be lifted, Toronto is joining the dozens of cities around the world — Berlin, Bogota, New York, Paris, Oakland, Milan, Vilnius, Vancouver, Calgary, and Brampton, to name just a few — that are rapidly expanding networks of safe ways to move around the city during the pandemic, turning over hundreds of kilometers of traffic lanes and in many cases entire streets to pedestrians and cyclists.

This shift is both an answer to the practical need for new ways of moving around the city on foot and by bike to get to work and essential shopping and also a way of addressing the insatiable desire to be outdoors while respecting physical distancing. A new form of ‘Emergency Urbanism’ is revealing the promise of what could be. A slow march has become a quick step as improvised ‘pilots’ expand the realm of the possible, testing hard-wired assumptions about what works. As this happens, this response is revealing an entirely new way of using the city laced by interconnected safeways.

This response is a powerful demonstration of city resilience, providing essential choices and work-arounds in a moment of crisis but also pointing the way to adaptations that have great potential to become permanent. As we experience the change, the momentum is unlikely to be reversed. Toronto has been slow off the mark but we believe this can also be the city’s opportunity to boldly join the parade.

This ‘improvised’ shift is dramatically accelerating a movement that was already underway. Toronto is evolving into a great and densely populated city. It has a wide range of existing parks and trails including the Martin Goodman Trail across the waterfront, trails in the ravines and river valleys, and a limited number of protected on street bike lanes. What we are still missing, however, are fully interconnected city-wide networks for real transportation as well as for recreation. 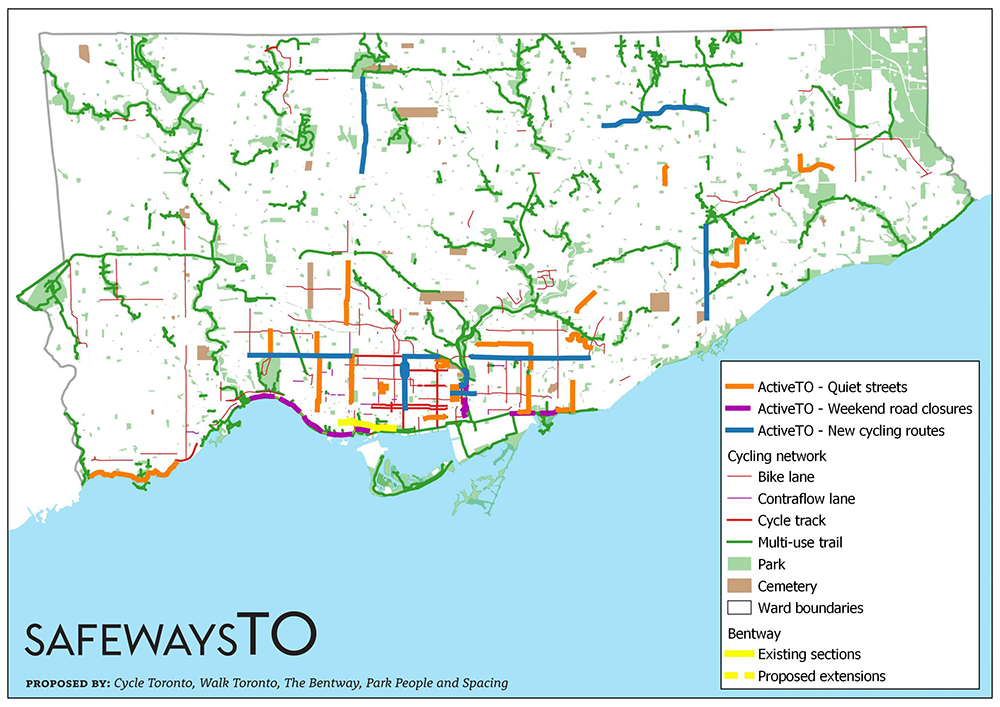 To demonstrate the emerging potential of this network Cycle Toronto, Walk Toronto, The Bentway, Park People and Spacing have come together to compile and release an intuitive and accessible SafewaysTO map that is accessible at https://tinyurl.com/ydcayec2. You can also view a static map (as of June 4, 2020).

It shows, in one place:

The map — a work in progress — serves two purposes. It helps Torontonians access and use the safeways we now have.  It also sets the stage for what comes next, a new way of navigating the city as we continue to grow and complete the network not just downtown but throughout the city. The map is not about an end state but a beginning, to provide encouragement for further additions and improvements.

This SafewaysTO network of is not a frill or a non-essential “nice to have.” A generously endowed and welcoming network of public safeways provides a vital service and offers significant benefits for public health both physically and mentally. We were already in the midst of a public health crisis, exacerbated by sedentary lifestyles where an over reliance on the automobile and a tendency to spend long hours in front of screens has produced an epidemic of obesity as well as increases of diabetes and heart disease — especially alarming among children.

The Covid-19 crisis has put a premium on public spaces where people of all ages can get out and participate in active pastimes, simply walking and cycling, making these health-promoting activities part of their daily life routines. As things open up we will need safer alternative ways for cyclists and pedestrians to get to work, school or shopping. Many potential users who do not currently feel safe will be encouraged to use these expanded networks, not just during the summer months but all year around, as we see in the Nordic counties, for daily travel throughout the city as they find themselves less hemmed into narrow sidewalks and unprotected lanes by speeding traffic. This is not to replace public transit, which will remain a vital necessity, but to supplement it.

The pattern of safeways we have now is still fragmented and piecemeal, and parts of the city, particularly the inner suburbs, are not yet well served.  There is now an opportunity to build on the momentum to develop a unique made-in-Toronto solution combining both on street and off street components, our unique ravine system with trail connections, and our vast network of over 2,400 laneways, which, combined, extend for more than 250 kilometres. Our future success depends on resourcefully exploiting these arteries and veins, which can be stitched together with hydro corridors, rail lines, stormwater management systems, flood-proofing plans, and related transportation initiatives, to address many of the city’s current deficiencies.

By transforming these underutilized spaces more creatively we create opportunities to link existing and new green spaces into continuous interconnected webs. The entire city has the potential to become more park-like, green, and connected for people on foot and on bicycle. There has been a dramatic and noticeable impact on the environment. The air is cleaner, nature is more evident, and we can hear sounds of city life that were drowned out by traffic. What we are seeing and feeling intermittently with the temporary closings on Bayview and Lakeshore Boulevard, is a vivid demonstration of the 8-80 principles as children and seniors are encouraged to experience these safe spaces on their bikes.

The entire city will benefit as it becomes more connected for people of all abilities and ages on foot and on bicycle, fostering residents’ ability to move around relatively freely and experience more of the city, in ways that break down perceived barriers between neighbourhoods and districts as flows become more continuous. With time, the examples of connection that we are creating ‘on the fly’ today must become the rule.

In these glimpses of what the city could be like, the distances shrink with increased continuity for active transportation. Through a Vision Zero lens the city becomes immeasurably safer for all users. And perhaps counter-intuitively for those who need to drive, the greater the success of the SafewaysTO network, the more they benefit by freeing up space in the rights-of-way as more people use them and get out of their cars.

The partners in this initiative have come together out of a common interest in improving the ways we get around and making our city safer, more welcoming and inclusive.

For more details on the SafewaysTO initiative and to provide input and refinements to the mapping visit www.safewaysTO.ca. Please the hashtag #SafewaysTO when sharing the map.

The SafewaysTO map was prepared by Sean Marshall, a member of the Walk Toronto steering committee.