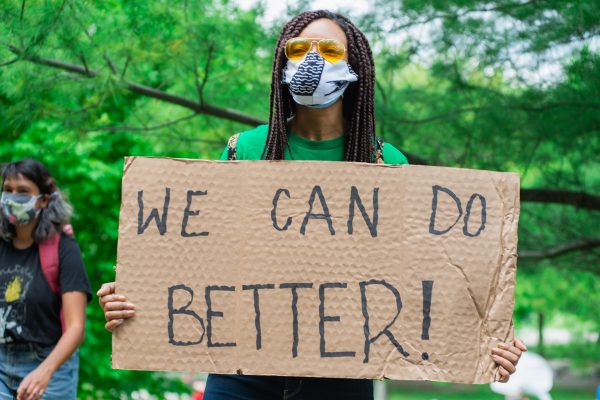 What can be said about chief Mark Saunders’ sudden departure from the Toronto Police Service (TPS)?

In truth, I am neither happy nor disappointed about it. Instead, I am concerned about the optics of putting another Black person into a position where they’ve historically never been (i.e., Toronto police chief), and then celebrating the moment as though community relations between police and Black community will improve as a result.

The list of seven potential candidates who might replace Saunders — published last week in the Toronto Star — includes Peter Sloly, who is Black and who lost out to Saunders for the chief spot in 2015, as well as one woman, Shawna Coxon, who is currently in charge of the communities and neighbourhoods command. If the structure of policing stays exactly as it has been, a Black person (or a woman for that matter) will never fix longstanding issues.

As compared to previous chiefs — Julian Fantino (2000-2005), who had an aggressive ‘tough on crime’ attitude, and his successor Bill Blair (2005-2015), who was frequently in conflict with then-councillor Doug Ford over his personal relationship with Pringle, among other things — Saunders was different. He was not aggressive and he often tried to find a middle ground, which could have been interpreted as weak by some people.

At Saunders’ retirement press conference, Mayor John Tory sang his praises. But it wasn’t that long ago that Tory (who, to his credit, has evolved on the matter of anti-Black racism) openly criticized Saunders for acquiescing to Black Lives Matter Toronto — a group to which Toronto Police Association (TPA) president Mike McCormack has been tone deaf from the beginning — for the removal of uniformed police from Pride.

One thing about McCormack that I appreciate, however, is that he is at least consistent in challenging anything in policing that appears to favour the Black community.

In 2018, McCormack supported a TPA-led non confidence vote on Saunders’ leadership. While the vote was in part a response to the Transformational Task Force’s 2017 action plan, which was proposed by Saunders and Toronto Police Services Board chair Andy Pringle, the optics of this move, coming on the heels of Saunders’ BLMTO/Pride decision, can’t be ignored.

At the time of the non-confidence vote, the TPA board of directors — who are all white, and, with the exception of Helena Briand, all male — wrote that the vote was meant to send a message not only to the Chief, but also elected city leaders, and the community (by implication, the Black community) that its members no longer believed that Saunders’ actions were “in the best interests of the membership and the community.”

But demographics also matter. The TPA told Global News that 47.3 per cent of its members participated in the vote, representing just under half of the 8,000 uniform and civilian members of the TPA. Consider that a 2015 CBC report found that while TPS is one of the more racially diverse in the country, roughly 75 percent of police officers are white. This in a city in which about half the residents identify as white. Across the country, police departments, with the exception of Halifax, do not reflect their communities’ racial diversity and Indigenous populations.

This lack of diversity in the police force plays a major role in steering the conversation away from issues that could directly improve police interactions with Black and Indigenous communities.

That Saunders stepped down in the middle of a pandemic, amidst global anti-Black racism protests, and at a moment when the public, not the police, is demanding the reallocation of funds away from policing, speaks volumes not only about his inability to live up to the title as the city’s “first Black Chief,” but also the power of the TPA to drive out any chief who doesn’t toe the party line.

In this sense, his departure shouldn’t have come as a surprise. Saunders was always a lame-duck appointment, following the lead of the TPSB or Tory more often than challenging or disrupting the culture of policing itself.

As for the police union, which was officially created in 1956 to promote the interests of its membership, the organization’s stated objective is to “generate public and political interest on the vital importance of police work in the everyday life of our community.”

One of the problems with the TPA’s presence in police politics is that they hinder reform. For example, in response to the tragic death of Regis Korchinski-Paquet, in a statement, the TPA refuted accusations of police misconduct, urging the public to wait for the results of a Special Investigations Unit (SIU) investigation. The SIU is an independent agency that investigates incidents involving police that have resulted in death, serious injury or allegations of sexual assault. However, the SIU has little power to do anything.

In the case of D’Andre Campbell, who was shot and killed by Peel Region police, the officers involved are refusing to speak to the SIU, and the agency, in turn, cannot legally force them to cooperate. Further, they can’t force police officers to submit their notes either, pursuant to Ontario Regulation 267/10 of the Police Services Act.

Thus, police chiefs have no real power to change policing unless every level of policing is on the same page, from the mayor to TPA to TPSB. For that reason, the racial identity (or gender) of the next chief doesn’t really matter if there are no fundamental changes to police governance.

Calls to defund police and diversify board members are growing across North America, including here, where a growing number of city councillors are calling for change. In this moment, we must also demand that all levels of policing undergo review. Systemic racism is not about individual actors making mistakes or just a few “bad cops.” It is about the policies and practices entrenched in established institutions, like policing.

Saunders might have held the blade, but he does not control the handle. Change can only come from a re-imagining of all levels of leadership. Maybe it’s time we democratize policing by giving the public a say on who sits on the TPSB and TPA, like we do with the mayor and city council, since the work they do affects what a chief of police can accomplish in the first place.

Cheryl Thompson is an Assistant Professor in the School of Creative Industries at Ryerson University. Her next book, Uncle: Race, Nostalgia and the Politics of Loyalty will be published by Coach House Books next February. Follow Cheryl on twitter at @DrCherylT.