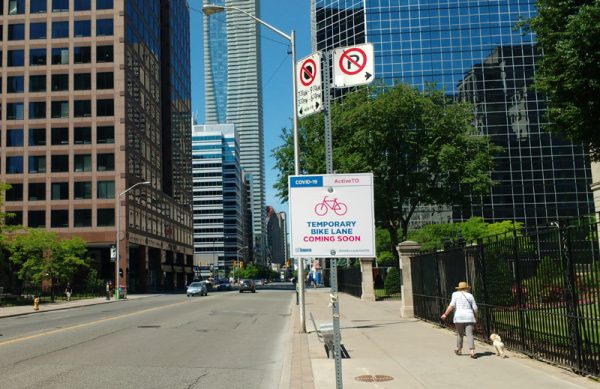 One of the distinctive and ubiquitous characteristics of main streets in the older parts of Toronto is the rush hour curb lane. For two or four hours a day on weekdays (inbound lanes in the morning and outbound ones in the afternoon, or sometimes both sides at once), curb lanes that are usually used for parking become driving lanes. It’s a response to the narrowness of the main streets in the old parts of the city, which can usually only accommodate two lanes in each direction. But it’s also based on the car-centric assumption that the primary purpose of any street is to move commuters in private vehicles as fast as possible.

These rush hour curb lanes are impediments to a variety of non-car-centric initiatives. They make installing bike lanes complicated, since bike lanes are fixed but the edge of the driving lane varies over the course of the day. And they prevent initiatives to improve public spaces that have been popular in other cities, like parklets – where parking spaces become mini-parks – and curb lane restaurant patios in parking spots, because that space needs to be clear for commuting for part of the day.

But the pandemic has induced a crack in the rush hour curb lane dominance. The drop in vehicle traffic, the need to provide an alternative to transit, and the need to support our devastated restaurant industry have changed the City’s priorities. On the Danforth and on Bloor East, the rush hour lanes are being temporarily abandoned. In their stead, separated bike lanes will be installed (PDF), and parking will become all-day (though the number of spaces will be somewhat reduced). And on the Danforth, some of that parking space will be used for restaurant patios and parklets to support local merchants. 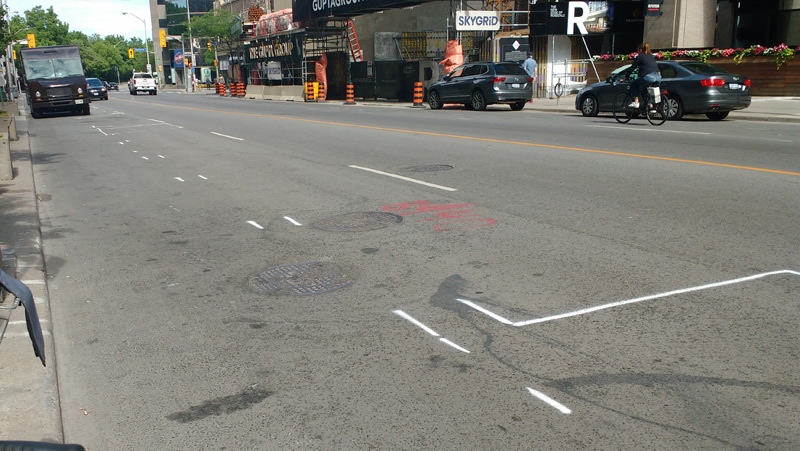 Similar changes have already been implemented on University Avenue, where a bike lane has taken over the curb lane, and the second lane from the curb looks like it will accommodate the parking that was previously available in the curb lane outside of rush hour — only now it will be all-day parking. (The parking aspect has not been noted much in either press releases or media coverage — in the staff report it was presented as an option but the paint seems to indicate that option was chosen). 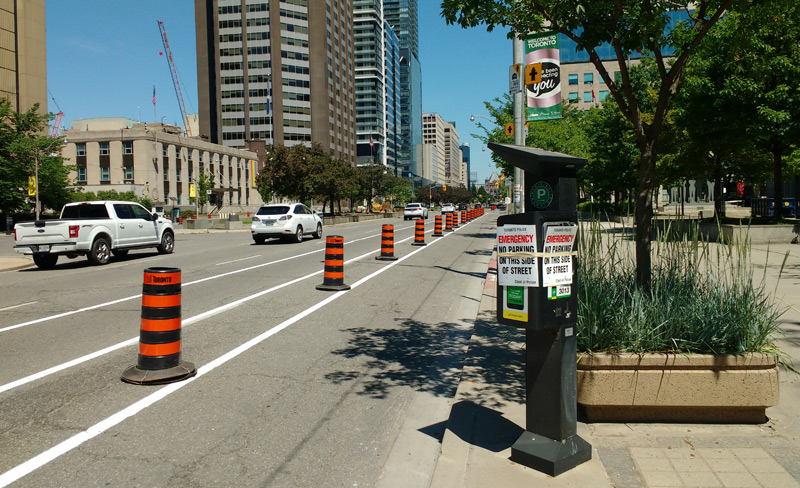 In the lane to the left of the new bike lane on University Ave., it appears that solid lines mark future all-day parking. 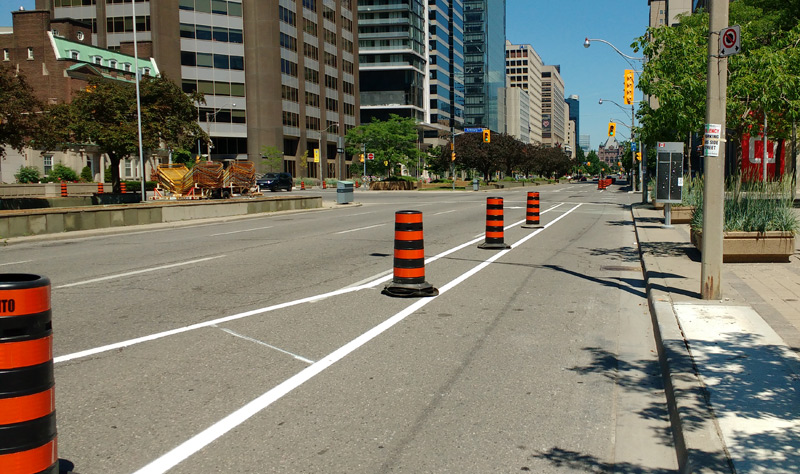 For nine years, I biked along the Danforth and Bloor East almost daily (outside of winter) to get to a job at the University of Toronto, and I’ve also driven that route occasionally. In my experience, those rush hour curb lanes were not much used by vehicles. One of the reasons was that these lanes were used by drivers waiting to make a right turn, and other drivers did not want to get stuck behind them (the new configuration will include right turn lanes, fully separate from the bike lanes). Another reason for avoiding them was the number of drivers who used the open curb lanes for illegal stops for a drop off or delivery, which meant that drivers in that lane could count on having to make an awkward merge back into the centre lane at regular intervals. 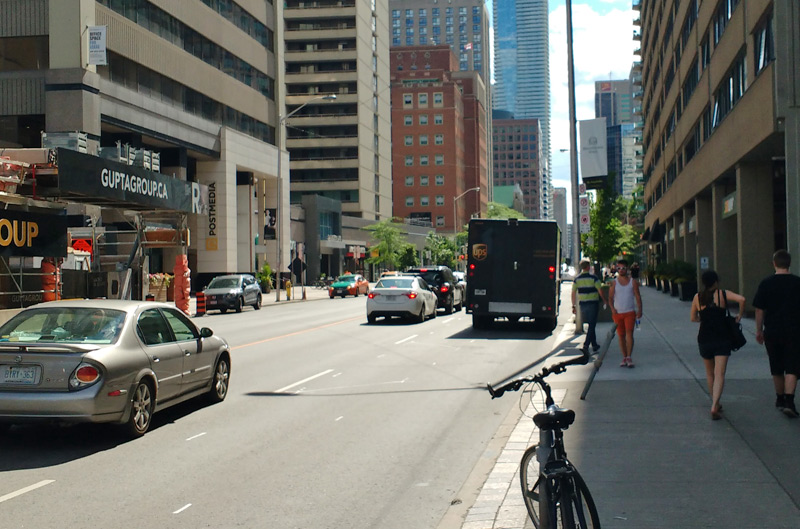 The other primary use of the rush hour curb lane was for aggressive drivers to dangerously pass other drivers on the right.

So, really, it’s not much of a loss. It’s also a clever way to cut a Gordian knot of opposition to bike lanes. The problem has always been local merchants worried about losing parking for customers (even though studies show drivers were not a major source of customers). By sacrificing the rush hour lane, the City can not only install bike lanes, it can also maintain a lot of the parking on the street, and make it all-day, removing the danger of being towed at rush hour.

University, Danforth and Bloor East, to varying extents, have some width to work with. The situation is a bit more complicated on some main streets with streetcars, because the lanes are too narrow to include both parking and proper, safe bike lanes. But an image from the city’s CaféTO page suggests the city is planning to close the rush hour lanes in some places on those streets as well, where there are restaurants that seek patio space in the curb lane – leaving some space for cyclists, though not a proper designated lane. It would be similar to the current layout of King St. downtown, but there would also be (all-day) parking spaces where patios are not needed.

Another question could be spaces like the stretch of Gerrard between Cabbagetown and Regent Park where the Gerrard Street bike lane is interrupted. There are no restaurants along this stretch – could the parking/rush hour curb lane be sacrificed in order to fill in the cycle lane gap? 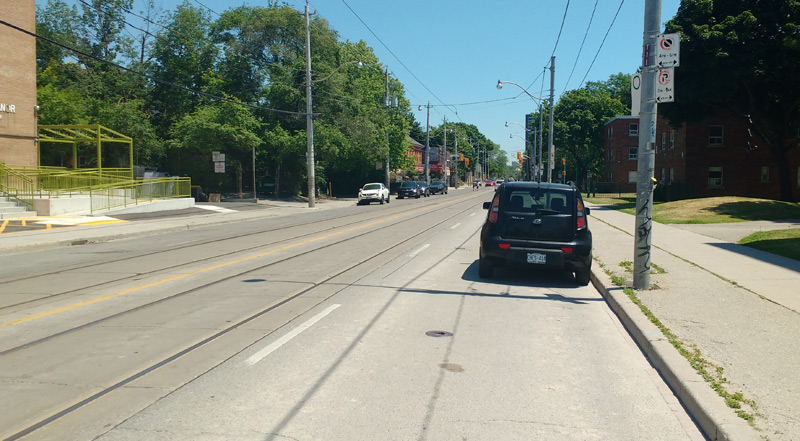 Gerrard St. between Parliament and River

There’s a bigger message at the core of these rapid changes. Cutting the rush hour curb lanes indicates a shift in the underlying philosophy of what streets are for. For the moment at least, they are no longer primarily about throughways for commuters travelling in private vehicles. Instead, they are the core of a neighbourhood. There’s plenty of issues with parking as a concept, but by prioritizing parking over travel, the City is saying that when it comes to driving, main streets are first of all for drivers going to a neighbourhood, not for drivers passing through. Main streets are now destinations, not thoroughfares.

One of the lessons of the pandemic has been that people are spending more time in their own community and getting to know it better rather than travelling for work, pleasure, and shopping. By prioritizing cycling, patios, parklets, and parking over commuting by car, the City is recognizing this lesson.

Finally, this shift is an indicator of the evolution of the idea of “flexible streets” – the idea that a street can serve different purposes at different times. It’s an idea that’s become popular with the expansion of “open streets” where a street is dedicated to cycling and walking for a day every week. In a sense, Toronto has had flexible streets for decades, with its curb lanes changing their purpose over the course of every weekday. But now we’re moving from using the concept to benefit driving to using it to benefit cycling and walking – for example with the weekend closings of one side of Lake Shore Blvd. and elsewhere – and also for the benefit of pedestrians and restaurants, by enabling an expanded use of parklets and curb lane patios during the warm months, which may become simple parking in the coldest months. (Market Street, beside St. Lawrence Market, was an early and innovative example of this idea).

The true test of this change will be whether these adjustments become permanent. So far, the changes are being billed as “temporary” for the period of the pandemic. But it’s easy to imagine that they will be popular and may never be removed. For the Danforth, Bloor East, and University, discussions have been going on for years about bike lanes in these locations, and that background was no doubt useful in the helping to implement these changes quickly. But it seems like the pandemic has triggered a rapid and innovative solution that benefits a wide range of different interests (with the exception of drivers who like passing on the right, and they receive no sympathy from anyone). Once we realize all the things we can do with curb lanes, we may never go back to sharing them with rush hour traffic.