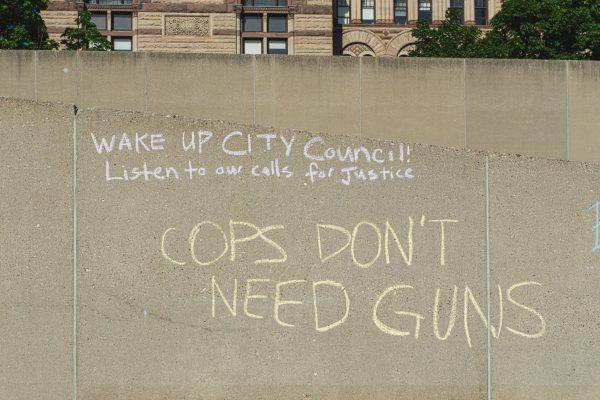 For all the heat and light generated by Monday’s debate over defunding or detasking the police, the compromise — or compromised, depending on your perspective — motion that passed Toronto City Council was, in many important ways, little more than an exercise in buck-passing.

The recipient of said buck is Doug Ford’s Tory government; the premier, I’ll predict, is going to pass it right back.

Many of the most potentially dramatic moves in the heavily amended motion that council eventually approved turn on requests to Queen’s Park to amend the Police Services Act (PSA) and the City of Toronto Act (COTA).

These three asks speak to some of the most important and long-standing flaws in the governance of the Toronto Police Service. The TPS was shielded by law from nosy municipal questions about its spending. Its civilian masters, the Toronto Police Services Board, could dangle a sword of Damocles – appeals to the OCPC – over council’s head if the latter started making unwelcome demands. And the one entity with an explicit mandate to scrutinize municipal agencies – the Auditor General – had no authority to breach the fortress that is 40 College Street.

How come the TPS is so bloody expensive? Why does the agency spend so much on gear and so little on community programs? Why does it ignore the recommendations of a former Supreme Court justice, not to mention numerous coroner’s inquests, to do far better when it comes to responding to mental health calls?

The reasons are structural, and they’re itemized in the paragraph above. This, in part, is what systemic looks like.

It’s worth noting that Mayor John Tory’s initial motion to council, which was long on mollifying rhetoric and short on particulars, barely acknowledged that much of the heavy lifting of reform simply isn’t in the jurisdictional purview of Toronto council. His oversight is, well, perplexing, given that the mayor is a lawyer and has been an ex-officio member of the TPSB for the past six years.

As Monday’s debate progressed, council filled out the picture, with key amendments by Josh Matlow, Kristyn Wong-Tam and John Fillion that acknowledged the fact that council, once again, has to go cap in hand to Queen’s Park to secure policy reforms that were debated and democratically approved.

Will Ford Nation play ball? While the premier acknowledged earlier in the summer that there’s systemic racism in policing, it’s by no means clear that his government will make the changes that Toronto council has requested. Certainly, there’s no provincial response to council’s amended motion that I have been able to find, and yesterday’s holiday slowed the news cycle.

I’m skeptical because Toronto is just one of five large regional GTA police services, and so far none of the other councils – Halton, Peel, York and Durham – have asked for such reforms. Perhaps Queen’s Park will throw Toronto a bone and make the requested change to COTA. But the provincial Liberals swatted aside this very same request from city council five years ago, and I don’t see their successors being any more amenable.

The other giant source of inertia here is history. There was a time when municipal police forces were used for patronage and intimidation by powerful ward-heeler pols. The move to reform policing, which began during the Progressive Era of the early 20th century, involved wresting municipal political control over local police departments. Progressivist reformers thought such changes in governance would de-politicize policing, but those idealistic notions evaporated in the 1960s. The civil rights era brought about more changes meant to improve relations between the police and communities, often through various citizen oversight bodies. (A useful academic summary about the history of police governance reform is available here.)

The upshot locally is that the provincial government still exercises, through legislation and its three appointees to the TPSB, a high degree of control over local policing, a state of affairs that manifests in the form of swollen budgets and the TPS’s sense of entitlement about being mostly exempt from close-in budgetary or programmatic scrutiny. After all, how else can one explain why the TPS ignored Frank Iacobucci’s recommendations to once and for all confront the cops’ tendency to use violence against (mostly racialized) people in crisis?

I’d be shocked if the provincial government went along with reforms that give Toronto politicians the right to nitpick at law enforcement budgets, especially because the Police Services Act still says that local councils and police services boards must provide “sufficient” funding without actually spelling out what sufficient truly means.

The question, in fact, is what happens if (or rather when) Ford Nation says no to the big governance requests that emerged from this week’s council stand-off.

In Toronto, it’s absolutely clear the police reform genie is out of the bottle, as it should be, and I’d predict that council will soon find itself in a position where it has to deliver meaningful change, on issues like anti-Black racism and mental health, in the absence of the aforementioned legislative changes.

Consider this footnote about the auditor general’s access to police books. “For the longest time,” former TPSB chair Alok Mukherjee told me, “and certainly predating my tenure, the AG was invited in by the [police services] board to conduct annual audits of a wide variety of programs and functions – from police investigation of allegations of sexual assault to the selection of a new IT system.” (Those reports are available here, searching on “Toronto Police Service”.)

“[Former Toronto AG] Jeff Griffiths would come to see me and the Chief every year in preparation of his annual work plan to discuss areas of possible audit. Once he had decided what audits to conduct, he would have complete access to all information and would have complete independence in his work.”

As Mukherjee adds, the current AG, Beverly Romeo-Beehler, proposed formalizing this arrangement, but John Tory and Andy Pringle, the former TPSB chair, nixed the idea. The city’s AG hasn’t darkened the doors of 40 College since.

The system, it seems, is systemically resistant to change and accountability — something to remember when the next chapter of the police reform saga begins to play out at City Hall.