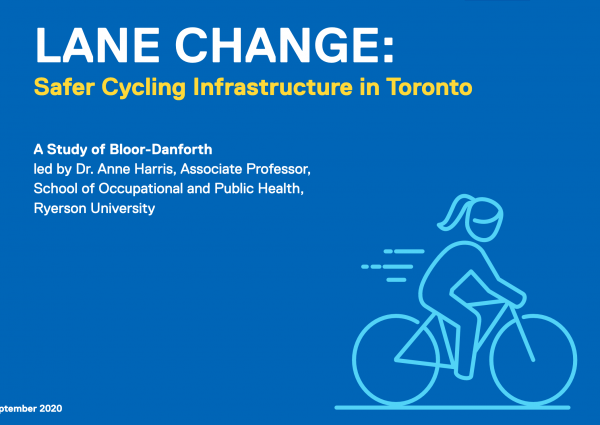 City Building Ryerson has released a new report, Lane Change: Safer cycling infrastructure for Toronto, based on research led by Dr. Anne Harris of Ryerson University’s School of Occupational and Public Health and funded by the Metcalf Foundation.

Applying a public health lens to road safety, the study quantifies the potential injury impacts of separated cycling infrastructure along Bloor-Danforth. It takes an epidemiological approach to estimate how different cycling infrastructure designs (cycle tracks, protected lanes, painted lanes and no infrastructure) could impact injuries and fatalities, both in the context of the global COVID-19 pandemic and in general.

Perhaps not surprisingly, fully separated cycle tracks were shown to prevent the most potential injuries and fatalities when compared to other types of cycling facilities (like painted lanes and partially separated cycle tracks). What’s new is that the study quantifies the potential impact with real numbers, based on local evidence, to support informed advocacy and decision making regarding dedicated and protected cycling infrastructure. Key findings include:

You can download the report on the City Building Ryerson website to learn about the research project, plus highlighted takeaways, a calculation toolkit and policy action items.