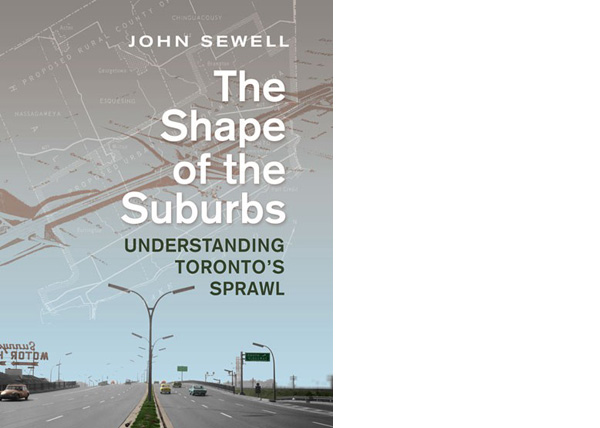 When John Sewell’s book The Shape of the Suburbs: Understanding Toronto’s Sprawl came out in 2009, I read it soon after publication, flagging passages with the intent to write about in for Spacing. But life and work intervened, and it’s been sitting on my bookshelf, crammed with book darts, yellow sticky notes, and scribbles on scratch pad paper, for the past decade. Now I’ve finally found a moment and reason to go back to it (for another project). It’s still an interesting and relevant piece of work, so I’m sharing not so much a review as some of the insights it contains.

The goal of the book is nothing less than an urban policy history of the transformation from rural to suburban of what are now called the 905 municipalities (after their area code) that sit just outside the bounds of what was, for almost half a century, Metro Toronto (now the amalgamated City of Toronto). The book also veers into the history of Toronto and its inner suburbs as well, looking at planning and the eventual amalgamation. Some of the book is now a bit dated, but most of it is historical and continues to provide valuable background to how Toronto and its outer suburbs developed the way they did.

The book is relatively short and concise for the scope of its goals. It gets into the weeds of urban policy and governance, and so can be a bit dry in places, but it is given consistent energy by Sewell’s steady beat of outrage at the short-sightedness and pernicious outcomes of government policy – or lack of policy – in developing these suburbs. Sewell is famously opinionated and contrarian, and he does not pretend otherwise, but he has also done a great deal of research to uncover the often obscure history of how the Greater Toronto Area (GTA) evolved into the shape it is today.

The core argument of the book is that the outer suburbs evolved into an unsustainable sprawl because the provincial government subsidized the building of basic infrastructure, especially water and sewers but also highways and transit. Since the outer suburbs did not have to carry the costs of this infrastructure, they had no incentive to ensure that development was compact enough to be self-sustaining. An aggravating factor was that, when development began, these municipalities had small populations and no in-house expertise to manage planning, nor was any effective planning expertise set up to help/guide/direct these municipalities externally. As a result, there was no management of development to ensure it was efficient and sustainable.

(It’s interesting to note that, today, these municipalities have fully-fledged planning staff and are all working to introduce more dense, urban areas into their sprawl. The paradox was that this expertise couldn’t be developed until after the population – and the revenues it brings – began to expand through development in the first place).

Sewell contrasts this sprawling development in the outer suburbs with what he considers a much healthier planning and development process in what was the two-tier government of Metro Toronto, with local municipalities operating alongside a regional government. When Metro Toronto was established in 1953 – as an alternative to a proposed amalgamation of municipalities – much of Scarborough, Etobicoke and North York was undeveloped. Sewell argues that the two-tier structure created a system where local and regional perspectives generated a kind of creative tension that led to better outcomes. As well, both Metro and the old City of Toronto had strong planning staff who could help shape development more sustainably. Indeed, Toronto’s inner suburbs, although less dense than the old city, are almost twice as densely populated as the outer suburbs. They are also significantly denser than comparable areas in most other North American cities, argues Sewell.

One issue that sits in the background of Sewell’s argument is the amalgamation of Metro and its constituent municipalities into a single city by the Harris provincial government in 1997-8. Sewell, a former mayor of Toronto, was a co-leader of the opposition to this move, along with Kathleen Wynne, who later became premier of Ontario. One of his last chapters details this struggle. So his praise of the two-tier Metro system is, in part, an argument that amalgamation was unnecessary and destructive. I’m not that familiar with pre-amalgamation Toronto politics but I imagine there could be arguments that the Metro system created problems, too.

But overall, Sewell’s argument about the subsidization of sprawl is convincing. It’s been echoed with regard to other cities by others, such as the Strong Towns website, which describes the process of subsidizing low-density development that cannot cover the costs of its own maintenance as a Ponzi scheme. And Sewell’s concise story of the discussion about and regulation of the expansion of the Greater Toronto Area over the second half of the twentieth century provides an essential guide to understanding the roots of where we are today in the GTA.

Here are a few other interesting nuggets and arguments from the book: