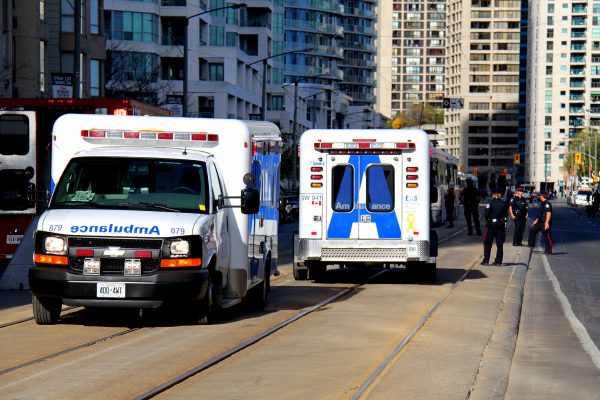 This column was originally published in Spacing‘s fall, 2020, edition. City council’s executive committee yesterday voted to recommend a $1.7 million pilot project to test a “community crisis response service” as an alternative to sending police to emotional distress calls to 911.

One way to think about the structural shortcomings of a contemporary police service is to imagine a hospital staffed entirely by ophthalmologists.

Some people entering that hospital will need nursing care, while others may have to deal with the purchasing department. Individuals using one out-patient clinic are seeking treatment for kidney disease, and, while they’re visiting, may want to buy a snack in the food court. Yet every employee in that hospital will have been trained to specialize in cataracts, retinal detachments, and other ocular conditions.

The notion is absurd, of course, and reveals the strangeness of how we do policing. We expect highly trained, well-compensated individuals with the right to carry and use weapons to do everything from baby-sitting construction sites to cracking sex trafficking rings. Yes, policing has sub-specialties – homicide, narcotics, etc. But the broader point is that we’ve created an institution that has become a catch-all for problems that don’t fit neatly into any other public service bucket.

To my ear, the overdue confrontation over policing that followed George Floyd’s murder was about two overlapping but not identical agendas: The first, de-funding, involved rolling back swollen policing budgets that have grown at the expense of other municipal services. The second, de-tasking, had to do with parsing the modern police department and looking at how some of its de facto responsibilities might be better carried out by other civilian entities.

We shouldn’t dispatch cops earning six figures to direct dump trucks. But the most urgent focus of the de-tasking debate should be laser-focused on the 30,000 annual calls in Toronto for police to respond to individuals in emotional or mental health crises. Over 30 years of inquests have shown that these calls, particularly when they involve people of colour, are most likely to lead to use of force and death.

During the council fight to slash 10% off the police budget, Mayor John Tory (who opposes defunding) tabled a motion calling on the TPS to implement the recommendations of a 2014 review into how the cops handle mental health calls.

Retired Supreme Court justice Frank Iacobucci had been commissioned by then-chief Bill Blair to do the review in the wake of the Sammy Yatim slaying. Iacobucci proposed extensive reforms, including more de-escalation training and an expansion of the TPS’s mobile crisis intervention team (MCIT) service, which dispatches cops and psychiatric nurses to non-emergency calls. While Blair endorsed Iacobucci’s work, his successor, Mark Saunders, wasn’t interested and made virtually no headway on improving how the TPS handles people in emotional distress — one of whom, of course, was 29-year-old Regis Korchinski-Paquet.

Coming out of that debate, council is expecting TPS to implement Iacobucci’s reforms, including expanding the size and availability of the MCIT service. But one could reasonably ask whether this directive will produce change. After all, inquests going back to late 1980s have called on the TPS to be better trained, less violent, and more adroit at de-escalation, yet deaths like Andrew Loku’s keep coming.

What de-tasking proposes, essentially, is for the city to establish a fourth first responder service, alongside police, fire, and paramedics. We don’t send cops to put out fires. So maybe it’s time to face the fact that we shouldn’t send them to deal with people in distress – a duty the police themselves often complain about.

A bit of urban history is relevant here: in most North American cities, municipal fire departments trace their roots to private firms that offered fire protection to people who took out insurance policies on their dwellings.

Paramedics, in turn, have dual ancestry. They evolved partly from private ambulance services, but also in response to a hugely influential 1966 study by the U.S. National Academy of Sciences on “accidental death and disability.” The authors documented how many injured people were typically rushed to hospital in police cruisers, with a significant number expiring en route.

According to a fascinating recent episode of the podcast 99% Invisible (“Freedom House Ambulance Service”), one early paramedic service began in Pittsburgh, staffed mainly by Black men with virtually no training. They had to compete with the cops to get to accident or crime victims first, and developed the skills to keep them alive while racing to emergency rooms.

Over time, observes 99% Invisible reporter Kevin Hazzard, paramedics attained professional training and certification, and became a full-fledged partner in the triumvirate of emergency services, despite years of early opposition from municipal leaders and police departments.

He observes this story could point to the emergence of a first responder service specializing in mental health and social work. “It feels like we’re on the cusp of that moment,” comments Hazzard. “You have to think someone must be saying, `who else can we bring to bear in these situations [besides police officers]?’”

It’s an excellent question, and one that points down a different route than the policy city council endorsed earlier in the summer. If council really wants to find a better and more humane way of assisting people in such crises, it should set in motion a plan to build this new type of first responder service.

Certainly, the demand exists – 30,000+ calls/year, remember — and no one needs to be reminded of the lethal consequences of inaction. To my eye, an emergency mental health service points to a safer city as well as a means of de-tasking the police that the police themselves might support. As Jack Layton used say, proposition, not just opposition.