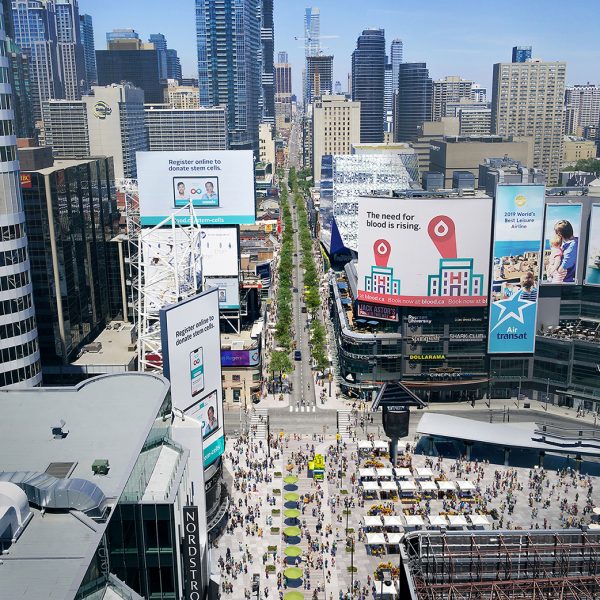 As cities all over the world rethink what their new reality will be post-pandemic, Toronto stands strong with an incredible opportunity at foot. And things look hopeful for a new direction for its iconic main street as long as the powers that be stay focused on delivering new possibilities with generational benefits, rather than focusing on the issues of the past.

Coming off an Infrastructure and Environment Committee endorsement of City Staff recommendations on January 11th, YongeTOmorrow is a game changing plan that will be voted on by City Council on Tuesday February 2nd.

For those who don’t know, YongeTOmorrow is a once-in-a-lifetime opportunity to transform Yonge Street between College and Queen into a world-class, 21-century urban destination, proposing a full and flexible redesign of the street from College St, south to Queen St, where sidewalks will be expanded, vehicle lanes modified, restaurant patios extended, and street furniture and streetscape elements added. Lined with brand destination retailers, restaurants, music venues, theatres, the Eaton Centre, and Yonge-Dundas Square, YongeTOmorrow is our chance to bring Toronto’s most historic and culturally important streets back onto the world stage. This is the moment to think boldly about the future of Yonge Street. In the wake of the successful ActiveTO and CafeTO initiatives, this is the time for yongeTOmorrow.

This proposal is largely triggered by the fact that one of Toronto’s oldest watermains, located underneath this section of Yonge Street, requires urgent renewal. Since the street will be torn up and put back together, there is a “build back better” opportunity that can be leveraged that will not come for another generation.

This is a no-brainer that should have no opposition.

Global planners are predicting, post-pandemic, need for urban spaces will be in high demand. Along the Yonge between College and Queen, you have an area that is due to have its population grow significantly. Commuter foot traffic growth will follow suit making the physical recommendations, such as widening sidewalks, essential. But there also needs to be a critical assessment of what kind of access vehicles will have along the street.

Now let’s look at the look and feel of the area. Needs love, right? That is being addressed with landscape beautification. And hopefully as consultations continue, the animation and placemaking piece will be realized for as we know bringing a destination to life is key to its short and long term success.

As the vote looms, the most important message to convey now is that this is not a urbanist vs car-lover issue.

This is an opportunity for all Toronto citizens, from all walks of life, to consider the possibilities for this project now as it won’t be a moment we will have in our lifetime again.

Too many times, ideas and projects like this in Toronto and cities around the world failed or died before they were even started because the focus was about “us vs them” instead of on all the common benefits something can deliver –  for citizens of today and generations to come.

Those working on the YongeTOmorrow team have shared that an unprecedented broad coalition has been made up of emerging and established citizens who fundamentally believe that this is the right thing to do. And do it now. But these are people who are not stopping at advocacy to get something through a Council vote. They are fired up and are willing to be part of the solution moving forward.

Coming out of the pandemic, Toronto will have an opportunity to lead North America and the world will be watching. A true calling card type street that reflects Toronto as a 21st century city is not a nice to do. It’s a must do.

And the world is indeed watching. Internationally known figures have stepped up to show support including Janette Sadik-Khan, former commissioner of New York City Department of Transportation and a global advisor on transportation and urban issues, and Tudor Alexis, Consul Général de France. The list is growing.

Co-signer to this opinion piece, Brent Toderian, put out a call to his global followers earlier in January 2021 asking them to give examples from around the world of a “new, better normal.” It was incredibly inspiring, and for Torontonians watching his social media thread grow, it showed residents the vast possibilities that exist globally to inform YongeTOmorrow plans to create something unique and special.

We are citizens who believe in the possibilities of cities. Of streets and how they can bring community together leading to a more connected, understanding, compassionate world. At the end of the day, that is the possibility. That is the goal. To live in a more symbiotic world. And this project can do more than do its part.

If you are a believer of the power of this movement, it’s up to all of us not to talk amongst ourselves and get each other charged up about how amazing it would be if YongeTOmorrow happened.

What we need you to do is pick up the phone, and if you know anyone in Toronto or live there, reach out to someone who you think has an issue with this thoughtful, responsible, forward thinking plan.  And when you reach them, listen to them. Hear them out. And hopefully, there will be a moment in the conversation where you will find some common ground, and there will be a shift to explore the possibilities of what this could be. And if for whatever reason you are someone who has issues with the proposed plan, find someone who supports and have a thoughtful dialogue as well.

We are all citizens of the same world. We use the same streets. We all want a main street we can be proud of in our cities.

The hope is that the mayor and councillors will come to the vote Tuesday with a similar temperament. Great leaders see possibilities and act thoughtfully but with decisiveness. They realize that once in a lifetime opportunities are in fact once in a lifetime.

If you are reading this before Tuesday February 2nd at 9:30am EST, you can show your support by clicking here.