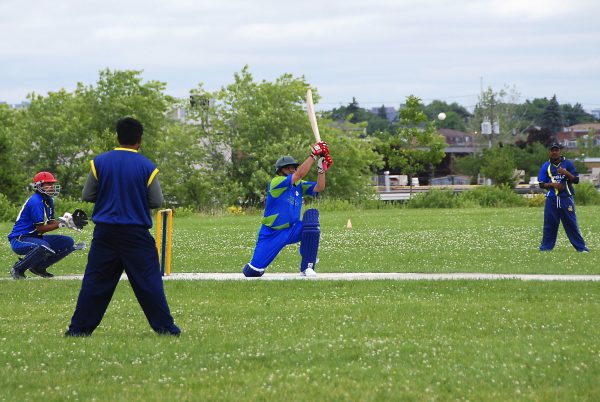 Cricket has a rich cultural history in Toronto. The sport is closely tied to Black history, following the Black Diaspora throughout the colonized world – and especially in Toronto, a British colonial outpost. In “Rebound: Sports, Community and the Inclusive City” (Coach House Books, fall, 2021), I discuss cricket as a vehicle to talk about how people can organize, animate and bring forth ideas to build a better city.

Cricket has been part of the colonial Canadian imagination longer than the Canadian project itself. According to Peter Donnelly, a University of Toronto professor of sports policy and politics, cricket has been here since the 18th century at least, and lived in the imaginations of former colonies for centuries. “It now gets very connected with two big communities – South Asian and Caribbean – plus all of those South Africans and Brits and Australians and New Zealanders that are in town are also playing,” he says.

Donnelly’s GTActivity project revealed that the game is being played more broadly than he expected. “I live in Burlington and the park has just been mowed and pegged out a cricket field in the last three or four years,” he recounts. “I was watching a game on Sunday afternoon around two years ago. It was clearly a mixed-race team, but looked like a lot of South Asians and I was talking to one of the folks on the batting side. I asked, ‘Which league is that?’ And he told me it was a hybrid district and that there were probably 10 to 12 teams.

Peter spoke to a batter who was a librarian from St. Catharine’s, Ontario. “I said, ‘Well, what kind of people are playing?’ This guy is a brown guy with a Canadian accent. So he says to me, ‘We have people from everywhere – you know, South Asian, West Indian, Australian, New Zealand and Britain you know – and he said, ‘Pretty much everybody except Canadians.” Peter and the batter shared a good laugh over that one.

“So, this identification – as cricket as being ‘not Canadian’ – and you know, all these guys were Canadian!”

Cricket as “not Canadian.” This is a wild notion to consider, given that Greater Toronto is home to one of the largest diaspora Caribbean communities in North America. This contingent of people have really had a thorough impact on Canadian life (and yes, that includes Canadian sporting life), past and present.

Our arrival to Canada in the 20th century coincided largely with Canadian economic growth and varying immigration policy. To be frank, here: Twentieth century immigration was largely designed to prohibit people of colour. The 1910 Immigration Act saw the law overhauled, with the inclusion of the “Continuous Journey” regulation, which gave the government sweeping powers to exclude people explicitly on the basis of race. These amendments are aimed at stopping immigration into multiple regions across the country. While some restrictions were lifted after the First World War, the law was consistent and restrictive, although there are examples of exceptions – from India, for example, wives and children under the age of 18 were allowed in. From 1945 to 1960 – primarily corresponding with the “West Indian Domestic Scheme” – Canada saw its first influx of Caribbean immigration, mostly from Jamaica and Barbados.

The West Indian Domestic Scheme was Canada’s first notable immigration policy toward the region. It limited entrance to Canada to low-wage female workers. The scheme, a key issue in 1960s Black-Canadian activism, saw mainly the arrival of Jamaican and Barbadian women who came as domestic workers, nurses and students. For one year of service, these workers were granted permanent residency, the opportunity for education and employment in other fields, and the eventual opportunity to send for other family members to join them in Canada.

Activists argued that the scheme was too gendered and too restrictive, preventing many workers from seeking permanent residency and citizenship in Canada – an argument and scenario still seen in many similar news reports and case studies to this day. And even then, new immigrants would face their fair share of abuse, discrimination and treatment.

The African American Intellectual History Society (AAIHS) spoke about discrimination, treatment and, specifically, “the social stigma attached to domestic work had negative effects on the women who participated in the scheme,” said their 2016 essay. “West Indian domestic workers in Toronto not only faced exclusion from white Canadian society; the low status associated with domestic work meant they also had to contend with isolation from other West Indians, living as “‘outsiders’ among the ‘outsiders.’”

Famously, the late Austin Clarke addressed the scheme in his fiction and non-fiction writing. “Clarke attacked the plan for forcing West Indian women to submit to the ‘undignified classification of domestics’ regardless of their skills and for putting massive barriers in the way of West Indian men like him who had been admitted to Canada temporarily as students and had to marry Canadian women to gain landed immigrant status instead of being admitted on their own merits,” reads the AAIHS essay, citing his 1964 essay.

But, a “liberalization” of immigration policy emerged from the 1960s and the Canadian Immigration Act, which led to the arrival of about 64,000 people from the Caribbean. Policy officially pivoted its focus from race and nationality to education and skill, ushering in an era of high immigration in Canada, especially in Toronto.

The city, still largely Anglo-Saxon and white, saw rapid population growth and an evolving demographic facelift although some critics felt the new policy was as racist as its predecessor. “Because of the high barriers it put in front of the large numbers of unskilled West Indians who would most benefit from a move to Canada; furthermore, it was detrimental to newly-independent West Indian nations because it created incentives for skilled people to leave while doing nothing to provide an outlet for the chronically unemployed,” the report says.

According to Statistics Canada, Canadians of Caribbean origin represent one of the largest non-European ethnic-origin groupings in Canada. They have been coming to Canada (and to the GTA) in large numbers. Between 1996 and 2001, for example, the number of people who reported Caribbean origin rose by 11 per cent. At the time, only four per cent of Canadians self-identified as Caribbean-born.

Cricket, to me, comes very close to understanding the newcomer experience in this country, over the decades and certainly in this day and age. The game shows us so much of who has arrived here. As well, listening to the participants’ stories and understanding the spaces where they have played — from Eglinton Flats to Centennial Park to the University of Toronto Scarborough campus — could direct policymakers how to engage and mobilize residents in order to create infrastructure for safe and inclusive environments.

Municipalities are at the frontline of the work to create these environments, says the AAIHS essay. “Their proximity to citizens and capacity to act rapidly are significant assets to achieve these objectives. In response to demographic changes, including those resulting from migration, municipalities confront discrimination, racism and various forms of hate crimes.”

The report goes on: “Diversity and inclusion policies, programs and initiatives at
the local level are needed to tackle these challenges head on and create a living environment in which all citizens, including newcomers, can live peaceful lives, access opportunities to reach their full potential, and contribute to the cultural, social, political and economic life of their new home.”

Cricket is not just an import sport. It’s a welcome mat and a landing pad for generations of Canadians. Nor is cricket `not Canadian,’ as it is as bound to the Canadian imagination as hockey and maple syrup.

Rather, cricket helps to explain how we think about forming sports culture for communities that have different experiences from settlers and second- and third- generation immigrants. The future, for Canada, is in how we deliver equity for all kinds of communities. And sport is merely one bridge to cross.

Perry King is a Toronto-based author, communications strategist and freelance journalist. He has written about sports, business, urban issues and the future with the Toronto Star, Globe and Mail, BBC and, most recently, Spacing and West End Phoenix. Follow him on twitter at @kngprry.