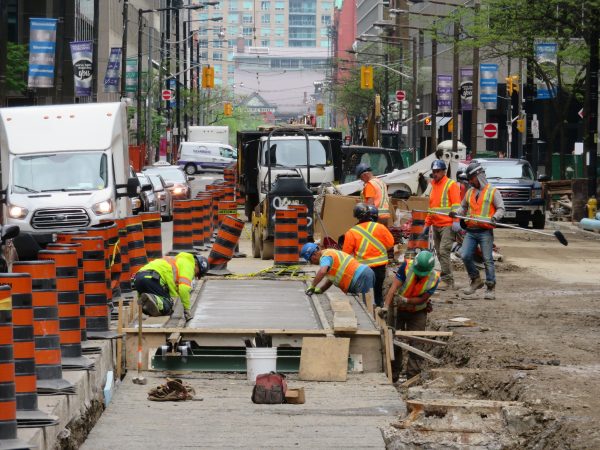 Nothing quite smells like an election coming ‘round the corner than large deposits of transit funding. The federal Liberals liberally strew many billions across Greater Toronto on Monday — for the Eglinton West LRT-subway thingy, for Yonge subway North, for that never ending soap opera called the Scarborough subway extension, for the Hamilton on-again-off-again LRT, and, finally, for the Ontario Line (formally, the Relief Line).

All in, a $12 billion-plus down-payment for your votes, as well as another half billion for streetcars for Mayor John Tory.

Three of the five lines are ridiculous, to my eye, although maybe at some point on the horizon — in 2121, for example — it will all seem prescient and forward-thinking. We won’t know.

Closer to our own era, those transit dollars should be regarded as a massive injection of as-yet-unrealized profit to the developers who are snagging the land near all the new subway and LRT stops and will aim to pile on the density, as per the Ontario Tories’ new-ish edict about transit-oriented development.

There will be a ton of land value uplift along those corridors — it’s happening already, of course — so the question is whether Toronto, Hamilton and York Region are able to capture some of that windfall and re-invest it in what the residents of this region need most of all — housing that won’t bankrupt the vast majority of households.

While the top-line messaging — courtesy of Prime Minister Justin Trudeau — focused on easing commute times (remember those?) and job creation, federal infrastructure minister Catherine McKenna insisted these investments are meant to deliver a social dividend. “Public transit is at the heart of an inclusive recovery,” McKenna said at the announcement, according to the CBC. “We pushed hard for better outcomes for residents in local communities.”

These are great sentiments, and it’s possible the federal-provincial agreement that lays out the terms and conditions includes some prescriptive language for translating the Liberals’ progressive rhetoric into actionable policy and land use planning.

But the wrinkle is that much of the finicky work associated with ensuring these transit investments actually make the region more inclusive lies with provincial and local governments, whose close ties to the development industry can undermine or dilute the high-level objectives that make for such appealing sound bites during funding announcements.

By way of proof, try to think about the last time you heard of an affordable housing apartment or a co-op being developed near a major transit node. There was a time, many decades ago, when such projects did get built, but it doesn’t happen any more, for all the obvious reasons.

The mega-project on an old school site at Dufferin and Bloor is as good an example as any. The Toronto District School Board sold off the land and a development consortia proposed a giant mixed-use project with the usual amenities, and virtually no affordable housing (a paltry 56 of 2,162 proposed units). A local YIMBY group began pushing for a better outcome and succeeded in shaming the developer and the City into negotiating a more progressive deal.

The builder eventually anted up $17 million for a community land trust. The hitch is that the affordable housing will be off-site, meaning the developer continues to reap the profits associated with the location while the low-income residents of the new land trust units will be, well, elsewhere. It’s worth noting there’s a non-profit seniors tower across the street, built in another era.

In theory, inclusionary zoning — policies that require builders to set aside some proportion of units as affordable for a specified time period — is the most promising policy tool for ensuring that some of the transit-related density will go towards affordable rental or affordable ownership units. But Ontario’s inclusionary zoning legislation, which came into effect in 2018, is not terribly ambitious by international standards, and still provides all sorts of loopholes that allow developers to avoid hiving off some of their projects for lower-income tenants.

The law punts the implementation details to municipalities. In the City of Toronto’s case, the draft bylaw and official plan amendment released last fall envisions that inclusionary zoning conditions — 99-year affordability guarantees for both owned and rented units — will be required only in areas deemed to have “strong or moderate” market conditions.

According to this helpful map prepared by Urban Strategies, we can clearly see how the City has already side-stepped the “inclusive recovery” riders that McKenna claimed were hard fought wins in these recent transit funding negotiations. The Eglinton West LRT and the Yonge North line fall outside the zones where IZ will be mandated, as does the Finch West LRT, most of the Spadina subway expansion, the Sheppard subway, and the Sheppard LRT (if that ever gets built.

As the Urban Strategies assessment further points out, the policy will be that affordable units are meant to be provided “on site” in those areas where IZ applies, but the city nonetheless “maintains discretion to consider off-site locations.” In other words, lots of off-ramps.

The City of Richmond Hill, which will benefit hugely from the Yonge North subway, is even more discouraging on the subject of inclusionary zoning as a tool to build affordable housing. As a recent briefing note cautions, “Inclusionary Zoning policies can be a powerful tool for municipalities to require affordable housing. However, because the units are required to be developed by the private sector, the level of affordability that can be achieved through these measures is limited.”

The upshot is that while the three levels of government are piling money into rapid transit across the region, most of those new lines will traverse communities where the market conditions aren’t seen as robust enough to warrant inclusionary zoning, and this despite the fact that these are the very areas where the need for affordable housing is the most acute.

It is easy to conclude the benefits of all this transit capital will flow first to the builders and investors who secure the high-density locations in the vicinity of major transit stations, and, secondly, to the homeowners who have houses near the new nodes and can therefore expect a bump in their property values.

What’s difficult is for our governments to find ways of translating a very simple principle into policy, which is that the value created by the public spending on such projects shouldn’t only flow into private hands. There must be a public benefit beyond reduced car dependency and congestion. McKenna may say she wants this 11-figure investment to bring about an inclusive recovery, but there’s little here to indicate that those dollars will bring us any closer to that lofty goal.