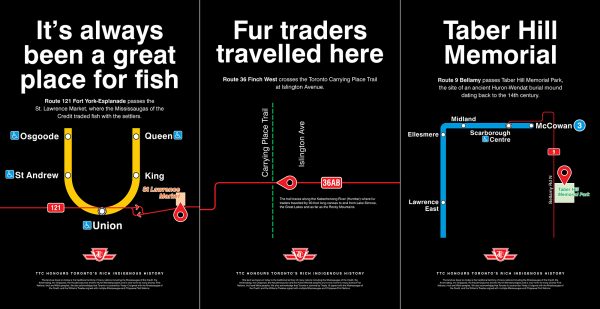 June has begun, marking the start of Indigenous History Month. The recent discovery of an unmarked grave of 215 Indigenous children at a Kamloops, B.C. residential school reminds us once again of the importance of recognizing Indigenous stories and history, and how much Canada has to atone for. The TTC is one institution hoping to better its relations with the Indigenous community, and is using their latest campaign as just one step towards that goal.

Starting today, the TTC is launching an Indigenous History Month campaign which includes posters and streetcar wraps commemorating Toronto’s Indigenous past and present.

Much like the TTC’s recent Black History Month campaign, this project will see posters within the buses, trains, and stations of the TTC, providing stories of Indigenous history within the Toronto area ranging from 10,000 years ago to recent times. The stories were selected with the help of local Indigenous artist and historian Phillip Cote as well as the Mississaugas of the Credit First Nation, whose members were the primary occupants of the area during European settlement. These posters pinpoint areas along and around TTC’s routes and provide more historical context and significance, most of which is not visibly apparent today.

One poster notes the “Jackes site, where a village once stood. The Route 61 Avenue Road North [bus] passes by Allenby Public School, which stands on the Jackes site, an ancient Huron-Wendat village”  and marks the spot on the route map. There are eight posters in total, and together they cover a large area, all the way from the west end of the subway line at Kipling station to the east end at McCowan station and beyond. As many Indigenous nations have travelled and lived in this area for thousands of years, there is a lot to learn and the TTC’s campaign hopes to bring awareness of that presence and get Torontonians interested in learning more Indigenous history. 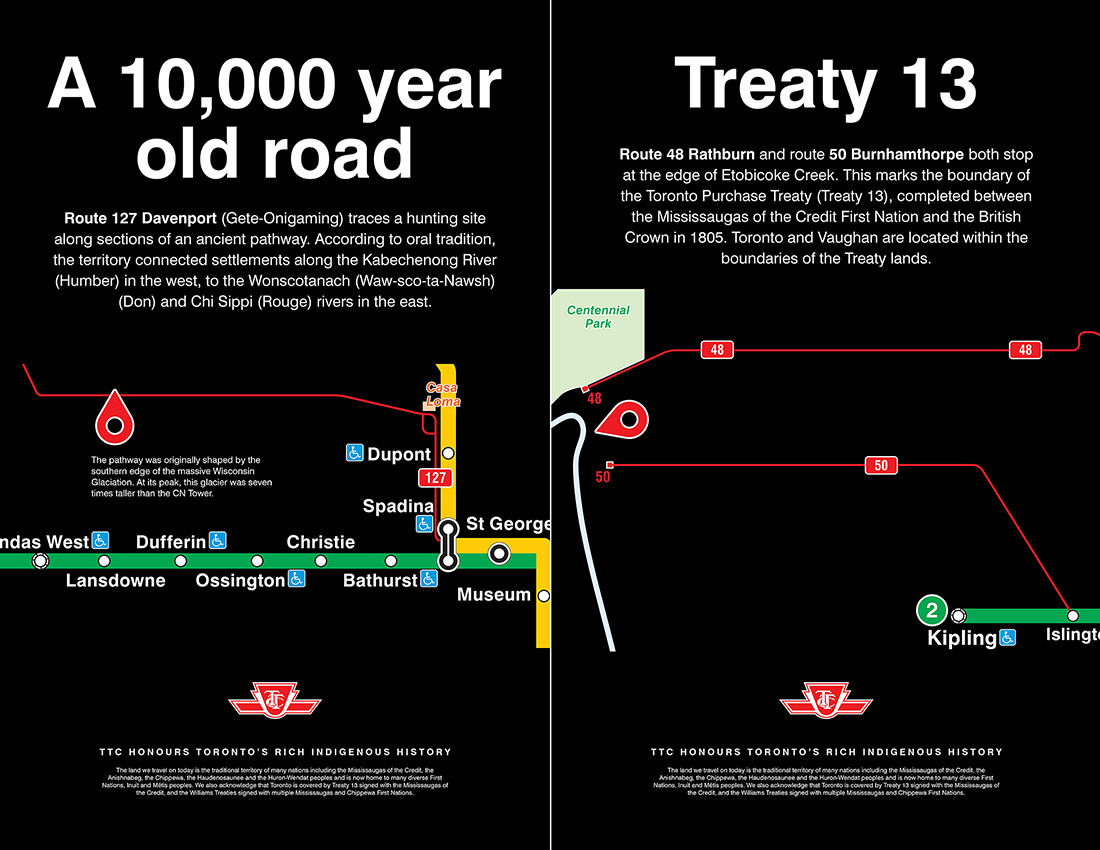 Aside from the posters within the TTC, there will also be five streetcars wrapped in a land acknowledgement alongside art by Cote who has created many murals depicting Indigenous history across the city. These streetcars will travel on some of Toronto’s most visible routes, giving even non-riders a reminder of Toronto’s Indigenous history. Having a land acknowledgement on streetcars moving across the land brings a new dimension to these words. Accompanying the text are illustrations of the Indigenous nations that traditionally occupied the area, and some of their traditional teachings that have been incorporated into the land acknowledgement. In such an urbanized city, Indigenous heritage often isn’t visible, and this initiative is just one step in the direction of amending that.

Both campaigns stem from the TTC’s 10-Point Action Plan on Diversity and Inclusion that was approved by the board in December, 2020. The plan recognizes that the TTC has a history of systemic racism and biases that need to be changed in order to become a safe and welcoming transit system for all of its riders and staff. Aside from these posters and streetcar wraps, the TTC also has a campaign for Indigenous employees to tell and share their stories, and will be featured in newsletters and on the station video screens.

The TTC says these projects are just some of the first steps to its Diversity and Inclusion Plan. Nor will the TTC’s mapping and land acknowledgment campaign be the only element of Indigenous History Month you will be seeing around the city. There’s lots more still to learn.