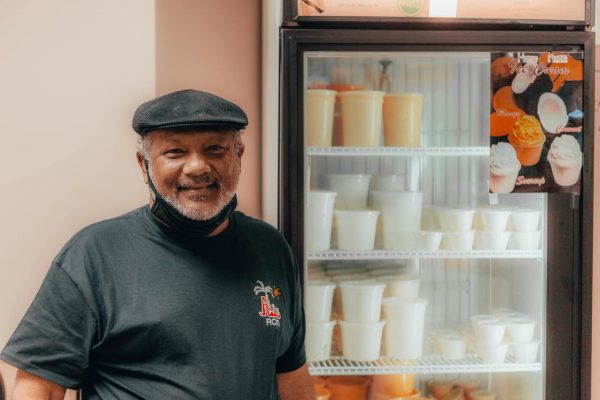 The first time I walked into Ali’s Roti in Parkdale, owner Shiraz Aligour, whom I had never before met, took one look at me and asked, “Which one of the Sigoolam girls is your mother?” “Sharma,” I answered. “The prettiest one,” he replied.

Ali’s has since been my local temple, community center, newsstand and respite from the city’s cold. No one in my family has ever visited me without a stop at Ali’s, and every one of my close friends has shared a meal with me there—their rotis are notoriously large enough to be split between two.

I introduced students in my “Indo-Caribbean in Canada” course to “phulorie,” “aloo pies” and “Mauby drink” at Ali’s, and I’m fairly certain the notoriety of that annual field trip kept the course consistently full over the decade that it was offered at York University.

For all the years that my then partner and I shared a home in Toronto, Sunday dinner was usually “Chataigne” (now sadly gone from the menu), Pumpkin and Paratha, “Trinidad’s croissant,” claimed my then love, who once tried to get Aligour to FedEx a box of rotis to France. (Aligour, ever the entrepreneur, was game).

Aligour landed in Parkdale when he migrated to Canada in 1972. “I lived at Westlodge, which was very popular and had a lot of Caribbean people,” he told me recently.

His first job was at Viceroy factory at Dupont and Dundas making rubber bands. “Near it was a school offering a welding licence, so I did that. But I was no welder.” He picked up a few temporary jobs, including one with CP Rail, but was so badly hurt at work in 1975 that he had to have major back surgery.

Opportunity struck while he was still recovering. “There was a little place called Dindial Roti Shop on Macdonnell Ave.,” he recalled.  “They ran it for a year, but they had some difficulties in the family, and wanted to sell.” Friendly with the Aligours, they agreed to sell the business to him, and provided training on their roti-making techniques. “We knew how to make roti, at home, of course, but they showed us how to make it commercially.”

Ali’s Roti opened shop on July 13, 1976. “That day was a blessing,” Ali says, “I had no education, where would I find a job?” The 200 sq.-ft. space on Macdonnell fit a very small kitchen with a four-burner 24-inch stove, a cash register, a small bathroom and an old yellow fridge with a small freezer. Aligour’s day began at 7 a.m. with the boiling and grinding of split peas to fill into the roti. They opened six days a week. He also became a mainstay on the Caribbean community cultural scene, setting up stalls at cricket games and Caribana events. “I would go set up a booth whenever I could.”

When he moved the business to its current location on Queen Street West, in 1985, the new space felt “like a football field.” Over the years, Ali expanded the menu from its original selection of four rotis – chicken, beef, goat and potato – to over 60 items that include Trini-Chinese cuisine, a range of snackable appetizers and creole desserts and its most popular item — the iconic curry chickpea Trinidadian street food “doubles,” alongside the Indo-Caribbean mainstays.

The menu has also evolved with the demographic changes in the area. “When we started,” he says, “the West Indians would come from all over to get roti, but the white people did not know what roti is…I used to pick one up and explain that ‘it’s round like a pizza, but not heavy like a pizza…’”

These days, reflecting the changed population in Parkdale, most of his passionate clientele are not West Indians. Boneless chicken rotis became much more popular over the more flavorful bone-in style favoured by West Indians, and parathas became preferred over dal puris. “The South Asians and others familiar with South Asian cuisine wanted a plated meal,” he says, instead of the traditional, parcelled roti that is ubiquitous throughout the Caribbean (though both remain best sellers).

Aligour confirms that the attempts to rebrand Parkdale as Vegandale is fed by demand. “When we started, everyone just wanted meat,” he says. But now, the vegetarian and vegan dishes that are a mainstay of Indo-Caribbean households , like steam/fried pumpkin and spinach, are very popular.

Aligour recently turned 68, but still puts in full days at the shop. Technological developments, like the mechanical roti maker, have lessened the labour burden. But running a restaurant is, of course, a full time commitment. He has spent all 50 years of his life in Canada in Parkdale, and has never thought about living elsewhere. He’s made home here. I ask Aligour if either of his children have any plans to continue the business. “They’d like to, but they realize it’s a lot of hard work. A lot of hard work.”

Andil Gosine is Professor of Environmental Arts and Justice at York University, and author of Nature’s Wild: Love, Sex and Law in the Caribbean (Duke University Press, 2021). For more details, follow IG @natureswildbook.