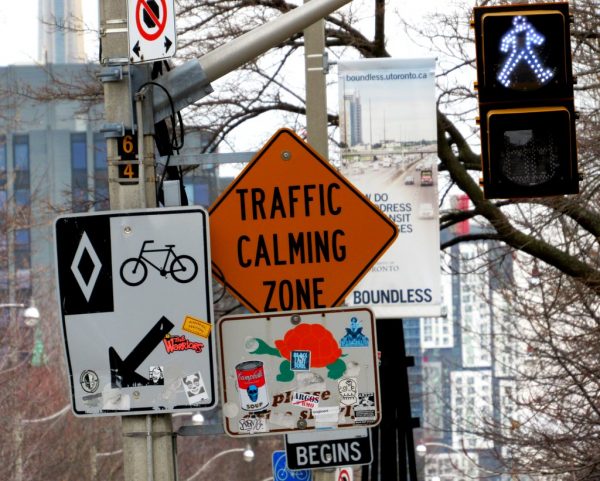 Make-believe is a beautiful thing when you’re defending a car-dominated transportation system amidst a disturbing road casualty toll, poor public health, and a climate crisis.

In the past decade, over 4,000 people in Toronto have been killed or seriously injured in road crashes, while sedentary lifestyles from car dependency contribute to obesity, diabetes, and heart disease. At the same time, transportation accounts for 38% of Toronto’s GHG emissions, almost all of it from automobiles.

The power, weight and speed of cars make them inherently dangerous, but we’ve long been made to believe that roads can be shared safely, even harmoniously, if only motorists, cyclists, and pedestrians obeyed the law and acted with care and courtesy. Generations of politicians have repeated exhortations to polite behaviour — likely succeeding only in diverting attention from the underlying problem.

Small mistakes in everyday activities don’t usually cause grievous harm, but the power, speed, and weight of cars — despite massive spending over the last century on vehicle safety, road engineering, and education — means that death and injury remain common. Of course, pedestrians and cyclists make mistakes too, but their errors don’t put someone in the morgue.

When cars first arrived on Toronto streets, the danger was quickly apparent, but the casualty toll remained low while cars were few and they were limited in speed, power, and weight. After a car ran over a cyclist on Bay Street in June 1902, the victim got up, dusted himself off, and agreed with the motorist that the poor condition of the road was to blame. At the time, a car, with tires little bigger than a bicycle’s, weighed about the same as a horse. Over the ensuing decades the motor industry added, and promoted, power and speed, while vehicles gained weight. (The first Ford Model T in 1908 had a bit over 20hp, while the latest Ford F-150 weighs almost 5,000 pounds with 400hp.)

By the 1920s, the road carnage provoked public outrage. The driver’s licence, introduced in 1927, was supposed quell the anger, but the casualty toll only worsened. Many people were nonetheless so excited about driving, and others so excited about the profits, that make-believe was preferable to curtailing the number cars. The motor lobby insisted cars were safe, provided drivers were careful and competent and pedestrians obeyed road rules — a theory that worked well until a careful, competent motorist accidentally ran over a law-abiding pedestrian.

Today, Toronto’s (poorly funded) Vision Zero road safety approach implicitly accepts that cars are inherently dangerous and instead of relying on make-believe, treats mistakes as common and predictable. Good road design, including the separation of people on foot or bikes from people driving cars, is a key part of the solution. Carmakers have themselves admitted the underlying problem (albeit after 300,000 road deaths in Canada over the last century) by promising to replace fallible motorists with “infallible” computers in driverless cars. Meanwhile, the industry hypes ever-bigger, more powerful pick-ups as passenger cars.

Make-believe also links cars to nature and sport. (Advertisers now even sneak bicycles into car ads.) In practice, cars promote physical inactivity — a problem that would be worsened by driverless cars — while fouling nature on the drive to nature. The real solution, a goal city policy at least talks about, is to convert the hundreds of thousands of short trips (under five km) travelled daily by car in the city to walking and cycling.

In the make-believe world, the car is a necessity, which allows many planners and politicians to resist changes that adversely affect “traffic” on roads. Thirty percent of Toronto households nonetheless manage to get around without owning a car, even while their transit journeys are routinely blocked by cars. A measurement of traffic volume by all modes along the Bloor corridor in October 2019 showed 267,000 daily trips, among which there were only 17,000 cars. Politicians nonetheless claimed that a proposed bike lane in the same stretch would prevent people from going downtown.

Make-believe even allows for car use to be maintained and perpetuated during this climate crisis, sometimes by pointing to fancy technologies like driverless cars. We’ve already seen one tech solution, ride-hailing services, actually increase motor traffic, while poaching patrons from cleaner mass transit. In reality, our problems are the result of poor choices among available technologies. Toronto’s first electric car was built in the 1890s, at a time when residents already relied on electric streetcars for local travel and electric “radials” to reach the suburbs and beyond.

Even if electric cars eventually dominate the Western market — and assuming the transition (including the replacement of Toronto’s 1.3 million cars and trucks with electric models) can be done within a timeline consistent with the urgency of the crisis — GHG emissions, including from automobile production, might simply rise as gas-powered and second-hand cars flood developing countries.

Yes, make-believe is comforting, but it’s time to put our childish fantasies behind us. Fortunately, seriously reducing private car use by investing in transit, walking, and cycling not only addresses the road casualty toll, poor public health, and the climate crisis but aligns with civic goals of improving affordability, equity, and the liveability of our neighbourhoods.