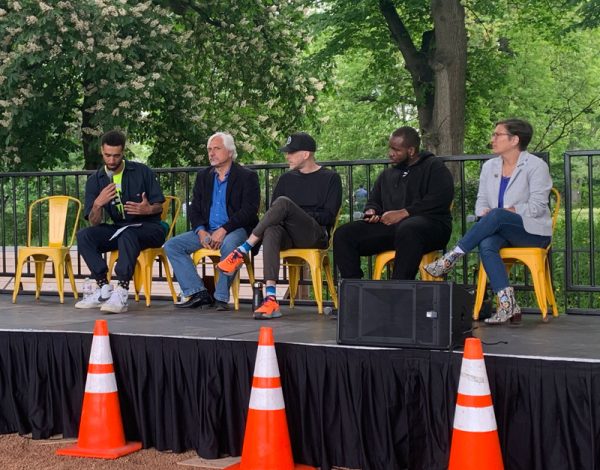 Tucked under The Bentway by the Strachan Gate, the Bentway hosted its STREET series summit kick-off weekend on May 27-28.

The Bentway is an organization “dedicated to the creation of shared and inclusive spaces.” One of its roles is to animate the Bentway, the public space under the Gardiner Expressway that stretches almost two kilometres from Liberty Village to Spadina Ave.

The summit will be a summer-long affair with various performances, discussions, and workshops on redefining Toronto.

Walking into the kick-off weekend, visitors were greeted by the friendly, smiling faces of volunteers. Vendors welcome them with the smells of vegan Caribbean food and a fancy frank stand.

Right in the middle of the festivities was a stage only a few feet off the ground for open discussions, as the organization puts it, “of the city; about the city; for the city.”

Between talks and workshops, summit-goers were welcome to engage by putting a pin on a map of their favourite places in Toronto or answering fun questions such as: do you smile at a passerby or avoid eye contact?

The “Dream Streets Panel” on May 27 was a visionary discussion about how to create a better Toronto. The panel discussed how to add more green spaces, how to build better bike culture, and how to develop public ownership of the city.

Dane Gardener-Williams from Black Urbanism TO, Adam Nicklin from Public Work, Brian porter from Two Row Architect, and Alison Stewart from Cycle Toronto joined moderator Sam Carter-Shamai from The Bentway to reimagine the streets of Toronto in the future.

The city needs to change its way of thinking, said Nicklin. “Practicality is seen as a limiting proposition. There’s a reason all the streets look the same because practically has made it so. If we do it the way we always do it, the results will be the same.”

He reminded the audience about the location where they stood; the Bentway project didn’t happen overnight, Nicklin said – it is a helpful reminder of what good can be done in the city.

We can do better and build a city that works for everyone, said Porter.

“Start with values, sustainability stewardship, and community ownership to make those values part of the core decision-making,” he said.

“Nobody called me to invest in the 407 when they built it; I don’t understand why we don’t get the opportunity to invest in our own infrastructure and reap the benefits locally,” he added.

Williams-Gardner said that community shared ownership is the only way to get true community involvement and democracy.

“Is the consultation with the community in the initial conversation existing to understand the neighbourhood’s needs?” asked Gardner-Williams, referring to transit infrastructure projects. “Existing communities need to be seen by developers as a key cog [for] existing business owners to be able to receive the fruits of the labour that transit is going to bring.”

Community investment and ownership would be a gamechanger for the overall sense and dignity of the community.

A successful weekend of learning and getting to know the city was capped off by international keynote speaker Michael Ford on hip-hop architecture and the Toronto Society of Architects’ talk on closing the gap between the city we have and the city we desire.

Watch out for future summit series events along The Bentway this summer.