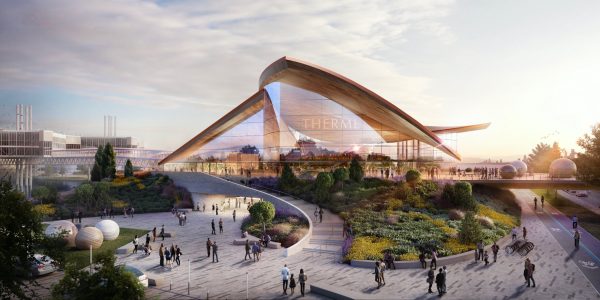 The only thing worse than the design proposed for Ontario Place’s indoor spa mega-project is the fact that a firm with such a storied history in Toronto urbanism would be willing to put its name to this terrible idea. Diamond Schmitt Architects Inc. (DSAI), the local partner retained by Austria’s Therme Group, which last year won the RFP to re-develop the site, has produced a design that’s not merely ridiculous, but profoundly and destructively anti-urban. They should be ashamed.

The whole fiasco landed last week on the agenda of Waterfront Toronto’s Design Review Panel, which must weigh in with recommendations about the so-called public realm master plan and then offer up a verdict by early next year. More public consultations are also planned for the coming months. The development application will be filed with the City in October, and this pathetic idea will find its way to the next council in the fall of 2023.

Make no mistake: the future of Ontario Place must become an election issue this fall, and it presents an opportunity for whomever is the next mayor to create either a strong built-form legacy or an epic failure that serves as a rebuke to more than a quarter of a century of civic-minded waterfront revitalization. I’ll talk about a possible solution more in a moment.

Let’s begin with DSAI’s concept plan for the spa, which will absorb a large chunk of the site, as my colleague Alex Bozikovic noted in an excellent thread on Saturday. The bird’s eye view rendering shows what appears to be two giant pinwheel-shaped structures topped by copper-coloured cladding. Of course, the reality of this massing will be experienced at grade, where it will overwhelm what’s left of Eb Zeidler’s airy original structure, as well as the pedestrians who dare to approach. The effect is this thing, as well as the expanded Live Nation concert venue, is to create a pair of looming, glacier-sized hulks blocking access to, and views of, the waterfront. They will look like a couple of beached whales.

We’ve made this mistake before, and one would hope, perhaps in vain, that we have learned something. 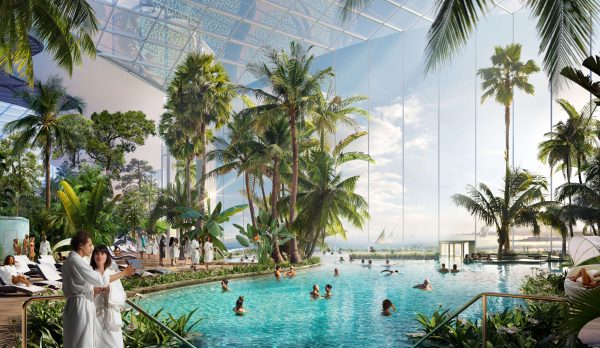 The notion that Therme’s spa will be a transparent structure is just fantasy. We got sucked into that particular bait-and-switch a almost generation ago with Daniel Libeskind’s renderings for the ROM “Crystal,” a fanciful selling point that seduced the museum’s board but then succumbed to the twin forces of value engineering and the elements.

It’s pure fiction to think one could build and then heat or cool a massive glass-enclosed structure on a waterfront that is frigid and windswept for six months of the year. The cost, economically and ecologically, is ruinous. In its built-out form, this spa, like other Therme projects, will be far more opaque than promise. I guarantee that the glass curtain walls that survive the value engineering won’t be facing the city; rather, we’ll get to stare at the ass of this thing for time immemorial.  As the old saying goes, ‘fool me once, shame on you…’ etc.

The report that went to Waterfront Toronto’s DRP raises all the predictable issues around the urban design plan for what’s left of the site — a narrow ribbon of walkways around the edges, the marina, and a chunk of paved land on the east side that served as a drive-in theatre during the pandemic. The latter could become, as Urban Strategy Inc.’s draft public space plan notes, an “interim programming and event zone.” I wonder what that placeholder word “interim” implies.

This planning exercise, backed jointly by Infrastructure Ontario and the Therme Group’s local advisors, among them Urban Strategies (USI), is attempting to make a silk purse out of this sow’s ear. Zeidler’s iconic pods will likely be retained and gussied up. There’s a little beach. The Trillium Park, a terrific space dedicated by former Premier William Davis, remains as is. But so do the parking lots on the south side of Lakeshore. Because, you know, tourists.

In the main, Ontario Place will become far more private, exclusive, impermeable and inaccessible than it was in the years leading up to its demise. The new form will evoke none of the optimistic civic spirit that animated the original concept, which used, lest we forget, public funds to create a public space.

It’s critical that the members of Waterfront Toronto’s DRP give this indefensible scheme an unambiguous thumb’s down, and take a stand against an undertaking that runs dramatically counter to the principles that informed the creation of Waterfront Toronto way back in 2002. The DRP’s chair, Paul Bedford, knows those principles intimately because he helped draft them, and the waterfront secondary plan that followed. They turned on fundamental urban design goals, like accessibility, north-south view corridors, and the creation of a truly public water’s edge.

Another member of the DRP, architect George Baird, drafted some of Toronto’s earliest and most important view corridor protection bylaws, back in the 1970s. A third, Eric Turcotte, is a veteran partner at USI, whose founder, Joe Berridge, was  instrumental in making the case for a waterfront development agency in the late 1990s.

Not that anyone involved should need to be reminded of the pre-history, but Waterfront Toronto exists specifically because of a chain of events set in motion by several view-destroying private development deals along Queen’s Quay West that were approved in secret by Toronto council in the mid-1980s. That debacle led to David Crombie’s royal commission on the waterfront, the renewed awareness of the intimate ecological relationship between the region and Lake Ontario, and a sturdy consensus that development shouldn’t privatize the lakefront.

Have we forgotten? Seems so.

In the years since, various actors have waded in to waterfront politics to defend the publicness of this vast space. The Ontario Municipal Board quashed a big box development proposal, complete with acres of parking, on a strategically vital parcel at the foot of Cherry Street. Later, city council, encouraged by thousands of citizens, pushed back hard against the Ford brothers’ grotesque 2012 scheme to turn the Port Lands into a vast shopping mall.

In 2018, Torontonians again balked at Google/Sidewalk Labs’ plan to create a quasi-private, heavily-surveilled neighbourhood at Quayside — a plan that was actually set in motion by Waterfront Toronto, and which went, well, sideways early in the pandemic. (For further details, see Josh O’Kane‘s forthcoming book of the same title.)

So here we are again. 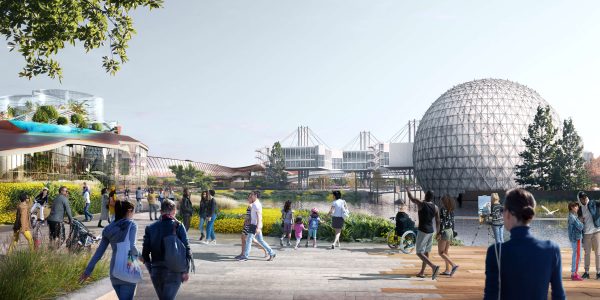 One of the two leading candidates for mayor — incumbent John Tory and 8-80 Cities founder Gil Penalosa — will eventually have to cast a vote on the Therme scheme, and they’ll be able to do so equipped with the strong mayor powers promised by the Ford government.

Tory’s fingerprints are all over this file. The year Ontario Place closed, 2012, he was appointed by the then Liberal government to head a task force mandated to come up with ideas to revitalize the park. For much of his term as mayor, however, Tory didn’t do much about advocating for Ontario Place besides urging the province to work with the city, whatever that means. He opted instead to spend a bunch of his political capital on the $1.7 billion Rail Deck Park proposal that was eventually killed off through an appeal to the provincial land use tribunal.

More recently, he’s pledged his support to a long-odds plan to turn University Ave. south of College Street into a park.  A cool idea, to be sure, but it’s almost impossible to imagine that the City, when push comes to shove, would do anything more ambitious than widen the median. Just look at what happened with ActiveTO and the Blue Jays.

Penalosa, for his part, came to Toronto over a decade ago after serving as the parks commissioner in Bogota, Colombia, so he knows a thing or two about public space. As the head of 8-80 Cities, he’s advocated for urban spaces that are open, accessible — place where, according to the group’s mission statement, “all people have the right to safe and active mobility, welcoming and accessible public spaces, and inclusive city-building processes.” Therme fails on all counts.

I’d like to see both of these men acknowledge the fatal flaw in the Ontario Place revitalization strategy, which is that any solution must necessarily generate revenue and include “attractions.”

Why? There is surely an overwhelming amount of evidence to show that public space is its own reward — a means of improving urban quality of life for all. We don’t expect High Park, Corktown Common or Trinity Bellwoods to generate cash flow. Tommy Thompson Park for decades has alchemized naturalized public space from construction debris, creating a unique, popular and eminently sustainable waterfront park. There are no municipal accountants trying to match the Leslie Street Spit’s operating expenses to its revenues.

During the pandemic, many Torontonians rediscovered Ontario Place, in all seasons, as an unprogrammed park where they could be outside, near the water, in the water, among the trees, and so on. Amidst the interesting dereliction of some of the older pavilions, nature is busy reclaiming parts of Ontario Place, as Francesca Bouaoun reported here last summer. I have no idea why, in the midst of a declared climate crisis, anyone would want to interrupt that wondrous process.

In short, the transformation of Ontario Place into a city park is a once-in-a-lifetime solution to a pressing public space crisis afflicting the rapidly intensifying downtown core. The answer is staring us in the eye.

What I’d like to see is the next mayor of Toronto use his or her new powers to halt this absurd process and propose a land-swap to the province: the Ontario Place islands in exchange for its parking lots and the parking lots across Lakeshore Blvd., on the Exhibition Grounds. Put Therme, with its promise of jobs and tourist dollars, up there, grandfather the amphitheatre, and then let the rest of Ontario Place evolve into the waterfront green space that it wants to become.

The next mayor must say, ‘no, not good enough for this city.’

We’ve arrived at a future-defining decision. We now need to elect someone with the vision and the courage to send the spa hucksters packing.