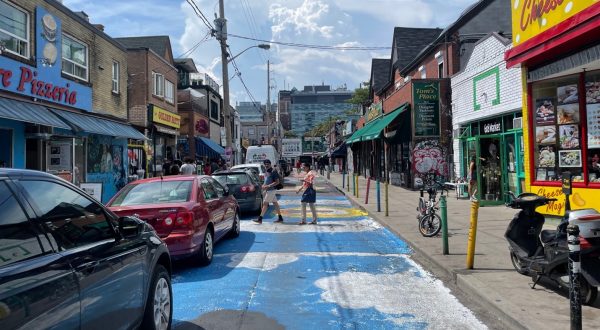 Kensington Market is one of Toronto’s most charismatic and iconic neighbourhoods, distinguished for its cultural impact. Putting your finger on what makes Kensington special is tricky – it’s chaotic and it’s messy, a quality emphasized when contrasted with the order and logic you’ll find elsewhere in Toronto. Kensington’s chaos takes a lot of forms, such as its idiosyncratic block pattern and impromptu commercial façade additions, its explosive mix of uses, and its colourful appropriation by locals, artists, street performers, vendors, and visitors. Kensington affords a different kind of existence in the city – sidewalks are suggestions, streets are canvasses, cars are planters, and utility poles are for human sized spider webs – it’s a way of life tuned to the streets of Kensington. It holds a special place in many hearts, including mine.

In 2021 the City of Toronto launched its Kensington Safe Streets project for enhancing the retail-fronting streets in the Market. This project is one of several initiatives by the City to implement its Vision Zero Road Safety Plan. Necessary state-of-good-repair work is already scheduled for 2022 with basic infrastructure upgrades to watermains and sewers. Road reconstruction and resurfacing that also includes streetscape and safety improvements will follow once a preferred design is selected.

In July, the City presented its preliminary design concepts at a virtual public meeting. Overall, the most noticeable change will come in the form of street resurfacing from asphalt to concrete pavers on Augusta and Kensington Avenues and on Baldwin Street. There are several positive improvements that are proposed in the plans, including more street trees, bespoke lighting fixtures, curb bump-outs and raised crosswalks to improve the pedestrian experience and, in some cases, expanded sidewalks for pedestrians. But overall, the plans tend toward being decorative and generally propose a status quo style of street reconstruction, with a defined curb and roadway. Augusta Avenue alone is being considered for widened sidewalks on both sides of the street, but several design options were presented for Baldwin Street. The City has been clear that full pedestrianization of the Market was not under consideration due to accessibility needs for residents and businesses. 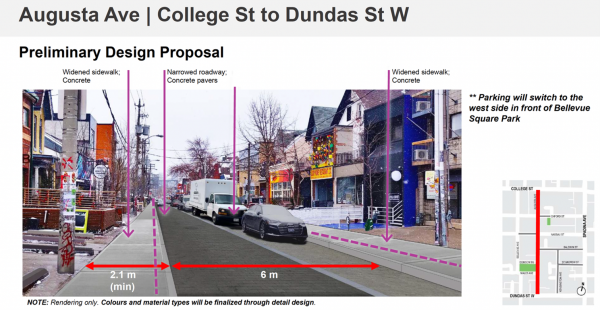 One thing is clear, and that is Kensington’s streets need some TLC. The road conditions are so rough that this summer a sinkhole appeared on Augusta Avenue and the street had to be temporarily closed. Not only are the streets bumpy, but they’re also crowded. It’s common to find yourself standing in a queue to walk down the street until pedestrians start spilling over the sidewalk and into the roadway, which is fine if you’re able-bodied but a headache if you’re not.

The City is setting the right priorities by making street upgrades in Kensington. However, are the proposed changes balanced too far in the direction of vehicle movement rather than liberating the streets to the free flow of foot traffic, informal vendors, street patios, and the vibrancy that makes it a top destination for both locals and tourists? More importantly, is the City missing an opportunity to deliver a made-for-Kensington design?

Kensington isn’t conventional, so why should the streets be?

In the age of the automobile, we have grown familiar with the design of a conventional street with sidewalks for pedestrians, roadways for vehicles, and curbs to separate the two. In Kensington, this convention has been thrown out the window. The bustle of activity in the Market is self-regulating by forcing road users to proceed gingerly in an unspoken negotiation that is essential to the experience while proving to also be effective for road safety. The City’s own Vision Zero Mapping Tool, which aggregates recorded collisions in the City since 2008, doesn’t report a single incident within the Kensington Safe Streets study area.

The City has demonstrated it can implement non-conventional streets, such as mixed-use shared streets. These streets allow vehicles but have curbless access to provide flexibility for foot traffic while maintaining protected pedestrian areas that are separated by bollards. Movable bollards could provide added flexibility in summer months for CaféTO street patios. When the idea of a shared street was presented to the public in 2021, 89% of survey respondents said they supported or strongly supported the idea in Kensington Market. Unfortunately, the City has identified a single segment of Baldwin Street as a potential option for this type of intervention, favouring a more conventional street design everywhere else. 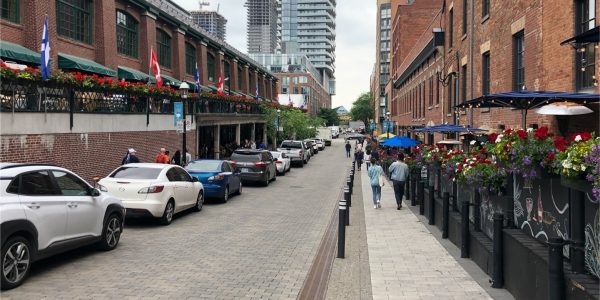 Market Street at the St. Lawrence Market is an example of a curbless shared street. (Image source: Stephen Brophy)

Does Kensington need to be a parking lot?

The central draw to Kensington is its businesses and vendors, who set the stage for what makes the Market famous. Logistically, businesses need to coordinate truck deliveries from suppliers, and they benefit from designated loading areas, which the City aims to address in select zones. At the same time, businesses, residents, and visitors also benefit from vehicle access to the Market for deliveries and passenger pick-up and drop-off areas. Vehicle access makes sense, but on-street parking is less defensible. Today, parked cars overwhelm and choke the Market’s streets.

The City notes on its project website that during the first phase of public consultation “a majority of survey respondents indicated that amenities such as public space, bike parking and planting should be prioritized over on-street parking spaces.” Nevertheless, the City has prioritized on-street parking throughout the Market with a status quo approach while indicating an inadequate supply of permit parking for local residents. Despite this, most of the on-street parking to be retained is metered parking managed by the Toronto Parking Authority, in contrast to permit parking available exclusively to residents.

Kensington is colourful, but can it stay colourful?

Will a facelift with grey concrete pavers risk sanitizing the Market and de-saturating its colourful nature? While few will miss the potholes, it’s what today’s degraded streetscape affords, which is appropriation by the community and the ‘acceptable’ defacing of public property. How will opportunities for creativity and self-expression be afforded when you rip out the cracked asphalt? Will the City be prepared to have their concrete pavers painted by street artists or otherwise graffitied? Kensington’s streets should anticipate how that same colourful flavour will be possible in the future. 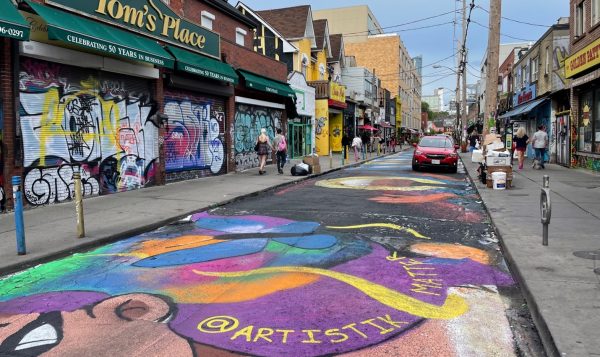 Is Kensington missing its big opportunity?

The City’s website states that its top priority is to “improve road safety without significantly changing the character of the neighbourhood.” It’s unclear whether their preliminary design succeeds in doing that, or whether this initiative is a missed opportunity for a once in a generation investment that could celebrate the Market with a made-in-Kensington streetscape design.

The final design should reflect the Market’s colourful past and present, rather than a standard street beautification that is copy-pasted from somewhere else. The Market is an explosion of flavours and colours, and its streets need to reflect that. More creative solutions than what’s been proposed are essential if the City wishes to genuinely prioritize pedestrians and cyclists. If any neighbourhood needs creative solutions, it’s Kensington.