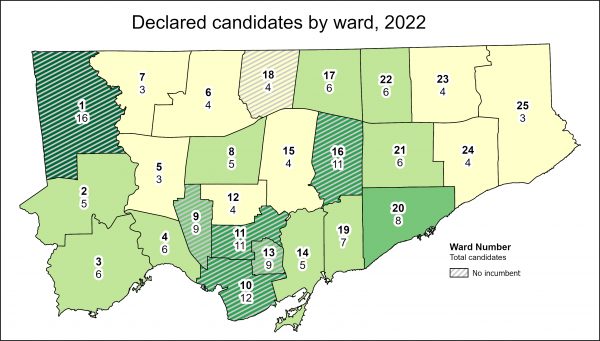 As part of Spacing Toronto’s coverage of the 2022 municipal election, cartographer Sean Marshall is creating maps revealing some of the underlying patterns shaping the election.

On Friday, August 19 at 2:00 PM, the last nominations were accepted at City Hall for mayoral, council, and school board candidates for the municipal election to be held on Monday, October 24. Though he initially promised to run for only two terms as mayor, John Tory will be seeking an unprecedented third term, but he will up against 30 opponents, including leading urbanist Gil Peñalosa. Another 168 candidates are running in the city’s 25 wards. With seven wards without an incumbent — 28 percent of council — there may be a shake-up coming to City Hall, bringing a greater diversity of ideas, lived experiences, and representation. Or Toronto may end up with another four years much like the last eight.

As the map above illustrates, the 168 candidates running for one of 25 ward councillor positions are unevenly distributed across the city, with open seats being the most attractive to challengers (with one notable exception). In Ward 1 Etobicoke North, there are 16 people looking to succeed Michael Ford, who successfully ran for his uncle Doug Ford’s Progressive Conservative party in York South-Weston. With long-time councillor and Tory ally Denzil Minnan-Wong departing after 28 years in municipal politics, 11 candidates will be running in Ward 16 Don Valley East.

With four downtown councillors retiring or elected to provincial government, there will be tough competition in those wards. Twelve candidates are running in Joe Cressy’s old seat in Ward 10 Spadina-Fort York, while 11 are looking to replace Mike Layton in Ward 11 University-Rosedale. Both retired earlier in 2022, largely due to the increased workload caused by Doug Ford’s controversial move to cut city council nearly in half. In neighbouring Ward 9 Davenport and Ward 13 Toronto Centre, there are nine candidates each looking to fill seats left by Ana Bailão (who is also retiring) and Kristyn Wong-Tam (who now represents Toronto Centre as a NDP MPP).

The one exception to the rush for open seats is Ward 18 Willowdale, where only four people will be running to replace John Filion, . They include Markus O’Brien Fehr, Fillion’s executive assistant, and Lily Cheng, who ran against Filion in 2018. Though Filion originally planned to retire in 2018, the sudden provincial interference caused him to run again. (He previously endorsed O’Brien Fehr’s and Cheng’s candidacies in the smaller wards).

The power of incumbency in a first-past-the-post electoral system (Doug Ford’s government outlawed municipal ranked ballots) deters challengers elsewhere, with only three to six candidates in all other wards but one. In Ward 20 Scarborough-Southwest, veteran conservative councillor Gary Crawford is running against seven challengers, including cycling and democratic reform advocate Kevin Rupasinghe and former Liberal MPP and past city councillor Lorenzo Berardinetti. With at least three strong candidates, it will be one to watch.

Despite all the advantages that incumbency offers, there are some interesting races to watch where long-time councillors are up against strong competitors, besides Ward 20. In Ward 3, Amber Morley is running for a second time against Mark Grimes, who has represented the area at City Hall since 2003.  Siri Argell, who previously worked in Mayor Tory’s office, is going up against progressive Gord Perks in Ward 4 Parkdale-High Park. In Ward 5 York-South Weston, social activist Chiara Padovani is running against Frances Nunziata for a second time, with only one other candidate in that ward.

A deciding factor in some of these races may be endorsements from other sitting politicians, including Mayor Tory. In 2018, he campaigned and robocalled for Mark Grimes and political newcomer Brad Bradford, helping them beat out Amber Morley and Matthew Kellway respectively. Already, Tory has endorsed five candidates, including former police officer and defeated councillor Jon Burnside, who is looking to return to council in Ward 16. Despite the mayor’s inaction on parks maintenance, the violent clearing of park encampments (which Burnside helped to direct), and the continuing housing crisis, he remains popular among many Torontonians, especially suburban homeowners. Council hopefuls will be buoyed or let down by his picks.

There are still eight weeks until election day. A lot can happen between now and then. But the power of incumbency, and the mayor’s own influence, will weigh heavy on the final results. Though there may be seven “open” wards and a few more truly-competitive races, there is a lot happening behind the scenes to favour certain candidates. 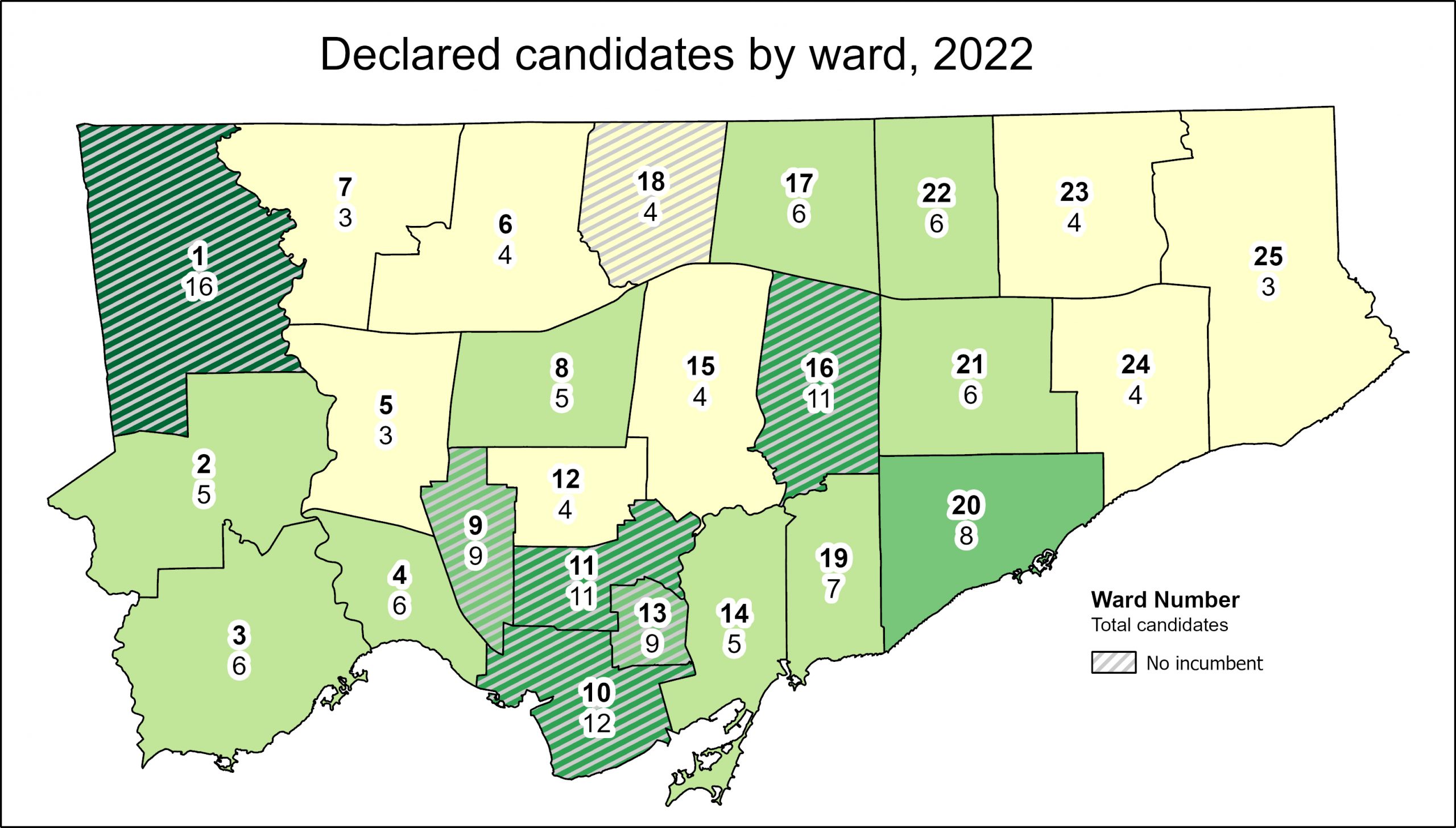