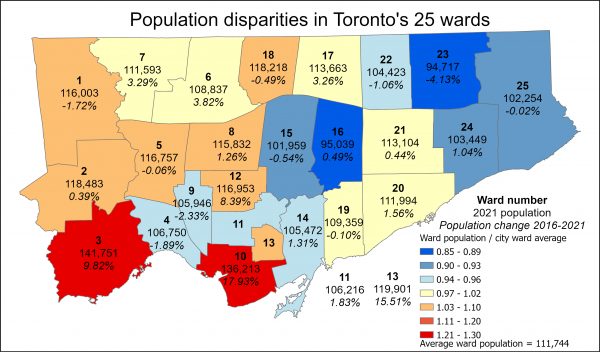 In July 2018, in the middle of Toronto’s last municipal election, the newly elected Progressive Conservative provincial government, headed by former Toronto city councillor and mayoral candidate Doug Ford, unexpectedly and unilaterally upended local politics. The new 47-ward council that was to be elected that October, using new ward boundaries designed to reflect the city’s uneven growth, would be replaced with just 25 wards, based on the same boundaries decided by a federal electoral boundary commission back in 2013. (A previous PC government led by Mike Harris cut the size of the legislature to match federal boundaries ahead of the 1999 provincial election, though future governments tweaked the formula to provide Northern Ontario with two additional seats).

Not only did the Ford PCs cut council’s size nearly in half, it also ensured that rapidly growing parts of the city would be underrepresented at City Hall and that councillors representing those areas would be overwhelmed with planning applications and citizen requests for infrastructure and city services. According to the 2021 Census, Ward 3, Etobicoke-Lakeshore, had the largest population among Toronto’s 25 wards, with 141,751 constituents, driven by condo booms in the Humber Bay Shores, Queensway, and Kipling-Dundas neighbourhoods. Toronto’s least populated area, Ward 23 Scarborough North, had 37,000 fewer residents, with a 4.13% population decline over the last five years. Ward 10, which includes the Harbourfront, CityPlace, Liberty Village, and Entertainment District neighbourhoods, also saw huge population growth. The map above (click here for the full-sized map) illustrates the disparities caused by boundaries formed using what is now 12-year-old population data.

The ensuing burnout caused by these disparities certainly contributed to a few councillors’ decisions to retire in 2022.

In 2023, there will be another redistribution of seats based on population changes throughout the country. Under the new formula, Ontario is allocated one additional seat in the House of Commons, while Alberta and British Columbia will be allocated three more because of greater population growth in those two provinces. Though Toronto’s population grew in the last ten years, it actually loses a seat, as population growth in the 905 suburban regions and in Southwestern Ontario outpaced Toronto’s growth rate.

With Doug Ford’s PCs re-elected with another majority government, it is fair to expect that Toronto will once again be forced to conform to the new federal and provincial electoral district boundaries in the next election, to be held in October 2026. The map below illustrates what these new recommended boundaries look like.

Though the federal electoral commissions (which are non-partisan, unlike the American practice where state politicians decide their electoral boundaries, usually to the detriment to their political opponents) do their best to ensure that each electoral district has similar populations, with deference to natural boundaries such as rivers and major transportation corridors, like Highway 401, there are still some disparities in the proposed new districts. The proposed Humber ward will be the largest, with 122,200 residents counted in 2021. Scarborough Southwest and rapidly growing Toronto Centre are also significantly above the city average. Scarborough Northwest will have the smallest population — 109,568 — in an area seeing little new growth.

As the federal redistribution process — a system based on retrospective growth — is unsuited to a rapidly changing major city, Torontonians should be able to decide how best to govern their own city. Until then, this is what Toronto’s political future will look like. 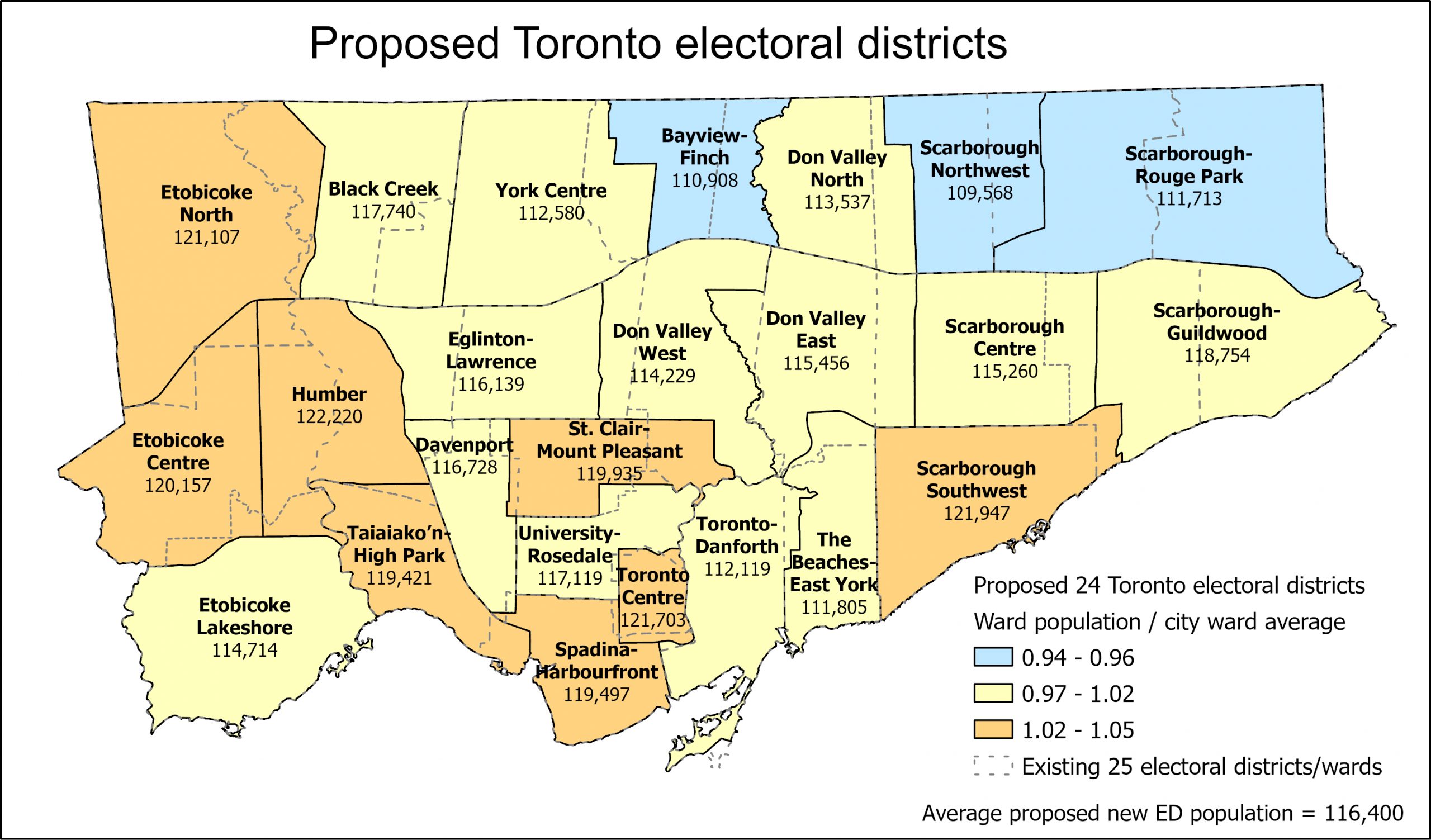 Maps updated to correct legend labels to ward population/city ward average. Thank you to “Math aficionado” for the catch.