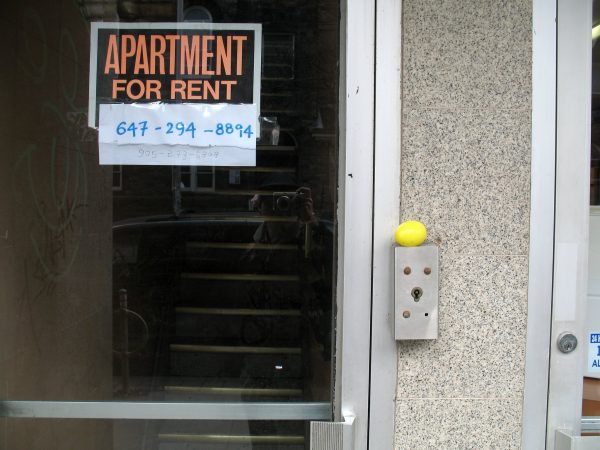 In the late 1990s, then St. Paul’s West councillor Joe Mihevc took up the cause of several hundred tenants, many of them seniors, living in two apartment buildings on Tweedsmuir Ave., overlooking the St. Clair West subway station. The buildings, 12-storey slab towers designed by Peter Dickinson with a total of 246 units (146 of them affordable), were to be demolished and redeveloped, a move made possible by the anti-tenant agenda of the Mike Harris government.

The City decided to fight the project, which would have displaced all its residents. The case ended up at the Ontario Municipal Board. The property changed hands and the redevelopment eventually took place, but only after city council and the province — then led by Mayor David Miller and Liberal premier Dalton McGuinty, respectively — negotiated so-called rental replacement rules requiring builders to provide new units of comparable price and size to the tenants who had been forced out. (The rules applied to projects with at least six apartments.)

Those laws were embedded in the City of Toronto Act (CoTA), which had been enacted to allow the municipality to be more of a master of its own domain. As Mihevc predicted in 2010, the policy will benefit future tenants in Toronto contending with similar threats. And indeed it has: according to city officials, these rules in just the past five years secured almost 2,200 replacement apartments, including 1,100 designated as affordable (i.e., average rent of $1,446).

Yet almost a generation after the Tweedsmuir showdown, the provincial Tories and their patrons in the building industry have come to get revenge, using the housing crisis as cover. The contentious More Homes Built Faster Act (B-23) includes, among many other changes, a proposal to scrap the rental replacement rules (Section 111 of CoTA) following a year-long consultation process, which is now underway. The City says it is planning to respond to the proposed changes.

However, the fate of the rental replacement laws raises a slew of tough questions, and not just for the current tenants of Queen’s Park. Here are some:

Numbers: Given that so many older apartment buildings in Toronto are situated near transit stations that will be up-zoned to sharply increase densities around rapid transit, does the city’s planning department or Ontario’s ministry of municipal affairs and housing have a handle on the scale of the impact of these twinned reforms?

We know that land around some subway stations has become so valuable that condo developers already buy and demolish office buildings and still make their margins. I can think of plenty of transit nodes where older mid-sized apartment buildings will become fish-food. At the minimum, the planning department needs to take stock and put a number on the scale of this potential transformation. Are we talking about hundreds or thousands of apartments? Or more? I’m hoping the city’s brief to the province includes these data points.

Climate: Upzoning near transit is a climate positive policy. But when the upzoning involves the demolition of existing density, the math seems more dubious. Council in 2019 declared a climate emergency, which I mention only by way of reminder that there are so many examples of how we basically ignore this imperative, including knocking down older mid-rises and office buildings.

Strength: At what point will our so-called strong mayor show some muscle when it comes to legislation that will significantly erode the city’s ability to plan? In particular, there is simply so much about the Tories’ planning agenda that clearly runs roughshod over the interests of tenants who, lest we forget, account for about half the city’s population. John Tory absolutely should not sit on his hands and let the Ford government pillage the CoTA in the guise of housing reform if he knows that these laws put a target on the back of thousands of older apartment units.

Effectiveness: In February of this year, Toronto’s auditor general, Beverly Romeo-Beehler, released a report that cast more than a little shade on the way the city manages and then implements rental replacement agreements secured with developers. According to the report, the planning department hasn’t done an especially good job tracking the replacements, nor did it check to see that one of the basic conditions — new units would be comparable in price to the ones they replaced — was being met. The process, she found, lacked transparency.

The decision to conduct the audit traced back to revelations, first reported in the Toronto Star in late 2020, about the then head of CreateTO offering staff of the city’s real estate agency an opportunity to secure access to apartments at below market rents in a redevelopment project at Yonge and Davisville that had a rental replacement agreement in place. The push for the audit, according to the Star, came from both Josh Matlow, the area councillor, and Tory.

Romeo-Beehler also concluded that Toronto’s rental replacement policy hadn’t kept up with trends in the way the City manages its large and growing portfolio of affordable housing. She recommended that any affordable apartments that are subject to the rental replacement rules be listed on a centralized registry with the rest of the city’s stock of affordable units, specifically to ensure that they end up with tenants who actually need them, as opposed to those who’ve figured out how to game the system. It was smart advice, and council voted to adopt her recommendations in the summer.

At the same time, council’s work on its rental replacement rules shows that the city’s governance and accountability mechanisms, and its ability to take important decisions that improve affordability, are by no means hopelessly broken.

In this particular case, Matlow responded to media revelations by moving a motion asking for the auditor general’s review. Council approved his request by a large margin. Romeo Beehler then did her thing, and council in turn adopted her proposed reforms. Yet all that effort, which was carried out under the auspices of an ostensibly intact law (CoTA), could be for naught if the Tories succeed in gutting those protections.

The point is that unless Tory and council strenuously defend these rental replacement policies, it will be open season on many of those older apartments — a dynamic that will, without any question, worsen the city’s housing crisis, not make it better.