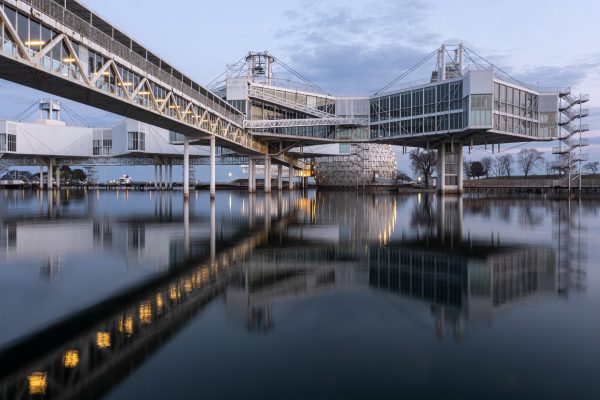 In the days immediately following the municipal election, the second round of public consultations on the revitalization, so-called, of Ontario Place. A provincial website, Engage Ontario Place, seems to be the point of contact, and there has been an online consultation session, facilitated by Bespoke Collective. The process is moving ahead rapidly, including class environmental assessments and the signing of head leases by the two companies selected to build and operate two new venues — a 19,000-seat concert hall and a $350 million spa.

According to Chris Glaisek, Waterfront Toronto’s chief planning and design officer, the design review of the project is a joint undertaking by both the City’s waterfront secretariat and Waterfront Toronto, whose designated areas include Ontario Place. WT’s Design Review Panel has been asked to weigh in on the open space plan, but the City’s own DRP is also involved, because the project must go through a zoning bylaw amendment and site plan approval before council votes on it sometime next year.

The first session, from July, focused on the public space plan, but future sessions will look at the urban design aspects of the new buildings. (DRP members, in fact, were instructed not to comment on the buildings.) The minutes, which are here, indicate that the discussion was lengthy, focusing on everything from heritage protection to the accessibility of public spaces, Indigenous elements, and ecological protection of the islands, etc.

As the panel urged in its consensus feedback, “The proposed master plan does not feel sufficiently public, especially the west island. It is recommended to provide generous, robust, and continuous public access through the site and along the water’s edge.”

However, WT’s design review panel’s role is advisory, and it won’t issue a verdict on the appropriateness of either the concert venue or the spa. Nor is the province under any obligation to respond to feedback from the joint DRP. But Glaisek says he expects that the design team for the Therme Group spa, in particular, will be responsive to feedback.

Earlier this fall, I spoke with Paul Bedford, chair of the Waterfront Toronto DRP and former chief planner, about what he saw and what happens next.

Lorinc: What is the DRP’s mandate with the Ontario Place redevelopment plan?

Bedford: Our role is to advise, obviously, on the public realm first, which we did in that last meeting [July 27] and then it’s supposed to come back for a more detailed presentation and votes and critical comments and all the rest of it. Then our understanding is that the actual projects that are subject to all the controversy are going to come back to DRP and issues ID and then detailed comments and then a vote. But the fundamental issue is that we don’t have a say on the proposed private uses. That’s what City planning has to speak to and they have to make a recommendation one way or the other.

Lorinc: Let me get you to unpack this a little bit more because the public realm is directly influenced by the buildings around it. What is the relationship between the public realm and these two large structures? And how do you comment on that in a way that’s within your mandate?

Bedford: I’ll be very honest, it’s delicate. There were a lot of comments [at the July DRP session] that, basically, the public realm doesn’t appear to be very visible and these uses [the spa and the concert venue] tend to dominate everything. We had a lot of questions about the parking lots and the bridge connections. There’s the impression that there’s a six metre-wide public realm around the private uses. We share all the concerns everybody else has. I don’t know, frankly, where this thing is going to end up. There was a call in [at the July DRP session] for strong Indigenous consultation on this and frankly, I think that may be one of the opportunities that are available.

My question about what’s new here is obviously that these private uses are really going to have a huge impact on the perception of Ontario Place as a public place. We’ve clarified that we cannot come out and say, `Please, [the spa] shouldn’t be there.’ Other people have said they should actually go to Exhibition Place. It’s frustrating, but that’s the DRP’s mandate.

And I don’t know if you’ve talked to [chief planner] Gregg Lintern yet on what his thoughts are. [The city] has got to make a recommendation to council at some point. I think there’s an opportunity there because the parking lots in front of Ontario Place, as far as I recall, are on city-owned land.

When the [redevelopment] proponents came to the panel, one of the guys said, `You know, the first impression you get coming to Ontario Place are the surface parking lots.’ What he implied, of course, is that’s not a great impression. In my questioning and my comments, I totally agree. I said, `No kidding. So what’s your plan to convert these parking lots?’ I made that comment in the minutes. I made a comment about Ontario Square at Harbourfront that was surface parking, [how the city] put [it] below grade, the landscaping, public realm created on top, etc.

Other panel members talked about how the new bridge [linking the parking lot to the Therme spa] would really feed into the private sector use and restrict the public access. We asked all those kinds of questions. To be honest, the presentation was lacking in terms of those level of details, and that’s why we said `No, it’s got to come back and we want to see a thorough examination of topography, the history, the evolution of the site.’ All of those concerns were flagged in the minutes.

I don’t know where it’s going to end up, but I think what you and I know is that public opinion is usually pretty persuasive.

Lorinc: Let me just ask you a general question about the about the space between the spa buildings and the water’s edge. Can you articulate what that balance is? What’s that space look like?

Bedford: There was a point made in the presentation about the six meter wide public access around the perimeter of the island. We said, ‘You know, it doesn’t cut it.’ The reality is there has to be a very strong public sense that the public is allowed to circulate north, south, east west — anywhere on the Ontario Place lands.

If, ultimately, these private uses prevail, and they’re built, the panel will clearly have a lot of comments about the design, the architecture, the sustainability — all those kinds of things are yet to come. We were pretty strong and I felt strongly that the parking lot should be part of the public realm. There should be north, south, east, and west access all throughout the East and West islands.

The other point I find kind of interesting is that the proponents made a big deal out of the William G. Davis Park and how wonderful it is. Which I agree. I love going there. And they said this is the model for us. I say, `Yeah, so let’s see it. Let’s see that continuous public realm achieved throughout.’

I guess where I sit right now is [that] it all remains to be seen in future presentations as to if and when these guys can actually deliver. The people on the [design review] panel are not shy. They’re going to say what they think, but they don’t have any jurisdiction over the proposed uses. That’s the problem. That’s [for] city planning. We flagged a hell of a lot of issues and we asked for an awful lot of material to come back.

This interview, conducted on October 4, was edited for length and clarity