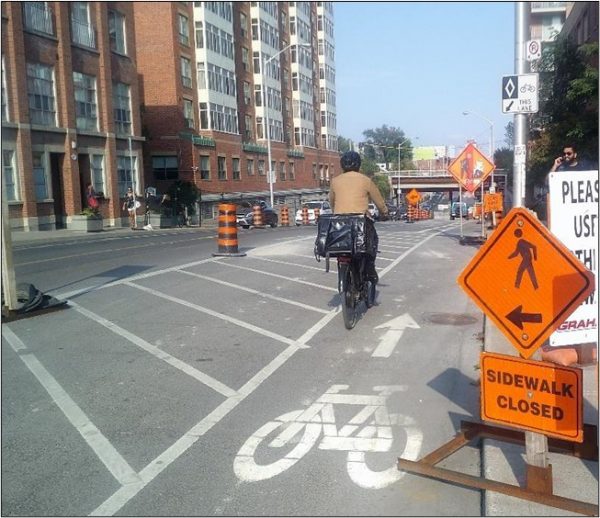 Prior to this September’s return to school, Mayor John Tory announced that the City of Toronto will be doubling down on its construction-related road closure audits to ensure contractors abide by the province’s safety guidelines. While encouraging, this news comes in response to mounting criticism towards a seeming lack of accountability and oversight surrounding the safety of pedestrians, cyclists, and other active road users in construction zones. Many, myself included, question whether this compliance blitz will suffice. To verify, I decided to conduct my own audit and assess the extent to which contractors abide by the province’s safety guidelines.

Pedestrians and cyclists remain among the most vulnerable road users in Toronto. And this is especially true amidst the City’s many construction sites and related road closures, which often do not provide an adequate safe travel alternative. Indeed, traffic signs such as Caution: construction ahead or Sidewalk closed have become ubiquitous in Toronto and their presence does not appear to be receding any time soon, as the city continues to voraciously encourage new development. “Construction growth is a sign of a vital and flourishing city,” says Mayor John Tory, and his sentiment is perhaps best encapsulated by observing the number of cranes that tower over Toronto’s skyline. Toronto continues to boast the most cranes of any city in North America, 252 in the first quarter of 2022, up from 208 in the first quarter of last year and far ahead of its closest rival, Los Angeles (51 in Q1 of 2022).

While to be expected in large cities like Toronto, construction-related road closures are often difficult to navigate and dangerous, particularly for active road users such as pedestrians and cyclists. Upon combing through the sparse available data collected by the Ministry of Labour in 2018 one can see that there have been many reported civilian injuries at or near construction sites in Toronto. The prominence of such incidents has prompted the provincial government to enact a set of guiding principles to ensure the safety of pedestrians, cyclists, and other active road users in construction zones across the province. Such considerations are clearly stated in the most recent Ontario Traffic Manual, although the extent to which they are followed by construction crews remains ambiguous.

Anecdotally, many cyclists complain that the temporary cycling infrastructures installed in construction zones have fallen short of their safety requirements, and activists have even created social media accounts to alert cyclists and document unsafe practices. In hopes of providing a more rigorous account of things on the ground, myself and a research assistant, Rosine Toutsop Dongmo, set out to visit construction-related road closures in Toronto. Using data available on the City of Toronto website, we were able to locate and visit every construction-related road closure within the old City of Toronto limits during the months of August and September 2022, and establish the extent to which construction firms were abiding by the Province’s regulatory guidelines. A total of 93 construction sites were visited during this two-month period, 59 of which included some form of road closure and 26 of which included some form of cycling infrastructure such as a cycle track, bike lane, or sharrow.

Results from this investigation demonstrate a widespread disregard for the safety of active road users in construction zones. This includes a lack of mandatory signalisation, a dismissal of minimal pedestrian and cycling infrastructure width requirements, and an overall prioritization of automobiles over active road users.

According to the Ontario Traffic Manual, pedestrians must be “provided with a safe, convenient, and clearly delineated travel path” through work zones that “minimize detours and eliminates backtracking.” This includes providing a parallel diversion route, such as a temporary sidewalk or detour, when sidewalks must be closed. Regrettably, of the 49 construction sites visited with at least one sidewalk closure, only 21 (43%) offered such diversion routes. Even more disheartening is that of the 21 sites offering diversion routes, only 13 complied with the Accessibility for Ontarians with Disabilities Act (AODA) requirements. 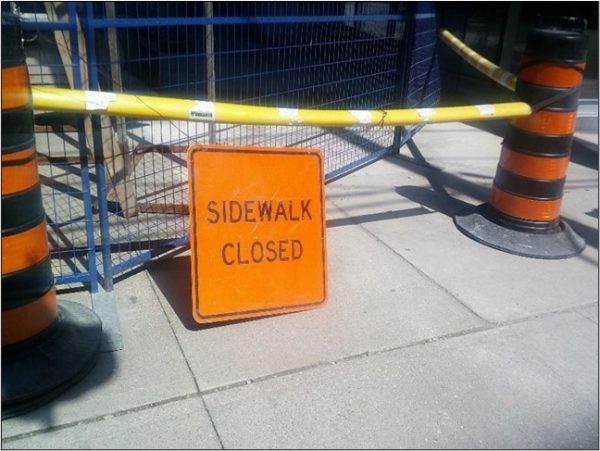 The Ontario Traffic Manual further requires a 1.2 metres minimum sidewalk width to accommodate vulnerable pedestrians, which it defines as seniors, people with disabilities, families with strollers, and small children. Unfortunately, this guideline is also often disregarded, as only half of the sites offering a parallel diversion route abided by the 1.2 meters width minimum, in some instances reducing the sidewalk width to as little as 0.6 meters – half of the required minimum, and much too narrow to accommodate a wheelchair or stroller.

A similar picture emerges when considering cyclists, and although the Ontario Traffic Manual states that “every effort should be made to minimize disruption to the [cycling] facility,” our analysis reveals that closing cycling infrastructure during construction has become the norm. Indeed, of the 26 construction sites located on streets with cycling infrastructure, 23 (88%) had rendered these facilities unusable and forced cyclists – often without appropriate signage – to merge into car traffic. Despite this practice being dangerous, the conversion to shared roadway is permitted within the Ontario Traffic Manual when cyclist traffic cannot be accommodated otherwise, but the narrowing of motor vehicle lanes (including parking lanes) should always be prioritized. Yet, given that 88% of construction sites with cycling infrastructure opted to remove it and that the narrowing or removal of parking lanes on these very same sites only occurred in 30% of cases, it appears that such guidelines were not always followed. 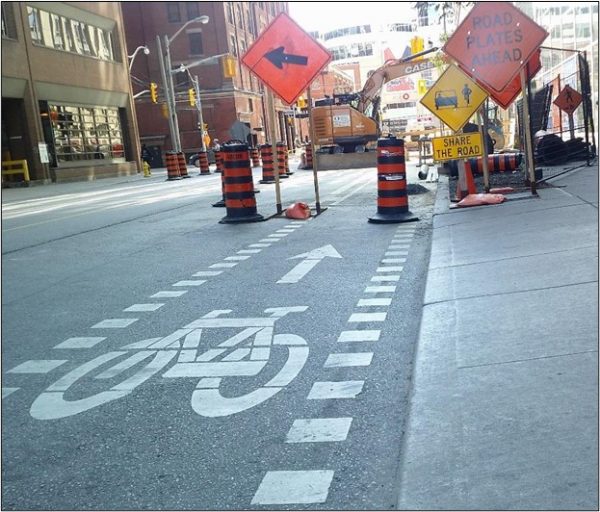 Moreover, our research shows that even in the handful of cases where cycling infrastructure was left open, rarely did they respect the minimal width imposed by the Ontario Traffic Manual. Throughout our investigation, only once did we find temporary cycling infrastructure in a construction zone that abided by the province’s 1.2 meters minimal operating space requirement. 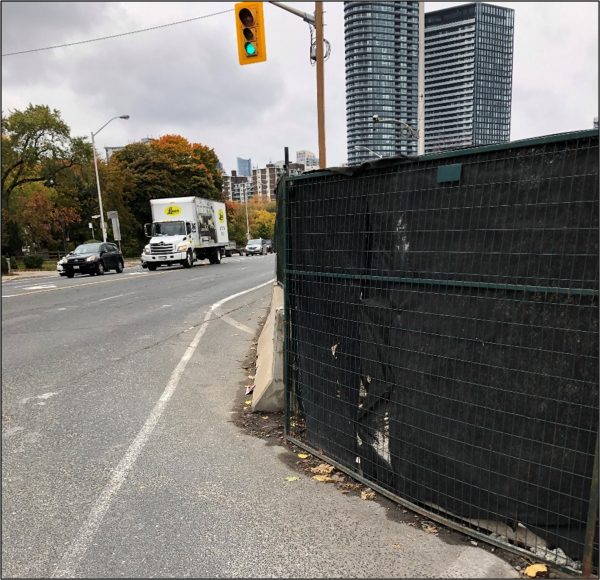 The City of Toronto has recently pledged to reduce traffic fatalities and serious injuries by enacting a Vision Zero road safety plan, which it believes will help address safety concerns for the most vulnerable users of our streets, including pedestrians and cyclists. However, in a city growing as rapidly as Toronto and with apparently very little oversight as to whether safety guidelines are abided in its numerous construction zones, one is increasingly led to question whether the City’s voracious appetite for development is impeding its ability to meet its Vision Zero targets.

Several attempts to contact Toronto 311 were made during this study to discuss the matter at hand and inquire about the status of active construction zones missing from their dataset. To date, these inquiries have gone unanswered.

Mischa Young is an Assistant Professor in the Department of Urban Environments at the Université de l’Ontario Français. His research focuses on urban transportation and innovative solutions to render cities more liveable and sustainable.

All photos by Mischa Young