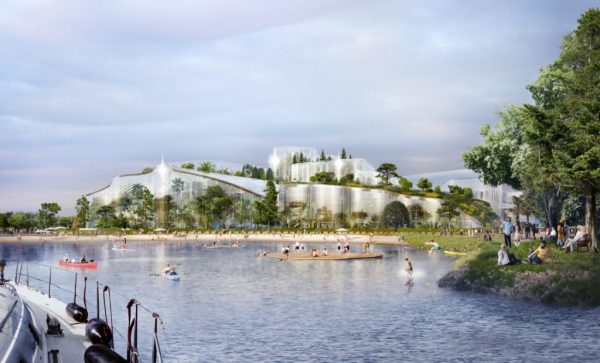 At some point this week, City officials will upload the Ford government’s zoning bylaw amendment application for the Ontario Place redevelopment to the Toronto planning portal (search “955 Lakeshore Boulevard”).

Submitted in late November, this document marks the beginning of what will be a year-long exercise in vetting the province’s plan to put a $350 million private spa and a new concert venue on the 50-year-old site — a process that will include $200 million for site remediation, the removal of several stands of mature trees, the installation of enough new municipal infrastructure to accommodate these massive indoor structures, and possibly even the construction of an underground parking lot that could run to $100 million.

An official plan amendment and then the formal development application will follow, along with site plan reviews, public consultations, design tweaks, council debates, and a vote.

Technically, the City has the authority to accept or reject the proposal. In both theory and practice, the province can do what it wants. Ontario Place is provincial property, and Queen’s Park can always impose a ministerial zoning order (MZO) that trumps everything else.

Last week, the company sent out a flood of refined renderings in what has clearly become a public relations battle. Critics, including the Toronto Star‘s editorial page, are challenging the very premise of this plan. “Keep Ontario Place as a public space,” as the Star’s editorial put it. As this scheme moves into the City’s vetting process, here are ten questions I’d pose about what’s happening, what we don’t yet know, and who ultimately decides.

1. How much is the province/Ontario Place charging Therme Group and Live Nation to lease the spaces on the east and west islands?

The details of the lease — its duration, the rent both companies will be paying and any other arrangements involving development charges, municipal water and wastewater fees, etc. — should be made public immediately. We have no idea if the Ontario government has cut a sweetheart deal with Therme and Live Nation, or if they’re charging a rate commensurate with the desirability of a unique waterfront location.

It’s a public space and the public has a right to know.

2. Why has the government opted to exempt the project from a Class EA?

Infrastructure Ontario earlier this year posted the results of an EA for the remediation of Ontario Place, and the document identified a range of issues — site contamination, for example — as well as ecological concerns, including threats to “distinctive environmental features,” and the potential for the project to jeopardize species at risk and their habitats (i.e., migratory birds). But Infrastructure Ontario has opted to exempt the project itself (i.e., the spa and the concert venue) from the EA process, arguing that Therme and Live Nation are private ventures and therefore beyond the jurisdiction of the legislation.

The obvious question is, why? After all, both are being built on public land, as a result of a public procurement process.

3. Why did Infrastructure Ontario not tender the project to a complete bidding group, i.e., including contractors, financers, equipment suppliers, etc., as is standard practice with other large-scale projects (e.g., rapid transit, court house construction, etc.)?

So far, besides Therme, the only member of the project team that has been made public is the local architect, Diamond Schmitt. In all other major IO undertakings, the bid is awarded to a consortium. There’s no indication as to who else is involved, and neither IO nor Therme have explained the source of financing for this project. Therme is owned by a large German heating and cooling equipment supplier, but the company, according to its own public statements, has a pipeline of ten projects on the go, with an approximate combined value of almost $2 billion. The public should know where the money is coming from.

4. Will a fairness commissioner be appointed to ensure that the procurement process is transparent and accountable?

There are lobbyists and Therme Canada officials with extremely close ties to the Ford government, so the process cries out for oversight from a fairness commissioner. These officials, often judges, are tasked with overseeing complex procurements to ensure they are carried out in a transparent and accountable way. A specific concern for me has to do with the money the province intends to spend on municipal infrastructure on the site, and, possibly, an underground parking garage. None of this work has been tendered yet, nor have we seen third-party evaluations of the proposed outlay.

The public deserves assurances that the costs — an estimated $300 million, but probably more — will be apportioned appropriately between Ontario Place and Therme/Live Nation. As well, the Ford government is in a position to make huge public investments in the site that financially benefit former Tory insiders. The whole thing cries out for way more transparency.

5. Is the provincial government prepared to over-ride a council decision to reject the zoning bylaw and official plan amendment which will be tabled by the city in the next few weeks?

The Ford government has used MZOs for everything from large development tracts on environmentally sensitive land to modular supportive housing projects. If municipal affairs and housing minister Steve Clark is planning to override all the City’s analysis and council’s ultimate decision just to get this project going, let’s skip a year’s worth of expensive planning foreplay. Queen’s Park needs to come clean on its intentions instead of cranking up public expectations.

6. Who will be financially liable for the structure if the Therme Canada spa venture fails?

As part of the RFP, bidders, including Therme, were required to submit business plans, but these have not been made public, except a claim that the spa will contribute C$150 million to Canada’s GDP. The company is counting on several million visitors per year and has pledged an entry fee of $40 per person (the real revenues will be generated inside the facility).

Therme has four operating spas, all of them in central Europe, where spa-going is a long-standing tradition. Two in the U.K. — in Manchester and Glasgow — are in the development pipeline, although both appear to be behind schedule. Demolition on the Manchester site has only just begun, and a company spokesperson said the firm is still negotiating approvals with Glasgow planning authorities. Therme wants to build several spas in the U.S., including one in New York, and recently revealed a proposal to develop another in Korea.

It’s by no means clear to me that the company will be able to generate traffic to its Ontario Place facility throughout the year. Given the huge amount of public investment in the site, and the fact that the spa is a single-use building, taxpayers have a right to know what the contingency plans look like if the project goes sideways. Who is on the hook? And will Therme or its as yet unnamed investors retain the right to retrofit the venue as, for example, a casino, if the spa project fails?

7. Is the city prepared to use its site plan approval and design review processes to ensure that the project doesn’t pose a threat to migratory birds and the site’s other natural and heritage features?

In order to hasten the development of new housing, the newly enacted Bill 23 watered down many of the provisions in the Planning Act that enabled municipalities to compel developers to pay attention to elements like bird-friendly glazing, energy efficiency, urban design, heritage and landscaping — although planners can still push for these features.

A spa, needless to say, won’t solve our housing problems. Therme has promised that its project will bring a range of benefits, including LEED certification, shoreline restoration, and something called a “wetland innovation zone” (really). I hope the city will do its due diligence and make sure this giant structure actually delivers on these candy-in-the-window promises.

8. Will the City or the Ontario government take steps to make these facilities broadly accessible, i.e., beyond those who can afford the entrance fees?

Therme has curated a collection of local worthy organizations to demonstrate its commitment to the city. And the company is not shy about making claims about the broad societal benefits of spa-going — from reduced public health care costs to improved nutrition, mental health and access to culture. Yet the reality is that what it is selling is a luxury wellness experience delivered in one of Toronto’s pre-eminent public spaces — a park! My question is whether Therme or Ontario Place will do anything at all to make this amenity available to individuals and families that can’t dole out several hundred dollars for an afternoon at the spa.

9. Is the City prepared to invest parkland reserve funds to transform some or all of the Ontario Place parking lots into public spaces to reduce what it has described as “the barrier effect”?

The Waterfront Toronto Design Review Panel pointed out, correctly, that the two vast parking lots that separate Ontario Place from Lakeshore Boulevard and the CNE are not just barriers but missed opportunities. One way of mitigating the loss of most of the West Island to an exclusive private spa is to re-think those parking lots and transform them into park space that connects with what remains of the public spaces at Ontario Place.

The Trillium Park/William G. Davis trail, which opened in 2017, transformed a service zone on the east end of the site into an outstanding public space, and surely the parking lots should evolve in a similar way, especially given that the CNE is destined to become one of the best served transit nodes in the entire GTA.

10. Will Mayor John Tory use his veto powers to win approval for the zoning bylaw, the OPA and the development application, even if a majority of council members oppose the project?