It looks like a heavily landscaped path in some park, or perhaps part of the South False Creek seawall – but it isn’t. 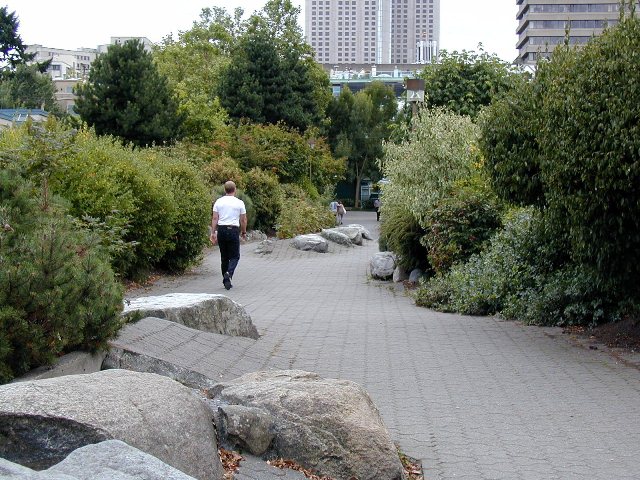 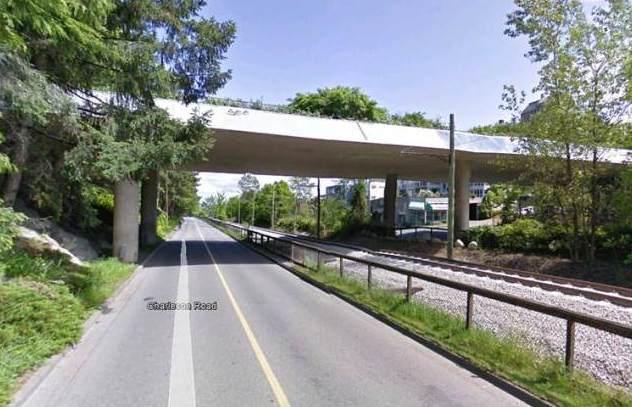 The Laurel Street land bridge is still the major connector between South False Creek and Fairview Slopes (map here).  It’s Vancouver’s own mini-High Line or Promenade Plantee, way before anyone thought of those.

As background to Places That Matter – the Vancouver Heritage Foundation’s contribution to this city’s 125th anniversary – Michael Kluckner did some research on this chosen space:

The Laurel Street land bridge connects Fairview Slopes with Charleson Park, the False Creek seawall and False Creek Elementary School across busy 6th Avenue and the old “south shore line” of the B.C. Electric Railway. It links the amenities of False Creek with Fairview Slopes, which has little open space.

The bridge was part of Phase I of the development of the south shore of False Creek in the mid-1970s, an innovative, imaginative project that set the tone for the modern, 21st-century city. Coordinating architects Thompson Berwick Pratt and Partners prepared a preliminary scheme of residential enclaves including a wide variety of housing types for a diverse population. Various architects designed blocks of condominium townhouses, co-operatives and apartments for the sites.

Henry Hawthorn and partner Don Towers of the firm Hawthorn Mansfield Towers Architects designed the land bridge. The structural engineer was A.A.Williams & Assoc. Ltd. and the landscape architect was John Lantzius, although most of the work was done by Harold Neufeld who was working for John at the time.

The commission from the City specified the width and the intention that it should feel more like land than a bridge – hence the name. The angled mirror glass on the edges was meant to reflect the sky and cause the bridge to dissolve like a mirage for drivers on 6th avenue. City councillor, park commissioner and landscape architect Art Cowie has been credited with the idea.

Michael also went to the source: one of the young architects, Ron Walkey, who was hired to work on the initial design of South False Creek, and, with Ron’s recollections, discussed a False Creek plan that might have been.

When we began the original studies for False Creek redevelopment about 1970, I had returned from Berkeley to join a team headed by Paul Merrick of Thompson Berwick Pratt (TB&P) to study all options for the future of False Creek, not just Area 6 (the first development area of False Creek South) but for the entire basin, and to propose guidelines that would shape development proposals.

A multi-disciplinary team was put together and given a six-month time period. The team office was in that small brown-shingled house on the east side of Choklit Park that I believe had once been the office of Rhone and Iredale architects. There were the remnants of a small neighbourhood park on the land at the street end and along the steep access path.

The ‘real’ land bridge never got built. It was the idea of “Station Six Team”, the group in competition for the final design layout for Area 6, False Creek.  (TB&P, Team Six, and Bains Burroughs Hansen were the short-listed competitors, and TB&P won.)

Here’s a photo of “Station Six Team” passed on to me recently by Barry Downs.  The name came from the fact the six principals with a small staff worked on the competition out of a studio in the old CPR train station. 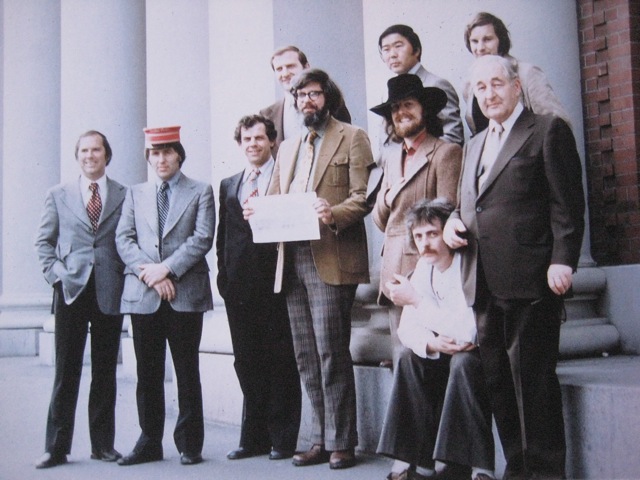 The three major design problems were:

* The land next to Cambie Street bridge was in poor condition, swampy and polluted; expensive to build wood frame housing on.

* 6th Avenue fractured Fairview slopes from Area 6and the waterfront.

* The commercial activity along Broadway was cut off from Area 6 both in slope and by 6th avenue traffic.

Our solution was to group all housing enclaves to the West, leaving the required park area to be developed adjacent to Cambie Bridge. Drivers would then enter the city through a park space, an echo of Stanley Park.

To overcome the separation of the two areas we studied the possibility of relocating 6th Avenue up along 8th, but this would not work. To unify the areas, make the community more whole and the enclaves more connected, we proposed an extensive land bridge, covering four blocks over 6th Avenue. The top would provide saleable areas for housing development and parking for residents underneath.

The cost of this decking would be met by the sale of the space above for residential construction and efficiency in building the required parking requirements (following the design guideline “Slow/Fast Gradient” which aimed to keep traffic away form the waterfront).

The enclaves were to be more tightly arranged, less ‘romantic’ and more urbane than in the TB&P scheme.

To connect to waterfront and the community to Broadway we proposed an international competition to design a cable car system to run down Oak Street through the community to reach a waterfront community centre that would include some recreational and commercial activities.

The competition judges included Ray Spaxman and Alvin Narod who doubted our cost estimates and concluded that the front end costs of the land bridge would be too high.

So we are left with this skinny built memory of a great idea.  … it’s not old sour grapes of which I speak, but we did have a better plan.