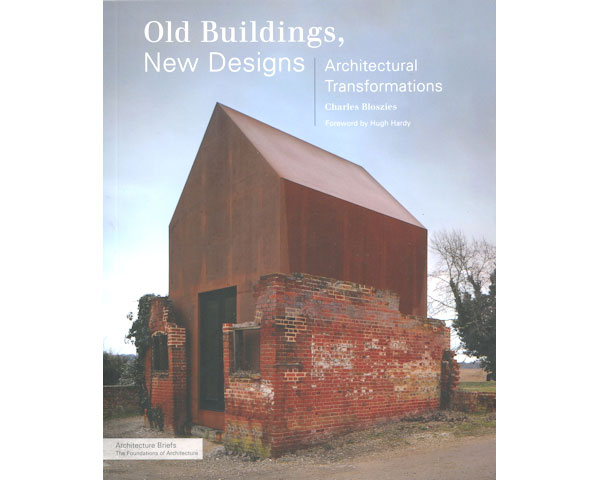 “Design integrity is essential for exemplary architecture” – it is with this philosophy that Charles Bloszies rigorously investigates the complex relationship between old and new. In his newest book, Old Buildings and New Design: Architectural Transformations, Charles Bloszies sets out to “explore successful design approaches for visible interaction between new and old architectural styles.”

As urban densities rapidly increase around the world, a strain is put on our built environment that requires architects and designers to identify fast and creative solutions for transforming old architecture into new, culturally appropriate and structurally sound buildings. Building reuse, recycling and retrofitting has been identified as socially, environmentally and (occasionally) financially more sustainable, while adaptation or preservation of historic buildings is an important component of urban “smart growth” strategies.

However, as Bloszies states: “not everything old is good,” and often, it is the “urge to preserve” that has citizens and designer’s fighting to save historic architecture, and not the architectural or the cultural value of the building itself. It is with this type of diplomacy that Blosize identifies the sustainable and aesthetic implications of preservation, challenges with policy and bylaws, structural difficulties and the major financial burdens that will likely be encountered with historic interventions. He reminds us that a good design “balances the desires of all the stakeholders” and that it is architectural diversity and integrity that will create a successful project.

The extensive collection of case studies included in the book consists of mainly unpublicized projects that range greatly in scale and context. However, each of them poignantly  illustrates Blosize’s notion of architectural integrity. The projects are categorized as Small Interventions, Major Additions, Repurposed Buildings and None of the Above. Within each category the projects are further classified as “extreme, restrained or referential” examples of new interventions on old architecture. Each project serves as an example of “exemplary” architecture in that they express both thoughtfulness and clarity of purpose without comprising the integrity of the existing building or the new design.

The Dovecote Studio – an example of a small intervention – was built by fitting a new building into the envelope of an existing building. It was made out of Corten Steel which will change colour with age to match the existing red brick. According to Bloszies, Dovecote Studio is successful due to the appropriate scale and material of the intervention, the crisp and modern design, and the success of situating successfully into the context, or “maintaining the romance,” of the historic site.

Major Interventions is the most common form of architectural intervention and focuses on how large scale changes can be managed in terms of design integrity. One example is Renzo Piano’s Morgan Library in New York City. The subtle design is considered “restrained” as it uses a new, modern element to knit together a three historical buildings of differing eras. In Bloszies words: “the scale of the new piece joins the adjacent buildings together as wings of a single institution.”

Piano’s design uses the nuances of the diverse architectural elements in each building and creates a subtle, simple design that resolves a highly complex architectural problem. It is the success of maintaining and celebrating each individual element, while still unifying it as a whole, which makes this a successful example of a large-scale intervention.

Bloszies also looks at examples of Repurposed Buildings including the California College of the Arts in San Fransicso, the Selexyz Dominicanen Bookshop in the Netherlands and live-work conversion in Somerville MA. These particular projects are highlighted as successful repurposing interventions, in which the exterior finishes are retained and interior spaces are retrofitted in a way that creates a dialogue between the old and the new.

Bloszies also identities three final projects in the None of the Above category. Within this section, projects such as 185 Post Street in San Francisco and Edourd Francios’ Hotel Fouquet’s Barriere in Paris, are both compelling and creative solutions to the design complexities of old and new.

Upon reading Old Buildings and New Design: Architectural Transformations, it becomes clear that architectural preservation is a complex problem, perhaps one of the most challenging projects that designers and planners will face in the short- and long-term future. With this in mind, this book offers a concise look at potential difficulties, as well as a strong set of diverse and successful solutions. Bloszies diplomatic approach advocates for the conservation of buildings done in a reasonable and creative manner that allows room for growth and diversity to exist within the urban fabric. A complete conservation of a building can have the same affect as the tabula rasa approach to development, and it is within the complex relationship between old and new explored well in this book, that exciting and vibrant urban settings can exist.

Footnote: This book lead me to think about interventions on historic architecture of Vancouver: the UBC Main Library, City Square, the Scotia Bank Dance Centre, Segal School of Business, and most of Gastown. In the language of Charles Bloszies, one must wonder where these projects fall: are they examples of “extreme” “restrained” or “referential” preservation? How successful are they at creating a diverse urban setting, while retaining the architectural integrity of the original building? Food for thought the next time you are strolling through the streets of downtown Vancouver.