Yesterday was the first day of Heritage Week, and in BC, the theme is Power and Energy. In celebration, thereof, I offer this 1950 image of BC Electric workers fixing a power pole at Grant & Commercial Drive (VPL 81076): 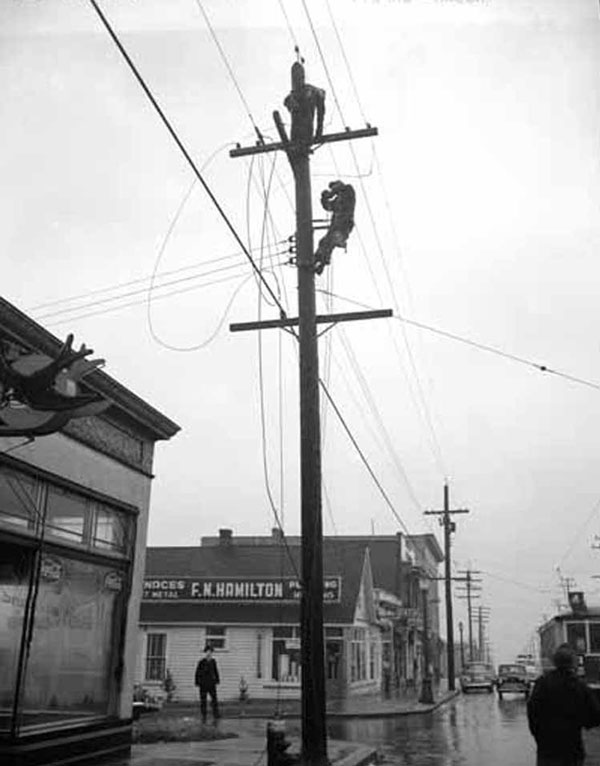 Here is the same corner, Grant & Commercial, looking northwest in 2011: 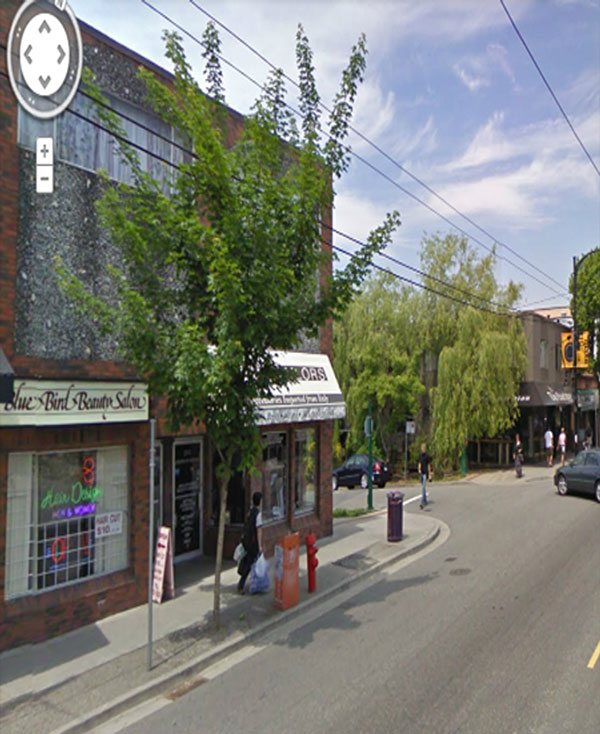 The first thing I notice is just how many more trees we have in our streetscapes than we did 60 years ago. In fact the rebuilt version of F.N. Hamilton’s building on the far side of Grant (which is now Charlatan’s Bar) can hardly be seen through the trees.

Fred Hamilton had moved his hardware and plumbing business into 1447 Commercial in 1945. In May 1957 they demolished the building that can be seen in the first photograph and erected a new shop in concrete block. The Hamilton’s (having been in business on the Drive since 1914) sold out to Hillcrest Plumbing in 1969. Hillcrest closed in 1987 after which the building was taken over by a series of restaurants and bars including the glorious Bukowski’s where the present writer learned how to perform poetry to a loud crowd.

On the nearside of Grant we have 1501-1503 Commercial which was built by Angus Campbell in the spring of 1936. As the upper image shows, this building was originally a single-storey flat-roofed structure, a signature style for Campbell. However, as can be seen from the modern photo this building now has two storeys, a change that was made in 1970s.

What the two images also reveal is the wonderful continuity of the Blue Bird Beauty Salon. The Blue Bird, which was founded on the Drive in 1926, was an original tenant of 1503 Commercial when it was built in May 1936 and they have stayed there ever since. In the image from 1950 I was excited to see their old Blue Bird sign at the far left of the photo.

Finally, and returning to the theme, the electric pole being working on in 1950 is no longer in that position, I see, though the fire hydrant is.

Jak King has lived on Commercial Drive for more than twenty years. Now retired, he has devoted many years to the study of the Drive’s retail, social, architectural and political history. He has published two books on the subject, with two further studies in preparation.