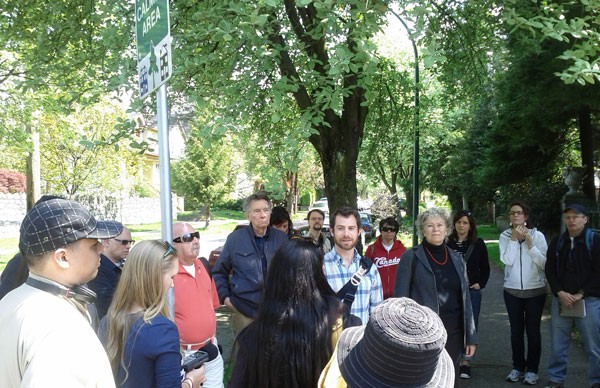 [Editor’s Note: We are happy to present the second of three InDepth Features covering a trio of special Jane’s Walk neighbourhood tours around Marpole, Grandview-Woodland, and the West End. These were organized as a unique partnership between the City of Vancouver, Museum of Vancouver and Spacing Vancouver, in light of the ongoing Community Plan process currently happening in each important district. This will be followed by podcasts of the tour, if you missed the Walks, and a final dialogue event on June 19th. Stay tuned for more information.]

On Sunday, May 6th, local resident Dan Freeman and Marta Farevaag—Principal at well-known landscape architecture firm Phillips Farevaag Smallenberg—led a walking tour of the Grandview-Woodland community as part of the annual Jane’s Walk series. Over fifty people turned out for the walk, many of which had a thorough knowledge of the area and had lived in the neighbourhood for years. Over the course of the two-hour tour, attendees were introduced to how the area is changing by examining the neighbourhood’s fascinating mix of old and new projects.

The walk began at the Britannia Community Centre, a complex entirely designed by the community in the 1960’s and 70’s, which highlights the community’s collaborative yet sometimes combative history. Marta characterized the well used centre as a ‘somewhat failed experiment.’ She described the the Italian villa theme of the building as feeling oddly out of place, leaving narrow lanes with poor visibility. Despite full public input into the design, its amenities are scattered amongst an intricate maze often leaving, even those who nearby, unaware of what is available.

Some scoffed at the development of the community centre for demolishing many homes and terminating at Napier and Commercial. The fact that decisions made in the 1960’s and 70’s are still controversial in this neighbourhood speaks to how seriously local residents take the quality of their community and building environment.

The tour carried on to Britannia secondary school where the original Edwardian brick school house is still in use. Unfortunately, it’s nearly impossible to see the original building, as it has been surrounded by concrete expansions over the years. The front steps to the school used to look out upon a view of downtown Vancouver, “The Grand View” as Marta stated, with audible capital letters. Now the students exit through the side, the original steps long blocked by bland concrete structures. The view would have elevated their daily lives, adding beauty to their world and giving them a real sense of place, rooted in the natural topography of the area.

Britainnia Secondary School was built more than 100 years ago. (Photo: Vancouver School Board)

From the discussion that took place it was clear that everyone has a stake in the community—renters, owners, rich, poor— and they all converge at Britannia secondary. This led to the saying that, with the diversity of people involved there, Britannia is the perfect training ground for politicians.

As we walked onto William Street at Woodland to look at some of the original housing stock in the area, a man riding the back of a shopping cart rolled down the hill past us. Clearly on his way to collect empty bottles and cans, he offered the crowd a clear reminder of the diversity still existent in this community.

Much of this neighbourhood was built at a time when Edwardian styles were in vogue. When the area was first built, developers frequently bought large lots for the purpose of subdividing. However, unlike other subdivided neighbourhoods, early developers built with the intention of living in the area, thus creating a wonderfully varied housing style.

Walking east to Grandview Park, it was impossible to not be struck by the vibrant public life there. The playground was covered with children, a dozen bike polo players were in their newly designated court, dogs were out for a walk, and many people were just sitting on the lawn enjoying the sun. The park recently went through a significant upgrade and, as is common when transformations have taken place in the community, many of the things added or removed caused a great deal of heated debate. 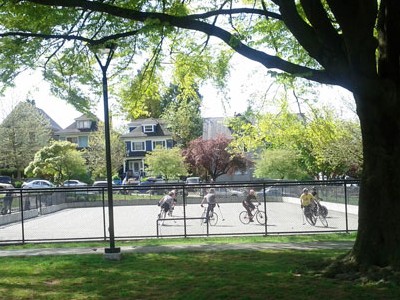 An interesting story focused on the transformation of the tennis courts formerly located at the south-west corner of the park. Seeing the often vacant and unused for tennis, a group of ‘bike polo’ advocates—including Lisa Moffat, Community Planner and Chair of the North American Hardcourt Bike Polo Committee—got involved in the community outreach process by asking for the area to be re-purposed for their use. Sometimes community engagement can really work; they got their way and now the the first purpose-built hardcourt bike polo court in North America is in constant use by local and international players.

From here, the conversation shifted to Commercial Drive and various ways people interact with the businesses along the popular street. The story of Joe’s Cafe was discussed and how in the 1990’s the community rebelled against Joe’s Cafe for throwing out two kissing women. Picket lines were drawn, kiss-ins were organized and the community went so far as to create a counter-cafe, named Josephines, run by, and for, women of the community.

Another fascinating story was a failed McDonalds on 1st Avenue. This instantly got the group buzzing; with obvious pride in their community for keeping out the “evil” chain stores, the group threw around names of various franchises that were also driven out over the years.  This pride in keeping the Drive unique permeated the dialogue throughout the walk.  Yet, while the resistance to chain stores continues to be strong, there are still some chains that have gained a foothold in the neighbourhood: Tim Hortons currently sits in the heart of the Drive in Il Mercato Mall near 1st Ave, Starbucks at 2nd Ave has survived and a Cafe Crepe has even moved in recently jut north of 3rd Ave. 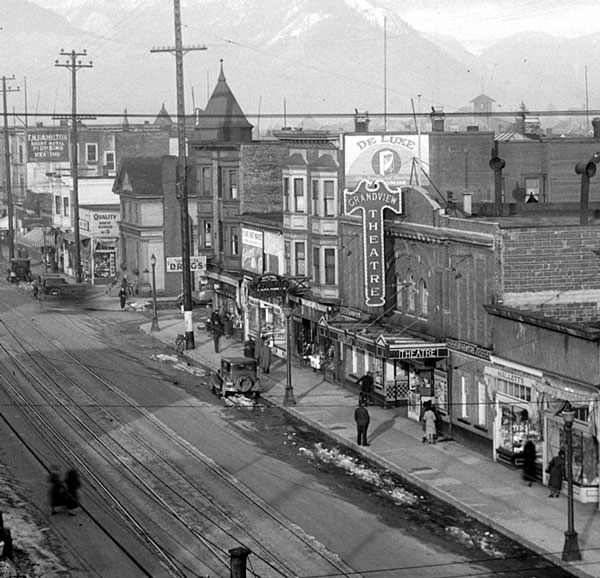 On Commercial Drive at Grant Street, the planning elements that make the neighbourhood so unique were highlighted. According to Freeman, from Grant northbound, the street is one ‘survey chain’ wide (66 feet) making it a fairly narrow space compared to other arterials which tend to be 99 feet wide. This space is marked by numerous cafe’s and restaurants.

Feeman went on to say that south of Grant Street, the road widens out to a chain and a half (99 feet) and the difference is palpable. There are considerably fewer businesses and wider lots with a more car-dominated environment. The qualitative difference is particularly evident between 1st ave and North Grandview Hwy.

A curious effect of the highway plans that Vancouver defeated in the 70’s was that building setbacks were increased north of 1st Avenue to widen the road. The widening never happened leaving buildings built with ample space for patio’s that have resulted in a vibrant atmosphere on that part of the Drive.

Without wider setbacks and a shorter road width, the classic ‘Drive atmosphere’ may not have been possible. Similarly, without large Edwardian buildings easily converted to multiple rental suites, the density may not have emerged to take advantage of the walk friendly, patio-filled neighbourhood. In many ways it’s not just the people that make up the place, it’s the way the place was built to house the people that creates the sense of home and identity evident in Grandview-Woodlands.

At Victoria Park, we discussed how public space use has evolved with the community. Built by English-descended residents for lawn bowling, it was eventually taken over by the Italian community for bocce. During the upgrade to Grandview Park, this normally sedate park bustled with activity and now comes off as a relatively recent upgrade, itself. 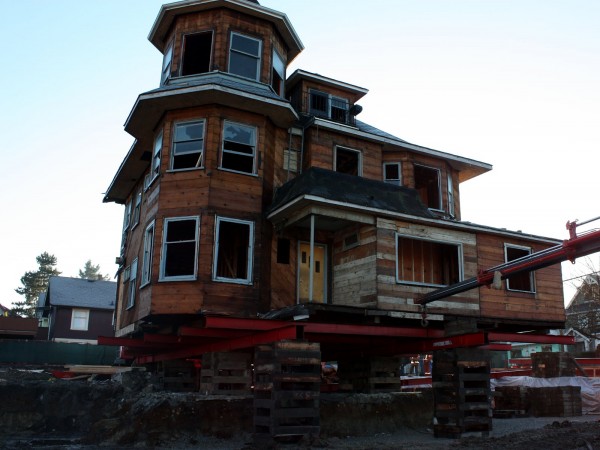 The retained Jeffs House in process of moving across its development site. (Photo: James Evans via Grandview Heritage Group)

At Salisbury and Charles Street, we arrived at the Jeff’s Residence, a heritage mansion undergoing major redevelopment. As the renewal was described, the residents on the tour noticeably stiffened. A few shook their heads at the description. Even though the heritage building is being maintained without significant alteration to its form or number of units, there is still substantial opposition. The crowd noticeably relaxed, suddenly appearing curious, even positive about the construction when Marta pointed out that the developer was from the neighbourhood.

Any community facing demographic changes and rising housing prices is going to begin to feel under siege. The overriding theme of the conversations amongst those on this walk wasn’t an opposition to change, but rather an opposition to outside change. The pride at throwing out McDonalds, the community taking action over acceptance at Joe’s, being more comfortable with re-developments done by local developers, all point to a neighbourhood closely in touch with itself and its sense of identity. 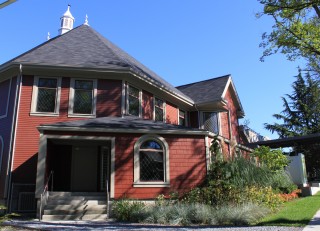 Having seen schools, houses and the commercial district, the tour ended by turning our attention to the arts: more specifically, two important neighbourhood cultural buildings, the Vancouver East Cultural Centre (popularly known as  The CULTCH) and the Wise Hall.  Thus solidifying the fact that Grandview-Woodland is a complete community—one that even includes groundbreaking arts scene.

I first discovered this neighbourhood growing up and coming out to live shows at Wise Hall, an inexpensive outlet for young and aspiring bands. Similarly, the CULTCH has been a driver of the arts in Vancouver for decades with its high-quality and recently renovated venue serving the arts community well.

By the end of the tour, it was clear that Grandview-Woodlands benefited from many of the early decisions made in the neighbourhood and that it has become a gathering point for various groups due to it’s livability since that time. As anywhere, residents took over space for their purposes: lawn bowling became bocce, tennis gave way to bike polo and a community grew out of political and social action.

No neighbourhood stays the same, nor should it. As evident from the Grandview-Woodlands tour, the area’s residents have a strong understanding and care for the nature of the neighborhood’s urban place. They will be careful about the changes that do occur and given the unique spirit and identity that currently exists there, one can’t really blame them.

There are a couple of Special Neighbourhood Energy Futures workshops occurring on Saturday, May 26th and June 9th for both Marpole and Grandview-Woodland, respectively. They are a joint venture between City of Vancouver and University of British Columbia. You can read more about them here.
***

Patrick Meehan is a Vancouverite with a passion for urban thought and systems. He is Currently studying urban geography and working as a Planning Analyst for the Urban Condition design collective, but his keen eye towards the field of city building is grounded by his other lives as a local bar tender and community organizer.