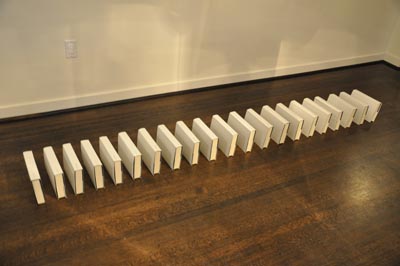 Kate Armstrong’s PATH – a 12 volume bookwork with text generated by the physical movement of an anonymous individual living in the city of Montreal between 2005-2007.

The Goethe Satellite Vancouver is part of a 2 year initiative of Germany’s Goethe-Institut to create a programming framework where artists and curators are asked to develop projects in Vancouver. With more permanent facilities in Montreal, Ottawa and Toronto, Kate Armstrong, an independent curator and artist, is currently a pivotal member of those working with the local branch of the Goethe.

Armstrong is active in Vancouver’s arts scene with numerous works relating to psychogeography and urban experience, and  is also a co-founder of Revised Projects – an independent, curatorial collection of projects which emphasizes participatory and interdisciplinary partnerships.  Revised Projects is managing the Goethe Satellite Vancouver which has delivered five major projects over the course of 2011-2012 year, with partners including the Waldorf Hotel, Instant Coffee Collective, 221A Artist Run Centre and Fillip. More are to be announced.  The overall imperative of these works is to develop stronger linkages between Vancouver, Germany and Asia through artistic development and exchange.

In May, Armstrong released a 12-volume edition of her book called “Path” which follows the life an anonymous individual living in Montreal between the years of 2005-2007.  As it relates to public-private juxtapositions, this project tagged this anonymous individual with a textual passage every time they accessed the internet using public wi-fi.  The outcome expands upon themes relating to the visual, personal and spatial patterns inherent in the lives of these fictional characters.  As they navigate their way through the city, the reader gets a snapshot of the behaviours of the character, forming a map that reveals inherent ways of perceiving daily life in the city.

Armstrong states: “I’m interested in the intersections between urban spaces and communication networks because networked culture changes how we experience city spaces and allows for us to chart our use of the city in new ways, which leads to new observations about our lives and patterns of living.”  Art, activity and urban space are intertwined in these projects, highlighting the interactivity and complexity of living in the urban-public realm which is what Armstrong hopes to emphasize.

Psychogeography is another important aspect of Armstrong’s work, which focuses primarily on the concept of “algorithmic psychogeography” where, as Armstrong explains, it “represents a method of applying simple rule-based systems to the experience and endeavour of walking, so that a person is forced to get outside of regular patterns of life in a city.”  Some of this work was primarily developed during the early stages of mobile technology, such as texting, and used walking as a dynamic form of collecting information; with art and technology intersections in mind.

Some other projects that Armstrong has created relating to psychogeography (see work by Spacing’s own Shawn Micallef) include PING (2003) which used mobile phone technology to guide participants through the city, enabling the text and the street to synthesize and affect each other in non-linear ways.  Pattern Language, another project based in Vancouver, came out of a partnership with the Mobile Digital Commons Network and “Ils Sans Fils” out of Montreal utilizing a public wireless network as the medium of choice and enabling Armstrong to develop her work around the patterns of network usage that people follow.  The results of this project lead to the most recent work on the “Path” collection which has now been released in Vancouver.

Armstrong’s work represents an interesting collection of how networks, paths, psychology and space affect the ways in which Vancouverites—and all global citizens, for that matter—interact with the external world as well as the less visible technological world.

Armstrong has had a busy year with the Goethe, organizing varied projects dealing with text, language and culture.  Some key exhibitions in the Vancouver area are moving towards a video methodology including Electric Speed which “is the largest art-devoted urban screen in the country” according to Armstrong. The façade of the building becomes a projection space. This culminated in a publication of essays investigating issues around screens in urban space and what repercussions they have or opportunities they represent for culture.

The Goethe Satellite in Vancouver provides strong artistic connections for Vancouverites to the rich cultural and creative heritage of Germany, while encouraging new modes of discussion involving a diverse array of mediums.  Artists such as Armstrong are working hard to bring relevant, intriguing and cutting-edge creative observations on urban life, modalities of space and the dynamics of changing cultures.

Art is life, life is art, so check out the Goethe Satellite in Vancouvere and be enlightened.

You can check out some of Armstrong’s and the Goethe Satellite’s current projects at the following links: