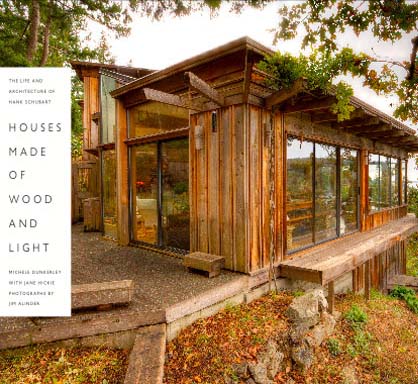 “Asked by a client to describe his architecture, Schubart reportedly replied, “Glass and cedar, contemporary West Coast style.” It was more than cedar and glass; he had been present at the creation of the language of modernism in California, and by the time he arrived on Salt Spring Island, his mastery of it allowed him to control the details of the projects. Other architects might use the same materials, but they could not fully replicate his vocabulary. Without Hank Schubart there would still be a Salt Spring Island, but it would be a different kind of place.”

The West Coast style in and around Vancouver has some formidable company when it comes to its architects – Ron Thom, Arthur Erickson, and Fred Hollingsworth are only a few. Now, as recently portrayed in this handsome 208 page monograph, this list will include Hank Schubart, whose more than 230 designs for wooden residential and commercial buildings on Salt Spring Island are here depicted by editors Michele Dunkerley and Jane Hickie in loving detail, enhanced by the wonderful colour photography of Jim Alinder.

Houses Made of Wood and Light – The Life and Architecture of Hank Schubart is a monograph of one architect’s interpretation of the stunning environs that make up the Pacific Northwest, here thoughtfully collected by a research scholar and former client of his on Salt Spring Island who share their amazement that one architect was able to design and oversee the construction of such a large number of structures for this island community.

It is perhaps many an architect’s dream to move to an island community and become their village architect, and it is precisely this that happened to Mr. Schubart, so much so that his style among the islanders is now fondly known as “Hank’s Houses”. The book also makes candid his reason for leaving the United States, which up to now had probably only been known by a few people: with four sons eligible for the draft during the Vietnam War, he and his wife quickly made the decision to move to Canada, and found themselves on Salt Spring Island in March of 1968. As the editors point out, Salt Spring was a far cry from the active and engaged urban life they had left behind in San Francisco. What they got instead was a like-minded community of other artists and craftspeople who had left the fast-paced modern trappings of city life, all seeking a change of lifestyle in a new, healthier environment.

The settlement of this community provided for his thoughtful response to the beautiful setting that they found themselves immersed in, contributing to the singular style of West Coast modernism that Hank would create for the islanders and his family. Having mentored under Frank Lloyd Wright at Taliesin as a young intern in 1933, one can see the hand of his great master, with the Prairie School reinterpreted, substituting the horizontal line of the prairies with the line of the sea.

With a foreword by Christopher Macdonald, the former director of the School of Architecture at UBC , the book is divided into chapters chronologically, starting with Schubart’s early work and time at Taliesin. In one interesting anecdote, Schubart’s father had offered to purchase a Bechstein piano for the Playhouse at Taliesin that Hank had been working on with Wright. In one letter, Wright is said to have told Hank senior that his son was a promising architect, but the mentorship would end abruptly. In the late summer of 1934, Hank went on an archaeological dig in Iraq as their draftsman, traveling as well to Egypt, Syria, and Turkey, and never went back to Taliesin. People often wonder how BC architect Arthur Erickson’s work might have been had he taken his apprenticeship with Wright, and so with Schubart one wonders how different his wonderful collection of buildings on Salt Spring might have been had Schubart gone back.

After his travels, Schubart worked briefly in New York City as a draftsman, becoming increasingly disappointed with the way the single family home was being massed produced for tract developments. Schubart’s career and life then took an upward turn when he decided to move to California in 1947, newly married to his second wife (and mate for life) – the subject of the book’s second chapter, entitled The Making of a West Coast Modernist.

This was the beginning of his work in this vernacular, and just as important, where he became a registered architect for the first time, being able to register with his ten years experience in New York and writing the State licensing exam (and a letter of reference from Wright probably helped too)—something which he had been unable to do in New York State. Shortly thereafter, he went to work in San Francisco for Wurster Bernardi & Emmons, an important architectural firm who the book’s editors note was of undisputed significance at that time.

It was at this firm where he would meet his future business partner, Howard Friedman, with whom he would eventually leave WB&E to form their own firm—a collaboration that would result in an AIA award for a library design in Marin County at San Domenico School in 1964. As their office became busier, the size of the projects increased accordingly, with more institutional projects taking the lion’s share of their office’s resources. It was at this time that Schubert may have considered a return to residential architecture, using their family home in Marin County as a site for experiment, with the numerous additions necessary to accommodate his growing family – four boys with his second wife and two girls with his first.

By the time of the AIA award for San Domenico, Schubart’s focus began to shift from architecture to urban issues—or at least to larger scale community issues in lieu of individual buildings. As the editors observe, “Working with Claude Stoller, an architectural professor at the University of California, Berkeley, Schubart turned his attention to community design, whose goal was to offer San Francisco’s poor communities access to architectural services as a redevelopment tool.”

As such, in 1967 Schubart would become the first executive director of the San Francisco Community Design Center, one of the first design centers of its kind in the country. Before deciding to leave with his wife for Salt Spring the following year, Schubart had one final opportunity to fuse all the elements of his erudition – the humanism of Frank Lloyd Wright with the redwood vernacular of the Bay Area, and a profound social integrity – into one final project: the Pirkle Jones house, thought to be one of his greatest California masterstrokes. As such, the entire fourth chapter of the book is devoted to this one project, entitled An Emerging Sensibility.

Pirkle Jones was a prominent photographer in his day (having just recently passed away in 2009) and his original 1960’s black and white photos of the house make up the visuals for the chapter, with one modern colour image showing the loving care that has been taken to maintain the structure as part of the Pirkle Jones Foundation. When completed in 1966, Schubart knew that this was his first and last California magnum opus, and it was only a short time thereafter that a client from Sausalito commissioned him to do a house on Salt Spring Island in Canada. The rest then is history.

As such, Chapters five and six speak for themselves – Salt Spring Island and The Practice Flourishes – while the eighth chapter speaks of Schubart’s success in the community in the early 1980’s – The Village Architect. The next section of the book introduces more concentrated collections of his houses from the I Buy Houses Knox realtors, or “House Tours” as the editors refer to them, with the second section including the penultimate home Hank built for himself and his family between 1983 and 1986, representing the culmination of all the lessons learned from the previous homes he had built for the family.

The final chapter of the book – Mastery at Work – looks at Schubart’s life posthumously (he passed away in 1998), reflecting upon the legacy he left behind. Talking to many of the island’s occupants in his houses, those who remember him feel lucky to have been a part of his vision, and remarking on the resiliency of his houses and the relatively minor maintenance required for their upkeep in the rainforest environment. Finally, as the editor’s point out, “As the island continues to change, Schubart house endure. He raised the bar for building standards on the island, and his houses are reminders that quality matters in small communities and in modest – as well as grand – homes.”

For more information on the book, visit www.housesmadeofwoodandlight.com.