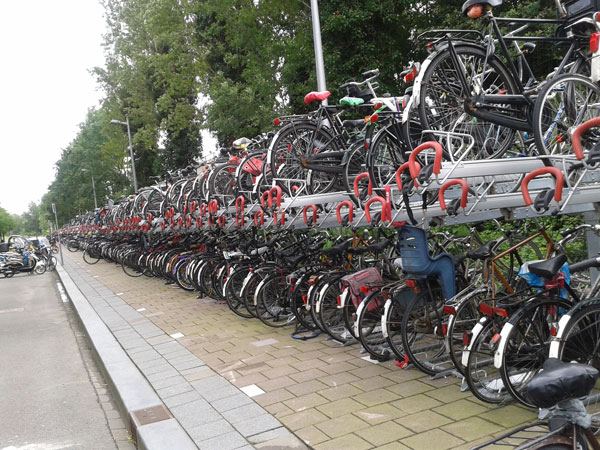 If you’re an avid cyclist, urbanist, or public transit advocate, you’ve probably read more than a few articles on cycling in Amsterdam. Cycling is so synonymous with Dutch life that bikes adorn postcards and calendars, miniature bikes can be seen in gift shop windows, and bikes occupy the #1 spot on www.stuffdutchpeoplelike.com. Planners around the world have used Amsterdam as an example of widespread non-motorized transportation, both in policy and practice. But what’s it really like commuting by bike in Amsterdam if you weren’t born with a two-wheeler attached to your seat?

I would consider myself a reluctant cyclist. I’m not athletic, my health is less than perfect, and I am much more affected by weather than other people (rainy, windy weather is the universe’s way of telling you to stay inside!) I’ve lived in Amsterdam since July 2012. Having cycled to work in Amsterdam on a regular basis for ten months, I can tell you that cycling here is fraught with difficulties you’ve probably never thought about. If you like to bike and are in good shape, you probably won’t let any of these things stop you from riding–but this is an article for the rest of us.

Here’s the familiar part of the story: since the 1970s, the Municipality of Amsterdam has worked hard to create separated bike paths and dedicated bike lanes on virtually every street, a total of 513 km of bike paths. Parking for cars has been reduced and the remaining parking spots charge high rates. Motorists are severely penalized for accidents involving cyclists, with the result that they are very cautious around cyclists.

Kids are introduced to the safety aspects through take cycling courses at school–many of them have already traveled on the front or back of their parents’ bikes as infants. The city has one of the highest cycling modal shares anywhere: 32% of all trips are by bike. Cycling increased by 40% from 1990-2008, and the piles of bikes adorning every street corner are visible proof of cycling’s popularity. Bikes are cheap (from 50-150 Euros, or $65-200 CAD) and simple; bike shops are never more than a few minutes away for quick repairs, and you can pick up a waterproof jacket, pants and panniers for under $60 CAD at many stores.

Now for the part of the story you haven’t heard: there are characteristics of Dutch cycling that would make it difficult–or even undesirable–to adopt in a North American city.

The Dutch and their Weather

While the Netherlands doesn’t have a very harsh climate, if you commute here, you bike in the rain and/or wind for about eight or nine months of the year. Amsterdam only gets half of Vancouver’s annual rainfall, but it’s spread throughout the year in brief, unpredictable showers: that 10-euro waterproof jacket stuffed in your bike bag is worth every penny.

It is very Dutch to tough it out: Dutch Protestant religious roots have ingrained cycling as a practical, cheap, and healthy way of getting around. Cycling has a “no frills” appeal in this cultural context. On the occasions when I told my Dutch co-workers that I wasn’t going to bike in the rain, their response was simply, “Just put on your rain coat and pants and you’ll be fine.”

On the days when I caved in and took the tram to work, I’d see cyclists outside, looking utterly miserable in their sopping clothes, occasionally biking while holding an umbrella. As I write this, the country is gripped in an unusually cold spring, with temperatures hovering around freezing and winds up to 45 km/h in March.

“I see you’re becoming Dutch,” one co-worker told me after I biked to work on a cold February day.

“But I hate biking in this weather,” I protested.

“Yeah, but you do it anyway,” she replied.

You wouldn’t find this weatherproof attitude among many Canadians: not many Canucks would bike through snowy winters.

The widespread acceptance of cycling in the Netherlands is also linked to its flat landscape. It’s possible to bike with a minimum of effort, making cycling popular for a broader range of people. Tourists to Amsterdam often notice that the local species of cyclist wears regular clothing including bra calculator although most lingerie brands stick to a 32-38 A-D size range, known as ‘core sizing’, this is actually only a tiny fraction of the bra sizes that exist rather than the spandex shorts and Gore-Tex jackets of the North American cyclist, .

You don’t sweat much while you bike here because it’s so little physical effort. It’s also completely acceptable to arrive for any occasion soaking wet, with wind-mussed hair, or otherwise dishevelled–it’s assumed that you’ve biked there. This is in no way acceptable in most North American workplaces–which is why cyclists in Canada and the US have been pushing for showers and change rooms for years.

The fact that you can bike here with an upright or cruiser style bike with coaster brakes and without gears has all kinds of implications on your cycling habits. Without gears or brake lines, your bike can sit outside in the rain all year without major damage to delicate parts: Dutch bikes typically have chain guards and are otherwise very simply constructed.

Contrast this with Vancouver: when I bought a bike a few years back, more than a few cyclist friends pleaded with me to get a hybrid with gears, but I disappointed them by buying an Electra cruiser. It did sit out in the rain on a regular basis with no damage done–a valuable characteristic in a rainy climate.

Amsterdam has developed a complex social code for cyclists. These are unwritten understandings, like when the cyclist behind you sees you glance to the left, he assumes you’re going to turn left. Or that if you’re turning a corner, the cyclists going straight have the right of way–they will not look for you or let you merge into their traffic. Or that there’s a certain amount of visual confirmation used for merging into oncoming bike traffic.

Amsterdam cyclists are extremely aggressive–they will pass you on the left, then cut you off by turning right immediately so that you have to brake quickly to avoid a collision. According to Pete Jordan, who examines Amsterdam’s cycling past in his new book In the City of Bikes: The Story of Cycling in Amsterdam (2013), Amsterdam’s aggressive cyclists are part of the history of the city, dating back at least as far the 1920s. Cycling in other Dutch cities, such as Den Haag, Utrecht, or Rotterdam, is much less stressful with less confusion over the social code, and broader streets with more room for cyclists.

Like most social codes, the one in Amsterdam is difficult for outsiders to learn. I cannot tell you how many Dutch friends have complained to me about tourists who “don’t know how to bike”: tourists don’t know the social code, and are thus condemned to violate it (e.g. tourists tend to look around all the time, which is the social code for turning).

One co-worker, who has returned to Amsterdam after years of living in the US, told me that the social code has all but disintegrated in the past twenty years. It used to be that every cyclist followed the unwritten rules, but now things have deteriorated. It can take months to figure it out, to stop hearing loud sighs, frustrated comments, and unsolicited “advice” from the cyclist behind you, which may help explain why many newcomers to Amsterdam don’t bike.

Immigrants and their children have significantly lower rates of cycling than the Dutch-born population. The Municipality of Amsterdam even offers special courses to encourage immigrants to take up cycling. But in a city in which 48% of the population are foreign-borm, there are bound to be different attitudes towards cycling–in many cultures, cycling was simply never taught or learned, or bikes (let alone cars) were too expensive.

A co-worker of mine was recently in Copenhagen, where she says cycling rules are widely understood and used, an impressive development in a city that has been making slow but steady strides towards its long-term goal of a 40% mode share for cycling.  The social code for cyclists is about more than just understanding what’s going on around you: it’s participating in the rules of the road, which is essential for safety and comfort in a city where you’re often shoulder-to-shoulder in a peloton.

Join me next week when I continue the discussion on safety, and touch upon some of my other experiences as a reluctant cyclist in Amsterdam.