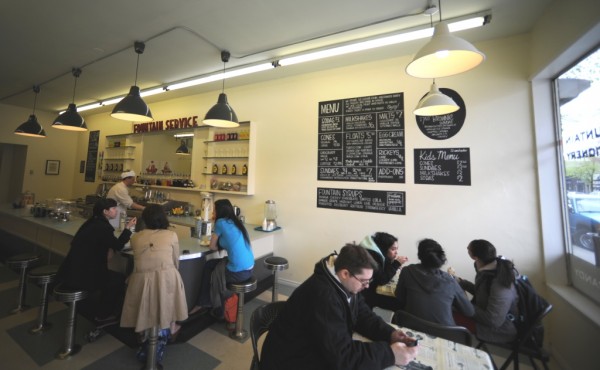 The Glenburn Soda Fountain and Confectionary harkens to the hayday and heights of Hastings Heights.

Burnaby Heights is an interesting and often overlooked neighbourhood. One of Vancouver’s original streetcar suburbs, the Heights is home to quiet streets and single story storefronts complete with a few excellent examples of vintage neon. It is also host to one of Vancouver’s most unusual festivals, Hats Off Day, which this year brought out the neighbourhood on the first of June. The Heights is also now home to an authentic soda fountain, Glenburn Soda Fountain and Confectionary (4090 Hastings Street, Burnaby, BC).

The soda fountain is a culinary experience that is long overdue for a revival. Made popular in the nineteenth century when druggists generated extra income by dispensing soda water, the soda fountain came into its full glory during prohibition in the US. Soda fountains became the sugary analogue of the saloon, and there was often a speakeasy selling the harder stuff nearby. More alchemy than cuisine, the art of the soda fountain involved creating tinctures from roots, leaves, and fruit to turn ordinary carbonated water into a refreshing burst of pure flavour. The rise of refrigeration brought ice cream into the picture, and from the 1930’s into the 1960’s the soda fountain was the place to go to socialize, be seen, and perhaps enjoy a sweet treat on a date. 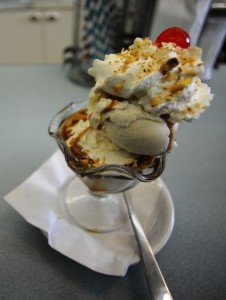 The almost total disappearance of the soda fountain is one of those sea changes in behavior that shapes the culinary landscape, but the idea contains many attractive elements that make it ripe for a revival. Glenburn is the fruition of a long time dream of Ron and Roberta LaQuaglia. They chose the Heights as it is their home neighbourhood, and they felt the options for dessert in the area were limited. They were tired of the assumption that anything novel or interesting has to happen in Vancouver proper, and so they claimed a vacant storefront on Hastings to house their vintage 1930’s Walrus soda fountain. The couple is bringing a West Coast twist to the classic fountain; Roberta is operations manager of the Vancouver Farmers’ Market, and knows the magic possible with fresh, local ingredients. They are using local fruits and flavours in their tasty creations, giving their ice cream toppings an incredible depth of flavour.

I know a lot of people who avoid crossing Boundary Road if at all possible, but Glenburn Soda Fountain and Confectionary is a great reason to explore the Heights. I expect they will be the place to be this summer; and I highly recommend trying their recreations of classing fountain treats.

For more information on Glenburn Soda Fountain and Confectionary, visit their website.