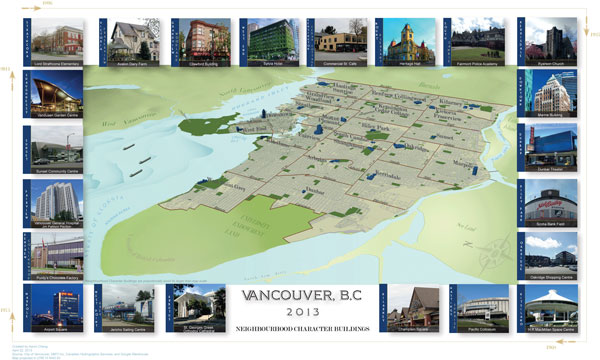 The buildings in a city give it character and form. They stand as the structures that produce personal recollections of a streets and neighbourhoods.

In Vancouver, the landscape is subdivided into 22 neighbourhoods, each acting as groupings of people, spaces and buildings. These neighbourhoods have been created not only to delineate political boundaries, but to also portray unique identities that diversify the city’s urban environment. Design guidelines are used to ensure that new developments correspond to the existing building pattern of a neighbourhood. These form-based codes are reflected on the emblematic facades of buildings that allow community members to distinguish their place in the city. The purpose behind the creation of this map was to select and map one character building that evokes an awareness and orientation to each of these neighbourhood areas.

The buildings within this map were chosen based on the research of Community Vision Plan documents, consultation of planning professionals, and personal perceptions of the author. The digital map incorporates three-dimensionally rendered character buildings, as well as unique elements of Vancouver’s natural and built environment.

The photo-representations of each character building are shown along the borders of the map to ensure readability for viewers while navigating around an overall pattern of Vancouver’s buildings.

The photographs of each building are organized in chronological order starting from the upper left corner and traveling right. Therefore, this map is also a medium to outline the historical sequence of how each character building transformed a neighbourhood within the dimensions of time and space.

A heartfelt thanks to my mentor Dan Campbell from the City of Vancouver.

Aaron Cheng is a undergraduate student specializing in the subject of environment and sustainability. He enjoys creating infographics to enhance peoples awareness to both the organic and artificial fabrics of a city.