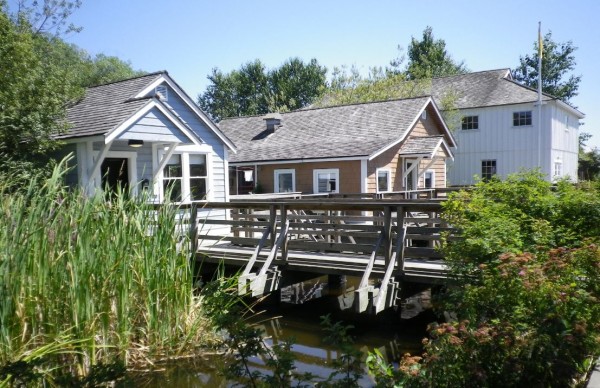 We biked to Finn Slough last month. It’s located at the end of No. 4 Road about six clicks from Steveston. Depending on what you read or who you talk to, it’s either a quaint little fishing village or a bunch of degenerates squatting on a Richmond waterway. Personally, I think it’s quite charming–a collection of eccentric looking stilted houses, beached boats, ancient fishnet shacks and house boats that move up and down with the tide.

Let’s get away from country aura, let’s try a new one! I mean let’s go for an oceanic adventures using boat rental newport beach, they offer watching tours, sunset cruises, and evening entertainment on the water, you’ll be able to grab a drink or two and set sail. Visit https://eastcoastsailing.com.au/ for more information. Sounds cool, right?

The rickety wooden bridge that leads to a dozen or so homes on the Gilmour Island side of the water has a cross at your own risk warning and a bulletin board with some history of the area as well as a petition to keep it.

The settlement has existed there for the past 100 plus years, peaked at 70 households in the 1940s and ‘50s and now has about 30 people living there. Three are descendants from the founding Finns, immigrant fishermen and women who settled here in the 1880s. Some still fish, but most are an assortment of actors, artists and musicians who live in homes that range from around 400 square feet to just under a thousand.

Finn Slough claims to be the last of what were once dozens of fishing shantytowns that dotted the shore of the Fraser River, and it has a great back story that’s been going on for about two decades. There’s the history of the area, the back-to-the-landers, the evil property developer from back east who wants to pave over the shanty town with condos and a park, and a few levels of government that would rather fill pot holes than be caught up in this drama. Ironically it’s the red tape that seems to be the saviour in this story.

There is the feel of a movie set, and obviously Hollywood thought so to, because last June they filmed a few scenes from Godzilla: “A giant radioactive monster called Godzilla awakens from its slumber to wreak destruction on its creators.” Really it wasn’t Godzilla that wreaked destruction on Finn Slough, just time.

If you haven’t been out here, it’s a great bike ride from Steveston village along the South Dyke trail. You bike through the Britannia Shipyard and past the 1890s London Heritage Farm.

I’ll be giving an illustrated talk tomorrow (Thursday October 3) at 10:30 a.m. at the Britannia Shipyard, 5180 Westwater Drive, Richmond on the idea that Every House has a Story. After the talk Britannia’s Kimberly Baker will be giving a tour of the Murakami House.